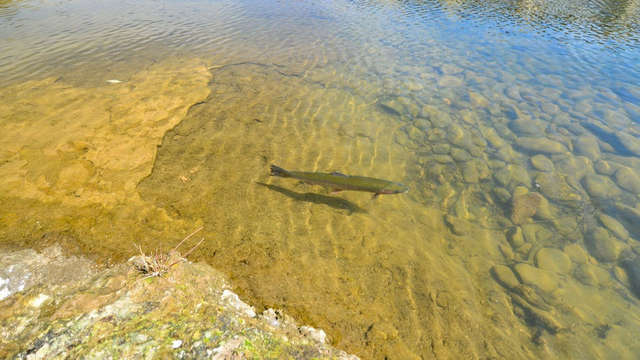 Hundreds of thousands of young salmon are released into the waters of Limburg every year. For eight years. However, the population is still far from stable.

“We clean with the tap open,” says Thijs Belgers of the Visserij Beheercommissie Roerdal. In recent weeks he has released around 1,500 young salmon at Vlodrop. This is one of 130,000 young salmon and eggs that will be released this year.

Stable population
This repopulation aims to eventually form a stable population in Dutch waters. In Limburg, at least fifty salmon are needed every year to return from spawning grounds in Germany. “Now there are only six,” Belgers said.

Read also : Almost no more salmon in Roer due to the hot weather

Currently researching
Arnold Jansen of the Limburg Water Authority is aware of the noise problem at the Roermond power station. “It appears to be a buzz that fish feel underwater. They are currently investigating this with the Roerdal Fisheries Management Committee. If research shows their current approach is not working or is insufficient, Jansen will consider a different approach. solve the problem properly, ”says the director of the Water Board.

Read also : Doubts about the survival of salmon and brown trout in Geul

350 kilometers
Salmon are anadromous fish, that is, they swim in rivers from the sea in search of their spawning grounds. This spawning area is mainly located in the German Eiffel, the fish terminal station. The salmon “enter” the estuaries of the Meuse in Zeeland and South Holland and advance through the Meuse towards Germany. The last part of the route to the Eiffel takes the salmon across, among others, the Roer river, an arm of the Meuse.

Ten percent groundfish
The agony of the salmon was also translated into the legal field. For example, the owners of the Lith and Linne hydropower plants, Vattenfall and RWE, have filed a license complaint that requires them to ensure that no more than ten percent of passing fish is ground in the turbines of the hydropower plants. .

The two energy giants challenged this license clause and were ruled in favor of the highest court in January this year. “The minister must take a new decision on the authorization request”, was the verdict of the Council of State. As a result, the ten percent standard is no longer in play for the time being.

Meuse salmon
“The consequences for the ecosystem are dramatic. The natural process simply does not want to start. We are still dependent on the release of salmon brood (raised salmon eggs, editor’s note) and young salmon,” explains Belgers. For now, this salmon spawning comes from a nursery in Loire-Allier, France. But in the long run, the salmon returning from Germany will have to take care of the spawning of the salmon themselves. Ultimately, this should lead to their own stock of Meuse salmon.