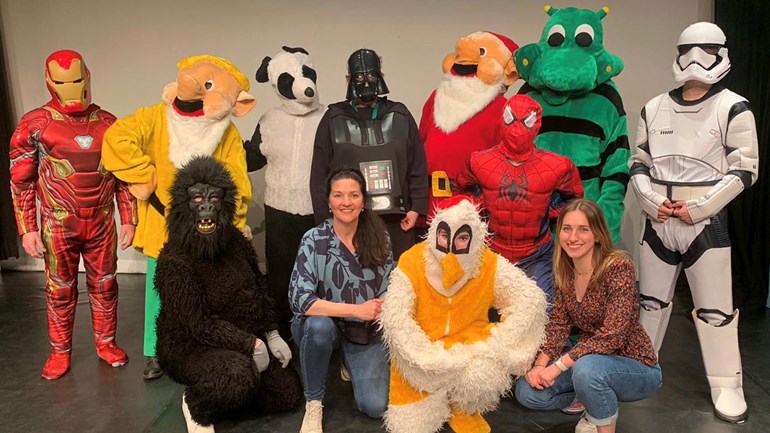 The initiative was taken by Ilse Melissen and Eva Martens-Pijpelink, two teachers who do something fun with their students several times a year. “But that’s currently not possible because of the crown,” Martens said. “That’s why we designed this fun activity that every student, colleague and parent can participate in. It is something different.

They did not come up with the concept themselves. It is inspired by the successful program The Masked Singer. “A high school in Etten-Leur also did it,” Melissen said.

I was particularly impressed with Spiderman, he has loose hips. “

Melissen and Martens are not only the initiators, but also present the program. Melissen: “Yes, that was a bit new, but a lot of fun to do. We also ask the characters a number of questions, which they can only nod or shake their heads with. Of course, we hope that the we’re talking about school and everyone guessing who the monkey or the chicken is, for example. “

The participating characters include a chicken, two gnomes, a dinosaur, Iron Man, Darth Vader, Spiderman and a monkey. According to the ladies, it was not at all a problem to get the teachers to wear such a costume. Martens: “We made a call through our newsletter and got a lot of responses. We even had to rent more costumes because we hadn’t counted on them.”

The registrations are now complete. For the next ten weeks, a video will be posted every week on Mondays showing a character dancing to a song. On Wednesday, the same character is then interviewed, after which the students can guess who is in the costume.

At the end of the school year, the characters will be revealed and the class of students who guessed the most teachers and staff correctly will win a prize and of course eternal fame. The program can be followed via instagram and the Goese High School facebook page, Bergweg location.