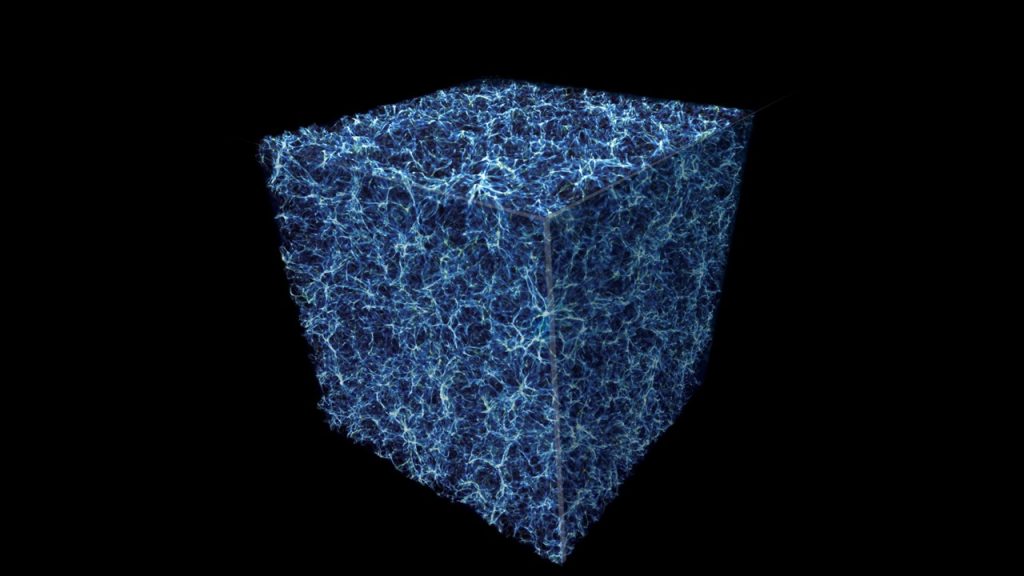 It seems inefficient: looking for dark matter in a place where the substance is scarce. Yet these physicists are proposing exactly that.

Every month, I send Editor-in-Chief Naomi Vreeburg a list of possible topics for this column — and every month there’s a study that’s somehow related to the search for dark matter. ‘Again?’, I hear Naomi exclaim in my head when I click ‘send’. But yes, it is one of the hottest topics in physics and astronomy.

It’s not strange at all. Five-sixths of the universe appears to be made up of dark matter, in other words: particles that we cannot see, but which influence their surroundings through their gravity. Well, if your job is to understand the universe, the fact that the particles that are most abundant in it leaves you completely perplexed is a bit… awkward.

Among recent attempts to get rid of this painful problem, I noticed a study in which the authors suggest looking for dark matter in the vast expanses of empty space between galaxies. Strange, I thought: not only is there little ordinary matter there, but also little dark matter. Why would you look for it in those places? Luckily, Naomi allowed me to type on this a bit, which gave me an excuse to dive deeper.

First things first: how do you even search for dark matter particles in the universe? Two processes are important here. First, such a dark matter particle can decay into ordinary particles. In addition, such a decay process can produce gamma radiation. And we have been able to observe this radiation with a specialized space telescope, such as the Fermi Gamma-ray Space Telescope from NASA and the US Department of Energy.

Second, two dark matter particles meeting in space can destroy each other. Both particles disappear and their masses are converted into radiation. Likewise, this process can also produce a signal that we can see.

But the universe is not composed entirely of dark matter. It has many other inhabitants, some of which also produce gamma rays. It is therefore quite difficult to distinguish gamma rays from dark matter, for example, from gamma rays from supermassive black holes at the heart of galaxies.

And that’s where we come to the idea of ​​Italian astronomers Stefano Acari, Elena Pinetti and Nicolao Fornengo. They decided to find out where in the universe it was best to look for dark matter.

In densely populated areas with lots of dark matter, but also many other astronomical objects that make your measurements more difficult? Or in the emptier parts of the universe, where there is little dark matter to be found, but also fewer objects that produce the same kind of radiation and thus complicate your search?

The latter seems to be the best option, as Acari and colleagues show in their article. At least, if you’re talking about gamma rays from dark matter particles decaying into other particles. Encounters between dark matter particles that end in mutual destruction are quite rare in the vast voids between galaxies. So you don’t have to rely on this type of gamma radiation when you go looking for dark matter in these regions.

But we can therefore look for decomposing dark matter particles in areas where, paradoxically, they are quite rare. Unfortunately, this will not work with our current space telescopes, such as the already mentioned Fermi Space Telescope. In their article, Acari and his team therefore fantasize about a more efficient successor on all fronts and which they call, in the Italian way, Fermissimo: the superlative of Fermi. If you let him study the cosmic voids, he might reveal any dark matter strewn about them.

Only: before such a thing is built and operational, it will of course be quite a few years later. So Naomi can expect more Far Out proposals in the near future from scientists who believe they can boost the hunt for dark matter. Because twiddling their thumbs until a Fermissimo-type viewer can settle the matter, the gentlemen and ladies of physicists and astronomers won’t. The whole dark matter story is just a little too embarrassing for that.