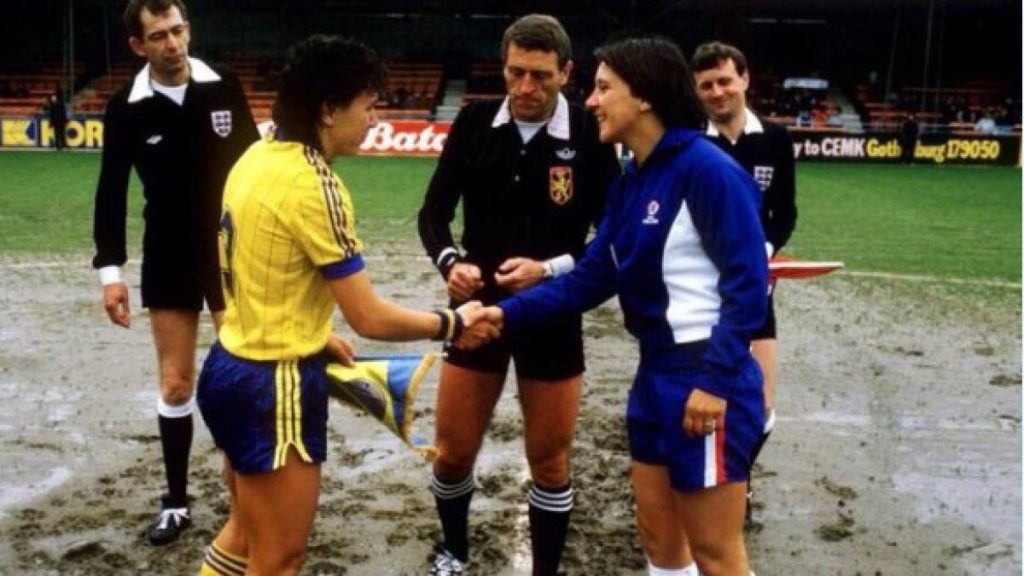 On May 27, 1984, in the prehistory of international women’s football, Sweden won the first European Women’s Championship. at the expense of England. The then second final game, in an unsightly mud pool in Luton, shows how far the sport has come 38 years later.

Sweden, Orange’s first opponents in the European Championship on Saturday night, celebrated at the time after a game that twice lasted 35 minutes and was played with a smaller ball.

A club of around 2,500 watched from the stands as Sweden crowned themselves after the penalty shoot-out as the first European champions in history. The images of this match, which can still be found on YouTube, seem to come from another world of football.

Only 13 years ago, in the summer of 1984, the English FA lifted the ban on women’s football. Without exception, the players had permanent jobs in addition to playing football: even the day after that final in Luton, some still had to report to the office.

The circumstances in which this European Championship was played were therefore not always pleasant. But the fact that a UEFA-recognized women’s final tournament took place was a huge step forward. It would also be years before the first World Cup was contested.

The assembly of the 1984 European Championship was special. The final tournament, in which four teams took part, was preceded by a qualification with sixteen countries. They were divided into four groups, based on their geographical location in Europe.

Below are animated images from the first final of the Women’s European Championship:

The Netherlands also participated in this qualification, in a group with Denmark, West Germany and Belgium, and were close to qualification. On the last match day, participation in the European Championship was finally lost, due to a defeat during a visit to the Danes.

The main tournament was played on a knockout system, with a home and away match. The final also had two duels, the first in Gothenburg and then this muddy match in Luton.

These two finals were played in very different circumstances. Swedish football was well ahead of that of other European countries. In Gothenburg the pitch was in order and there were twice as many supporters as on the return trip to Luton.

This first leg, won 1-0 by the local team, was widely covered by the Swedish press. England’s female football players were stunned when they saw how seriously women’s football was already taken in Sweden.

Conversely, the Swedish internationals are surprised in Luton that there is practically no press present, with the exception of a few Swedish reporters who have traveled with them. The game again ended 1-0, but this time for the English side. The shots on goal had to decide.

It’s no surprise that Swedish women’s football is so far ahead of other countries. Women’s sport experienced a revival in the 1960s. Even then, football was played in a well-organized fashion as a club.

Also, women’s football in Sweden was transferred to the national football association earlier than in other countries.

Over the years, other footballing countries have closed this gap with Sweden. The sport developed in the United States, South America and other countries in Europe.

Sweden has often come close to the first international prizes, but it has always gone badly. The country was a losing finalist at the 2003 World Cup and narrowly missed out on Olympic gold in 2016 and 2021. The 1984 European champion title is therefore solitary and alone on the Swedish list.

Just over 38 years after the mud fight won in Luton, the Swedish team wants to be the strongest again in a European championship. National coach Peter Gerhardsson’s team are among the favorites to win the tournament.

The Swedish national coach calls himself a “fan of the Netherlands”:

Sweden ready for their first opponent Orange: “I’m a fan of the Netherlands”

Midfielder Nathalie Björn knows it too, who sighs when asked why it’s been so long since her country won an award. “Every year we are among the favourites, but that’s also a good sign.”

She sees opportunities to strike with Sweden during this European Championship. “In recent years, we have really built something with our new coach. We have an experienced team, with whom we have already played several major tournaments. But now we want to achieve something even bigger.”