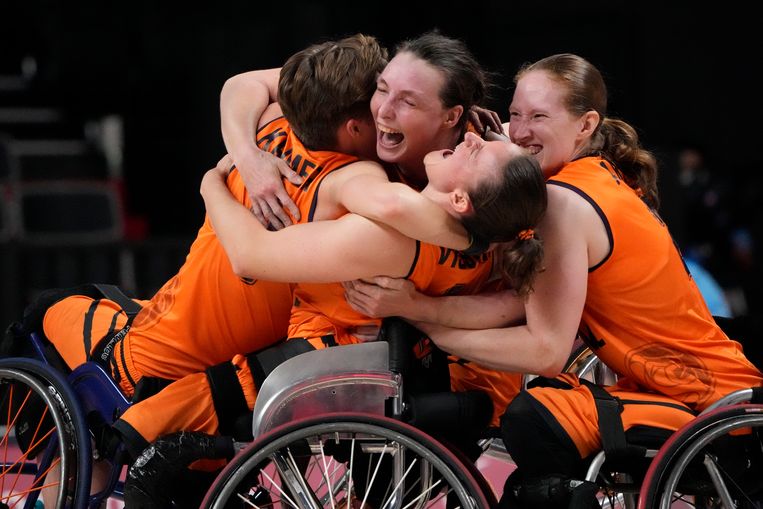 For ten years, national coach Gertjan van der Linden worked like crazy on the success of the Dutch wheelchair basketball team. He would take the women to Papendal, train them around the clock, seek shelter for his “rollers” and guide them more than professionally.

Van der Linden, himself the world’s best wheelchair basketball player of the 20th century, passed his enthusiasm and vision for the game on to players such as Mariska Beijer and Bo Kramer. He became world champion with the team in 2018, reigned over Europe, but Paralympic gold, the goal of the whole financially demanding operation, was out of reach for two editions of the Para Games.

In 2012 in London, the Netherlands finished third. Four years later, in Rio, there was again the disappointing bronze. Both times the German team were on their way to the final. The semi-finals against the German women were lost in these decisive years.

Thursday, at the Musashino Sport Plaza in Tokyo, the semi-final against the Germans was again on the program. As if it had to be. A loss in the group to China had forced the Netherlands as number two in the group into this possible stalemate.

Memories of London and Rio did their job. Nerves blocked the skillful Dutch shooting arms for a long time, but in the decisive fourth quarter the national five regained control and rolled to victory as if released. 35-36 behind (after three ten-minute periods of pure playing time), the grueling battle of the semi-finals ended with 52-42 in favor of the Dutch. The margin was wider than the real power difference.

For a long time, the match seemed to be an almost one-sided duel between Mariska Beijer and Germany. Beijer, named the World Cup’s Most Valuable Player (MVP) three years ago, lived up to her fame and found the basket for no less than thirty points. German women knew his strength. Long Beijer plays in the Bundesliga near Hanover. Because of her mobility in the chair, she is a “high pointer,” good for 4.5 points. A team can score 14 points. “Weak spots” such as Jitske Visser (1.0) and Ilse Arts (1.5) are used for this.

The problem for the Netherlands on Thursday was that Bo Kramer, the national team’s other top hitting player, failed under the ring. De Almeerse, the team’s dynamo with her easy acceleration and movements, got stuck for a long time in good intentions, but in the last quarter she broke free from confusion in her head. She scored eight points and maneuvered her team into a safe harbor. Kramer is a young woman who had to undergo complicated leg surgery at the age of 11 due to bone cancer. The right tibia has been replaced by the left fibula. She was a talented soccer star, but found a challenge in wheelchair basketball.

The joy of reaching the coveted final was intense, the players rolled on top of each other, and will be severely contained by coach Van der Linden who remained admirably calm on the day his team started messing around in the third. quarter time. In particular, veteran Carina de Rooij missed the simplest lay-ups and was relieved by Cher Korver, another Paralympic veteran.

The hunt for Paralympic gold will have to come at the expense of China on Saturday, which beat defending champions United States in the other semi-final. It will be a game with a long history. The Dutch, who have been playing wheelchair basketball since 1988, have never managed to win the most important medal. In 1996 they were close, but in Atlanta Canada was too strong. The money remained for the Dutch women.

Equally special is the story of coach Van der Linden. He was part of the men’s national team from 1988 (Seoul) to 2004 (Athens) and won gold once in addition to two silvers. It was in 1993, six months after the Barcelona Games. The final against the United States in front of twelve thousand spectators was lost, 36-39, but already on the closing night it became clear that the Americans would be disqualified.

A Yankee, David Kiley, a friend of Van der Linden, had taken a banned pain reliever for a sore toe. Three months after the ceremony the result was changed, the gold medals did not arrive in the Netherlands until February 1993 and the Americans fought against the decision of the CAS sports court until 1996 Van der Linden will wish a true golden tribute to Tokyo on Saturday.