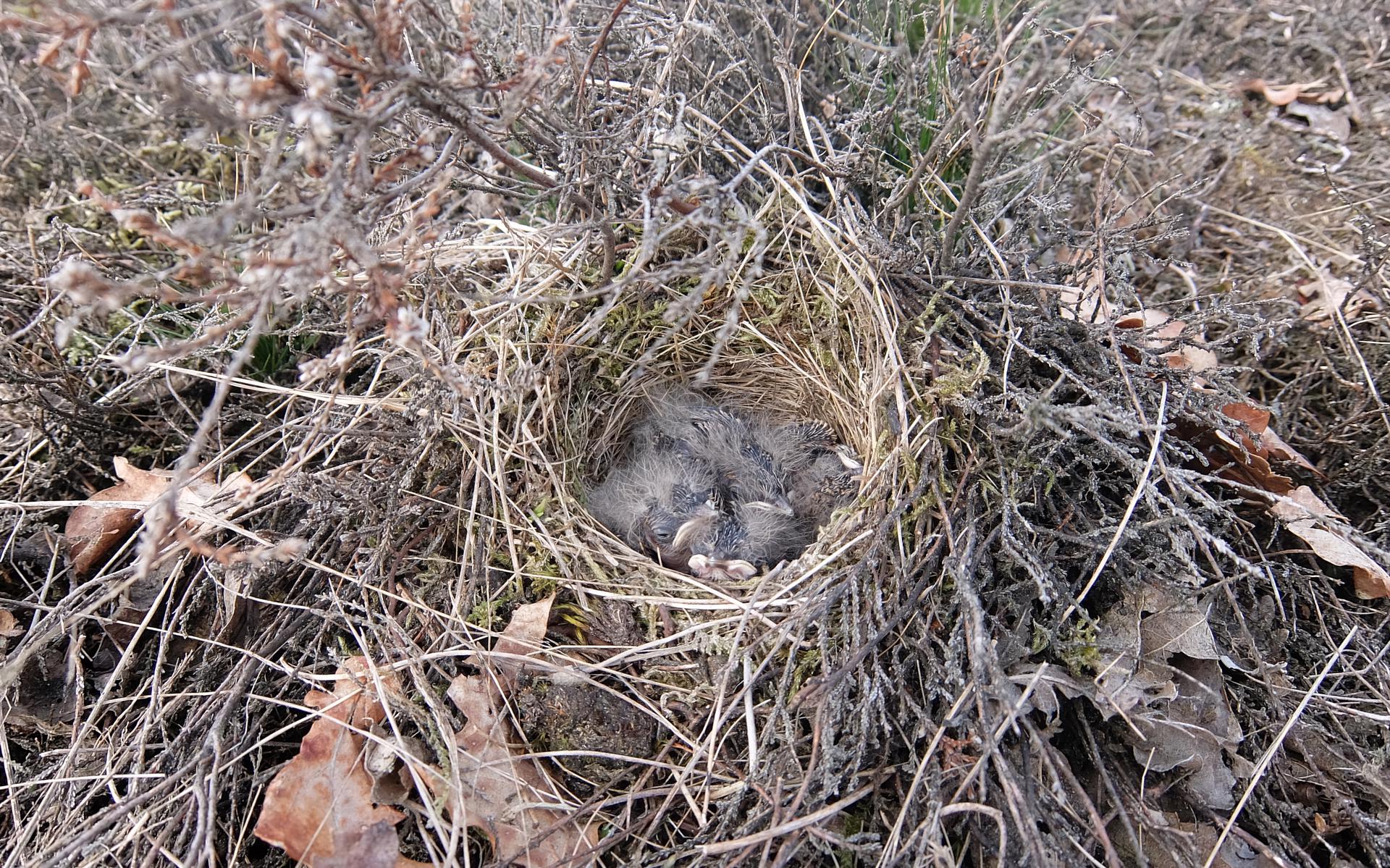 Nest with young larks. Own image

While the ears of wheat are just beginning to reproduce, the first young wood larks from Aekingerzand in the Drentse-Friese Wold almost fly away. There are now hardly any protected nests on the ground anywhere in the area, but thanks to the new signage and intensive protection and information, these vulnerable ground brothers of the Kale Duinen are moving in the right direction.

Sometimes such a nest is only a few meters from a hiking trail. The Forestry Commission therefore asks visitors not to follow marked routes. Dogs are not allowed from March 1 to September 1.

Wood larks nest in simple nests in low heather or in a tuft of decay. Due to their camouflage colors, the down boys hardly stand out. Wheat ears usually breed in or under a rotten tree stump on the Kale Duinen. Here they found a space where the female can hatch the eggs.

The Wheatear has become a rare breeding bird in the Netherlands and the Kale Duinen is the only area in the interior where a reasonable population still breeds. In recent years, however, many young have not grown due to disturbance and trampling, or the birds have been disturbed prematurely during breeding.

To avoid this disturbance and trampling of the nests, Staatsbosbeheer and Vogelbescherming, supported by the provinces of Drenthe and Fryslân, have been working on a protection program for some time. The Aekingerzand is very popular with hikers and other recreation enthusiasts due to the drifting sand plain and the views. Because sheep also walk, new paths were created everywhere, which were then used by people. Disastrous for the tranquility and breeding success of Northern Wheatear and Wood Lark.

In order to increase the area of ​​a suitable breeding area, Staatsbosbeheer, together with researcher Stef Waasdorp, started closing the vegetated parts of the Kale Duinen last year. This was found to be useful because breeding success was proportionately higher than in other years. This year the temporary signs have been replaced by signs with the text Vogelrestgebied.

The sandy plain is always open to the public, as is the passage to the watchtower and the marked hiking trails. This appears to have resulted in a mix between keeping the area pleasant for recreation enthusiasts and protecting vulnerable nesting birds. Since the measurements are relatively new, the researcher and the Forestry Commission are often on hand to provide information. Most people find it easy to organize something and therefore give the birds more peace and space.