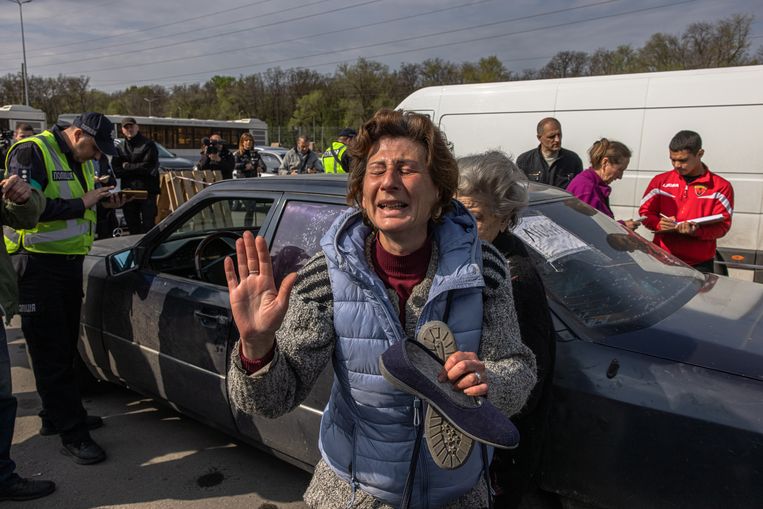 Uzmanova (37) arrived with the first group, mostly women and children, who had been hiding in the city’s large Azovstal complex. In this complex, which is still defended by Ukrainian soldiers, around a thousand civilians spent two months in underground tunnels and bunkers. Uzmanova says she fled to the factory because it was the only place she felt was safe: “I live there, I’ve worked there all my life. I knew it was safe there.

What life was like there, she told the BBC, and after arriving at a relief camp The Guardian. She hadn’t seen sunlight for almost two months, she said. It was too dangerous: “I was afraid to go out and get some fresh air. In the underground bunker where she was hiding, she was often no less afraid: “When the bunker started shaking, I was hysterical, you can ask my husband. I was so afraid that the bunker would collapse.

An elderly evacuee, presented without a name, recounts the hunger he suffered. The large stable complex in Azov was surrounded by Russian troops and sealed tightly so that water and food no longer entered. Everything was missing. The children in particular suffered from hunger: “The children always wanted to eat. You know, adults could wait.

When food and drink had become scarce, the bombardments had made escape impossible. Uzmanova and her husband were condemned to life underground, with injuries, deaths and the roar of bombs. “What we saw there was terrible.”

The only thing that comes to Uzmanova’s mind once outside is something she finds funny afterwards: “I told my husband: now we don’t have to go to the toilet with a flashlight. A tongue-in-cheek joke, but it describes how life in the bunker ultimately revolved around the most basic things in life.

The first group of around 50 evacuees arrived on Sunday in a convoy of buses, armored personnel carriers and UN and Red Cross representatives in the village of Bezimenne, 30 kilometers east. east of Mariupol. The operation was to continue on Monday with a second convoy. Ukrainian President Volodimir Zelensky announced on Sunday that he was expecting around 100 Mariupol residents in Ukrainian-owned Zaporizhzhya on Monday. But it didn’t go as planned.

Monday morning another group was ready to leave. The buses were supposed to leave at 8 a.m., but they had still not arrived by noon, according to Ukrainian sources. During the hours that followed, no more news came out. The entire evacuation – a joint operation of the United Nations, the Red Cross, Russia and Ukraine – was carried out in complete silence from the start.

The bunker where Uzmanova hid held. The Azovstal complex in Mariupol was built there during the Stalin era. A network of tunnels and bunkers has been built under the huge ironworks which should withstand any attack from the outside. About a thousand civilians are still hiding in this maze of tunnels, protected by probably several thousand Ukrainian fighters who are resisting a case of Russian force majeure.

After a long siege, the Russian army took the rest of the city of Mariupol last month, except for Azovstal. Vladimir Putin ordered his army to refrain from storming and to seal the compound so tightly that “no fly” could escape unseen. The assault does not materialize, but the bombardments do not diminish in intensity.

Videos emerged on the internet on Sunday showing the first people climbing the rubble underground, where they were laboriously guided over chunks of rock and twisted steel to waiting buses. After the buses left, the Russian shelling resumed immediately, according to Petro Andriusjenko, an assistant to the mayor of Mariupol, and the stragglers had to go back down to their bunkers.