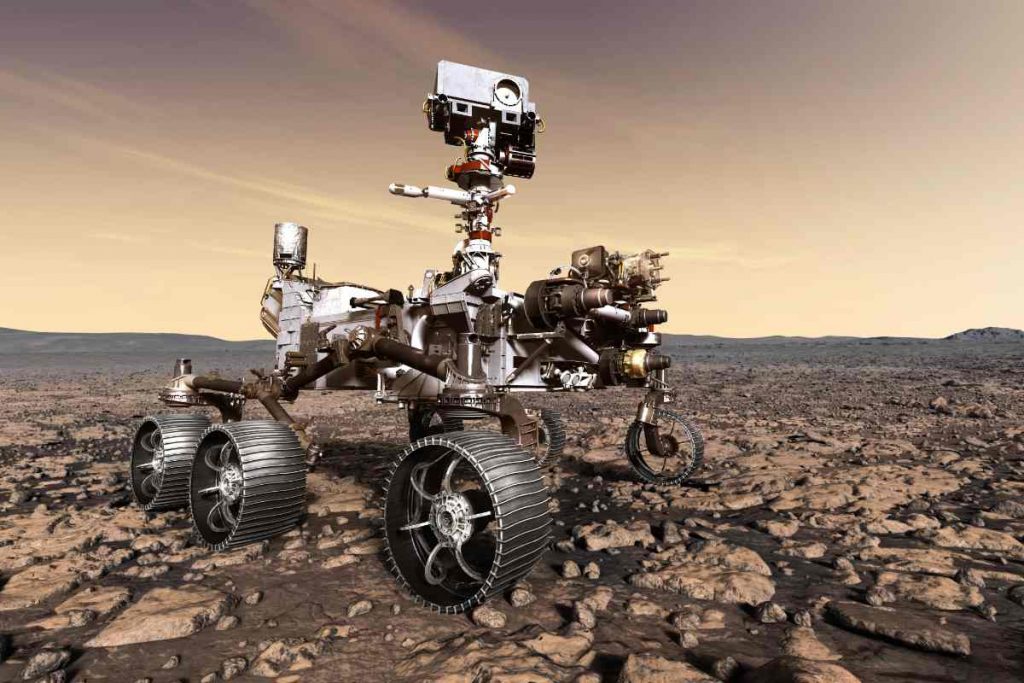 And it also tells us a lot more about the atmosphere of the Red Planet.

The Martian rover Perseverance has been researching our dusty red neighbor planet for at least eight months. To do this in the best possible way, the six-wheeled cart is equipped with various ingenious instruments. For example, the rover has two microphones, which add a new dimension to the way scientists explore the red planet. During this time, the microphones were deployed several times. And it turns out, surprisingly, there is a lot more to hear than expected.

Pickups
Perseverance has already picked up a lot of ambient sounds with its microphones. For example, nearly five hours of gusty wind were recorded, we heard rover wheels crack on gravel and engines purr as Perseverance moves its robotic arm.

Perseverance playlist
Meanwhile, the Perseverance on the Red Planet “playlist” continues to grow. While the rover was on its way to Mars, he made his first sound recordings. Then the rover, after landing in the Jezero crater, some ambient sounds on. For example, we could hear the wind blowing over Mars for a while and the microphones were recording the mechanical sounds of the rover. Then the perseverance proved to be – perhaps even more exciting – what his hunt for aliens looks like. Because the SuperCam – an instrument that can make images and sound recordings, but also detect the presence of organic substances in rocks – unequivocally picks up the rapid, ticking sound of laser beams. We were also able to listen what a ride on Mars looks like. And it doesn’t come easy.

These sounds allow scientists and engineers to experience the red planet in a new way – and everyone is welcome to join us. “Looks like you are there yourself,” says researcher Baptiste Chide. “The sounds of Mars have strong bass vibrations, so if you put on headphones you can really feel it.”

Atmosphere
Among other things, microphones are used to study how sound travels on Mars. And it also tells us a lot more about the atmosphere of the Red Planet. Sound travels through the vibrations of the air. Such research is quite interesting. The Martian atmosphere has a different composition from that of Earth. For example, Mars’ atmosphere is mostly carbon dioxide, while ours is mostly nitrogen and oxygen. This means that the higher frequencies on Mars are less audible than the lower tones. In addition, it is much colder on the red planet. Due to this cooler atmosphere, sound waves reach the microphones a bit slower.

More than planned
But now researchers have come to the happy discovery that there is actually a lot more to be heard on Mars than previously thought. For example, scientists were quite surprised when microphones picked up the buzzing rotors of the Ingenuity helicopter during its fourth flight. This allowed the researchers to cross out two of the three models developed that explain how sound travels on Mars. “Sound on Mars travels much farther than we thought,” said researcher Nina Lanza. “It highlights the importance of doing work on the ground. “

“Sound on Mars travels much further than we thought”

Maintenance
Incidentally, the ability to record sounds is not only relevant to research on the Red Planet. It can also be useful for the maintenance of future spacecraft. The cameras are currently often used to monitor, for example, wear on the wheels of the Martian rover Curiosity or the dust that accumulates on the solar panels of Marslander Insight. But microphones can also reveal all kinds of things about spacecraft health, like mechanics listening to a car’s engine to diagnose a problem.

The Perseverance team does not only use the microphones with which the rover is equipped to learn more about the red planet. The microphones are positioned so that scientists can also listen to the wheels and other internal systems. While there haven’t been enough recordings to detect changes, the intention is that technicians can eventually hear subtle differences. This will then make an important contribution to how the research team monitors the health of the spacecraft. “We would like to listen to these sounds regularly,” said researcher Vandi Verma. “After all, we also regularly listen to sound pattern changes on our test rovers here on Earth, which may indicate that there is an issue that requires our attention.”