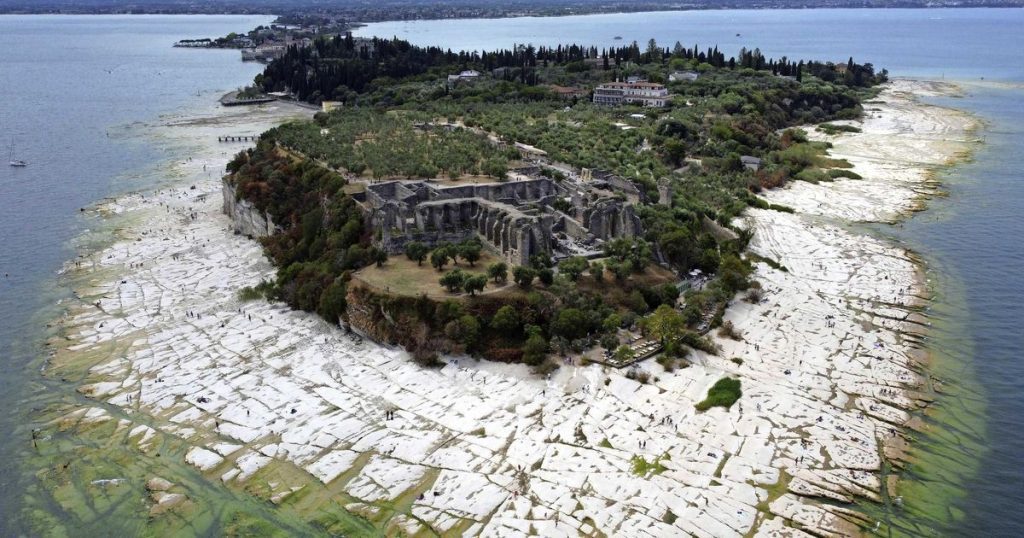 Tourists now have to walk a little further before they can cool off somewhat in the – now warm – water of the lake. The water level of the lake has visibly dropped. The reason for this is the persistent drought.

The rocks dried up to several meters below the normal waterline. In addition, the water temperature rises rapidly in the lake. The Sirmione peninsula is now surrounded by a halo of white rocks.

Overdevest: “The Italians we spoke to have never seen this either. It is extremely hot and dry. We have been there for four weeks with the motorhome. We were supposed to stay longer but left due to the heat. It was about forty degrees for days. Not normal.”

He also visited nearby Lake Iseo. Normally, the water reaches the wharf there. “Now a pebble beach has arisen spontaneously. You see all the people setting there. Weird.”

Shanna Uitterdijk has just returned to Zwolle after a three week vacation in Pacengo near Lake Garda. She says she has not bathed in the lake this year. “There was a lot of quicksand and it smelled terrible from all the plants that were suddenly above the water.”

Despite everything, Chiel Mulder still enjoys Manerba, along the shores of the lake. “It doesn’t stink here, you can just swim. And this heat? Carefree. It’s lovely here. But these rocks sticking out of the water are a strange sight.

Overdevest: “They also empty this lake for agriculture. If you walk around it, you will see the pumps. He shows photos of scaffolding three years ago and of the same scaffolding today: “More than a meter difference.

Northern Italy has not seen significant rain for months and there was little snow in the mountains last winter. Major rivers (like the Po in Italy) have historically low water levels. In particular, the low water level of the Po threatens the crops of many Italian farmers. The authorities have therefore decided to let the water from the lakes flow into the river at regular intervals, which has consequences for the water level of the lakes.

On dry days, the water level drops by up to two centimeters per day. The level is now more than a meter lower than normal.

However, saving crops should not come at the expense of particularly important tourism, explains Mayor Davide Bedinelli: “I have to protect both; tourism and agriculture”. According to Bedinelli, summer tourism is going according to plan, despite some cancellations from mainly German tourists, who avoid the Italian heat wave.

The main victims are now the tenants of deckchairs and deckchairs around the lake. The now bare rocks offer tourists enough space to sunbathe on a towel, instead of an expensive rental chair.