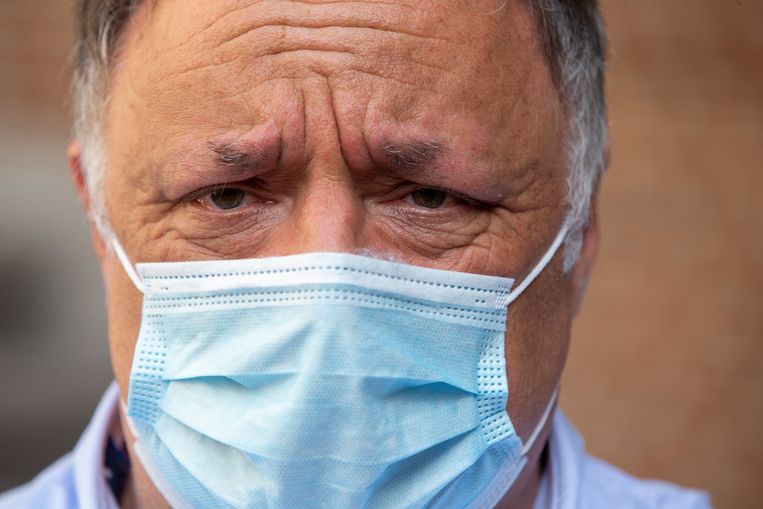 The porter shrugs his shoulders. Marc Van Ranst is half an hour late, but that’s not unusual. ” I have already seen it. I’ll send him a message. He never picks up when you call him, does he.

It’s a weekday afternoon in Leuven, at the Rega Medical Research Institute, the workplace of perhaps the busiest virologist in Belgium. Van Ranst has a date with the newspaper, then with the radio and later in the day also with the television. In the meantime, of course, he’s just working.

And in between, he gets involved, often via Twitter, in the public debate on racism and discrimination, issues that are close to his heart. In short, it is a day like so many others over the past two years.

Passport: Marc van Ranst
Born: June 20, 1965
Married: to Erna Smets. Milon’s father.
Profession: professor of virology
In 2021: he had to go into hiding for a month because he was threatened by Jürgen Conings (the missing soldier who was eventually found dead in the woods near Maaseik). He also fought on Twitter and in court with Willem Engel van Viruswaanzin.

Here he is, walking around, at ease, dressed as almost always in a V-neck sweater (brown, this time). With a little more wrinkles, a little more gray hair and a little more pounds than at the start of the pandemic, as he puts it himself. “Indeed, it’s been two years now,” he said, almost surprised. “It’s more like about four or five months. I’ll be happy when it’s all over. But I also know now that we are not done with it yet.

How many times has the virus surprised you?
“Oh, almost continuously! Viruses change and mutate. This is what they do. But luckily, we’re also seeing something new, something we’ve never done before. We have now made a vaccine for every inhabitant of the earth. About half have now been vaccinated. Warning: if you can produce nine billion vaccines and inject them into guns, this would be the biggest operation ever. ”

Are we sufficiently aware of this?
“No. People mainly complain about the number of injections coming up. You can see the harm, but certainly not the insane speed with which these things are finally sprayed into the arms by many volunteers. The expectations are too high.” You can handle such a pandemic “, he is then called. And if you cannot, then you are a stupid politician or an inept virologist. In fact, it is very simple: one can only try to transform a very big disaster into a little smaller disaster. That’s it. ”

Have you had thick skin?
“Yes, you cultivate it. But that’s not a credit. This is ultimately not the intention, of course. And you don’t get used to certain excesses, Marion Koopmans also knows that. (His Dutch colleague recently filed a report threats because of an email in which she was labeled, among other things, “Dirty Dirty Dachau Monster” and “Corrupt Slacker Who Line Pockets”.)

You spent a month in a safe house, after the armed far-right soldier Jürgen Conings knocked on your door.
“Yeah, but it wasn’t that exciting in itself. It was very safe in the refuge. But the ease with which people find it quite normal to be killed, and enjoy it, doesn’t make you happy.

You mean on social media?
“Yes. People think the internet is completely separate from who they are and what they write. If you look at the profiles of these people it suddenly turns out to be a grandfather. very sweet. I call them sometimes when it gets really too much. Just to know who has such a boring message coming from. They are always very surprised at first: how did you get my number ?! Well, just on the internet. After that can go both ways. Some get very angry and keep yelling, others I get apologies, because it was a joke and it wasn’t meant to be. Sometimes we even get a conversation that ends very politely and pleasantly.

“I want to argue with everyone, but I have no patience with people who are rude. I block it immediately and without hesitation. Then they immediately start complaining about free speech. This is hogwash. They can say all of these things, but I don’t want to hear it. It is absolutely my right. This is my square, and if you’re going to water it, this is the last time. ”

You will mainly receive criticism from the far right.
“I have been known here for some time as an opponent of the far right, racism and xenophobia. I’ve always been very open and vocal about it. Parties like Vlaams Belang or the Forum for Democracy do not enjoy my sympathy. If these say inappropriate things, then there is a chance, when I read it, that I will respond to them. These people can’t have that at all; neither in Belgium, nor in the Netherlands. They think I’m dangerous, because I’m in the media a lot, I get attention every day. So they are pushing some of their supporters in a dangerous direction. I have been compared to a pedophile and to Stalin before. Be careful, he’s a mass murderer. All you need is a fool who thinks: I’m going to be of service to mankind. It is indeed not entirely inconceivable, no.

Do we need to talk about Willem Engel from Virus Madness? You recently won a lawsuit he brought against you. He was angry with you for allegedly portraying him as a virus denier.
“No, it is absolutely not compulsory. The intention is to reduce it to a miscellaneous. Although I would prefer to have his job. Not really! Teaching Salsa is the most amazing job you can have. No worries, great music. It would suit me perfectly. Unfortunately, I am a rake. My sense of rhythm sucks.

However, sometimes you get into discussions with antivaccines.
“Definitely. Not on my own initiative, but if a Wappie organization asks me to come and speak, I do. At the start it’s always very busy, but later there is always respect. At least you do. You dared to argue with them. You’re never going to convince anyone, are you? You shouldn’t have that expectation. It’s a religion.

You have a 12 year old son, Milo. Can you explain to him what motivates you?
” He knows it. And he should also see this example. It’s okay if your son or daughter sees that you are passionate about something, and dare to open your mouth if it’s for a good cause. ”

Do you still have privacy?
“No, not really. I’ve had time lately for… well, nothing. Just the pandemic. Not for recreation, not for other fun things. A monomaniac existence. I’m going to relax, really. . But not much. I’ll hold on because I know it’s over. In 2009, during the swine flu, I was just as visible and just as busy as an influenza commissioner. But in 2010, it was. This horizon is particularly attractive.

What is your prognosis for this pandemic? Does it look like something?
“If you want a scientific prognosis, you have to compare this pandemic with the only one to which it is comparable: the Russian flu of 1890. A bovine coronavirus has been transmitted to humans. About a million people died during this time, out of a world population of one and a half billion. In terms of impact, it’s comparable to now. The clinical picture was exactly the same, including loss of taste and smell. Here in Leuven, we developed the theory that the current human coronavirus OC43, a virus that occurs every winter in the form of a severe cold, is an offshoot of this Russian flu. However, OC43 was discovered in 1970. This means that it went from a pandemic virus to a cold virus in about eighty years.

“We don’t know when this change took place. This may have happened in 1969, although it is unlikely. This could also have happened in 1891, which is also unlikely. So somewhere in between. The best prognosis I can give is between one and eighty years old. But that doesn’t help many people. Maybe omikron is a step in the direction of weakening the virus, maybe there will be a more dangerous variant after omikron. We do not know it. You have no control over that either. You have to live with a lot of uncertainties and still try to implement a policy. Based on 10 or 20% of the information, knowing that two months later everyone is criticizing you with 100% of the information. It’s easy, they are the experts of the retrospective.

So you are still working. Do you have some free time soon?
“Yes, we are going to the Efteling for a weekend. We love to go there. No one needs to call from the newspaper, radio or television.