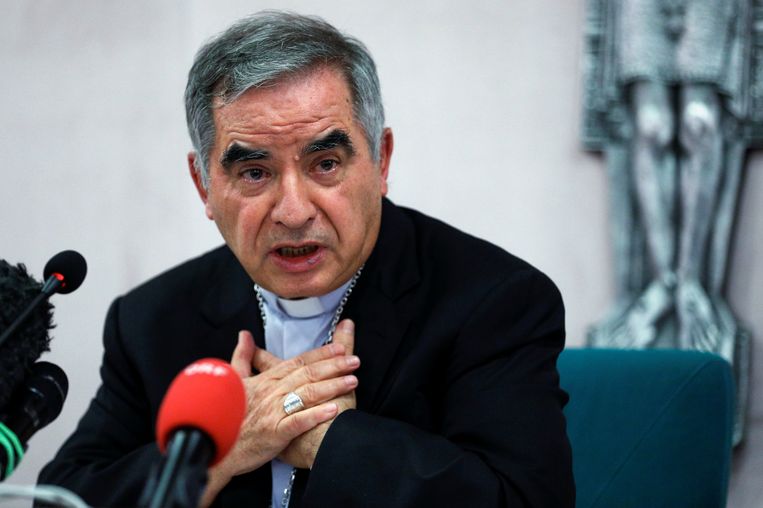 Becciu (73) was instrumental in a Vatican mega-investment in luxury apartments in London, for which the Catholic Church has spent a total of 350 million euros, according to the AP news agency. A full-scale investigation into the use of the money – mostly donated by believers – found the Vatican had lost millions to middlemen, incurred unexplained expenses, and paid far too high prices.

Becciu is the highest ranking clergyman ever prosecuted for embezzlement and abuse of power. The sacked cardinal, who was allowed to retain his title, was one of the most important people in the Vatican administration between 2011 and 2018. He was powerful within the church and was even seen as a potential successor. of Francis until his resignation last fall at the request of the Pope.

In his resignation, which is rare among cardinals, the Pope cited not the real estate scandal as the reason, but a donation of 100,000 euros that Becciu allegedly made on behalf of the Vatican to a charity run by his own brother.

Besides Becciu, his “security consultant” Cecilia Marogna is also being sued, to whom the cardinal has paid more than half a million euros. She is said to be working to free priests and nuns held hostage around the world, but prosecutors say her main activity was shopping for luxury items. Marogna denies all the accusations and says she can fully justify her expenses.

Among the eleven suspects are also two Italian real estate agents, Raffaele Mincione and Gianluigi Torzi, friends of Becciu. They are suspected of fraud, professional misconduct and in Torzi’s case also extortion. He would have imagined a legal construct whereby he himself had the rights to the property after the purchase, which he only wanted to hand over to the Vatican if he paid it 15 million euros. According to Torzi, the accusation is based on a misunderstanding.

Vatican prosecutors admit in their investigation that Pope Francis was aware of the agreements, which were approved at the highest level. He even met Torzi in 2018 and, according to a witness, allegedly offered to achieve “appropriate compensation” for the broker. Other senior Vatican officials were also aware of the deal, but none of them are facing prosecution for allegedly being misled by Becciu.

The cardinal himself denies all the allegations and said in a statement to the AFP news agency on Saturday that he considered himself “the victim of a conspiracy theory”. He insists that he is “absolutely innocent”. The trial of Becciu and the ten others will begin on July 27.