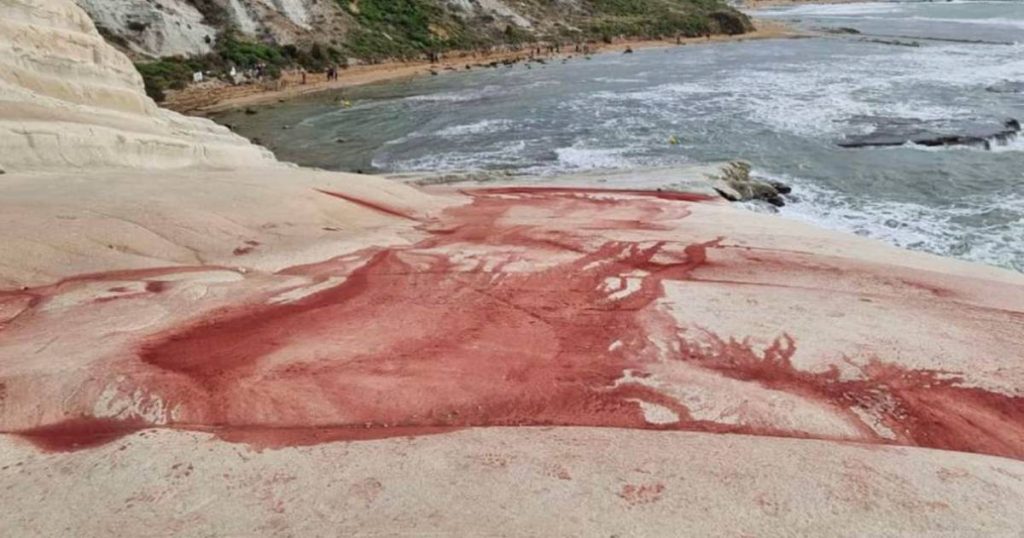 On the Italian island of Sicily, vandals disfigured the famous Scala dei Turchi cliff with red powder. The cliff, also known as “the Turkish Steps”, is one of the most famous tourist attractions in the region. Anonymous vandals reportedly coated the cliff with iron oxide powder, which is red in color last Friday. Many locals gathered the next day to clean up the cliff.

Nello Musumeci, the President of Sicily, has said he strongly disapproves of the crime. He called it “an attack on a place of rare beauty and against the image of the island”. Police have opened an investigation into the vandalism. For example, authorities will analyze recent powder purchases and surveillance footage to identify perpetrators.

The vandals smeared the cliff on the night of January 7-8. The next morning, several local residents gathered to clean the rocks again using pressure washers. Fortunately, the powder was quite easy to remove and some of it had already been washed away by the sea water.

In 2019, the Scala dei Turchi cliff was a candidate to become a UNESCO World Heritage Site. However, the tourist attraction was temporarily closed in 2020 after complaints about the lack of maintenance of the rocks. For example, the cliff not only suffers from natural erosion, but the large number of tourists also causes more degradation every year. Some of them take pieces of rock from the cliff with them as souvenirs.

There was also a legal dispute for years over who exactly was the lawful owner of the land. Sicilian Ferdinando Sciabbarà, 73, claimed the cliff was his property (not that of regional authorities). It was based on official documents from the 19th century. The case was ultimately settled in his favor.