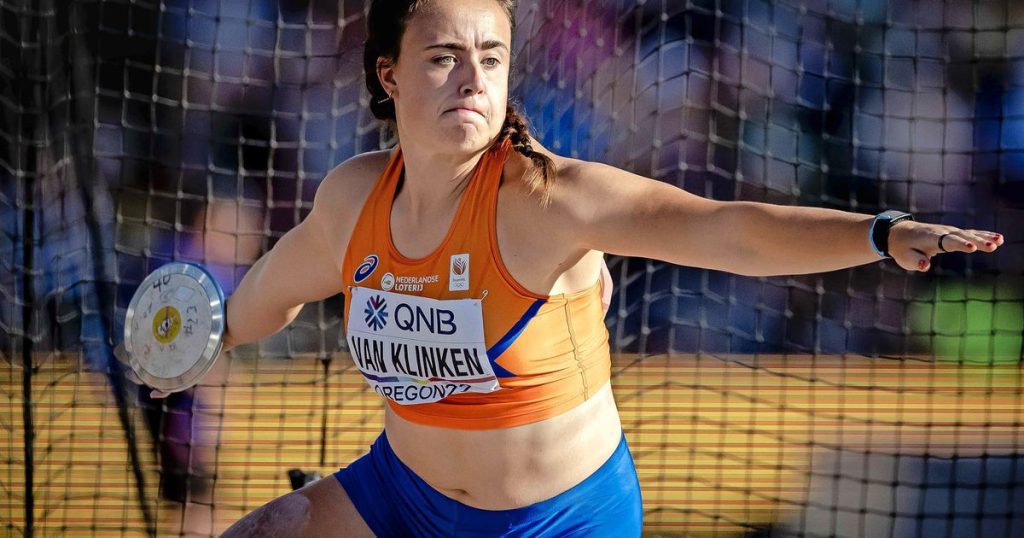 Van Klinken made a name for himself in the United States in discus throwing as a student at the University of Arizona. She has won the prestigious US Student Championships for the past two years. Last year, the née Assense held first place in the world rankings for a long time with a throw of 70.22 meters. She was the fourth woman this century to cross the 70 meter mark.

With her throw of 65.66 meters, she finished second in qualifying. Only the American Olympic champion Valarie Allman went further: 68.36 meters. Van Klinken dared to say out loud that she was aiming for a medal in the final. “Why not? I think I’m one of the medal contenders, so that’s a big goal,” she said.

Conditions at Hayward Field were favorable for discus throwing, Van Klinken said. “There was a headwind and it’s perfect. To be honest, I expected to cast a lot further, but it was disappointing. This second place for me is somewhat surprising, also because I suffered an upper leg injury two weeks ago, just when I felt really good form was coming.”

For this reason too, Van Klinken was delighted with this 65.66. “The injury has not affected the form. It is a relief.”

High jumper Mutaz Barshim of Qatar won the world title for the third time in a row. He won the gold medal in Eugene with a jump of 2.37 meters. He made another attempt at 2.42, but failed.

“Three consecutive world titles in the high jump have never been won by anyone,” Barshim said. “I’ve got a big name in the sport now, but I’m not feeling my best. I still don’t have the world record,” said the athlete, who shared Olympic gold in Tokyo last year with Italian Gianmarco Tamberi.

The world record has been held since 1993 by Cuban Javier Sotomayor with 2.45 meters. Barshim’s highest jump is 2.43 meters.

Venezuelan Yulimar Rojas won the triple jump world title for the third time in a row. His best jump was 15.47 meters. She is also an Olympic champion and world record holder with 15.67.

Kenya’s Faith Kipyegon won the 1500m world title ahead of Sifan Hassan. The Dutch athlete jumped this distance in Eugene. She ran the 10,000 meters and still competes in the 5,000 meters. Kipyegon, who won the Olympic 1500 meters title in Tokyo last year, won the final in Eugene with a time of 3.52.96.