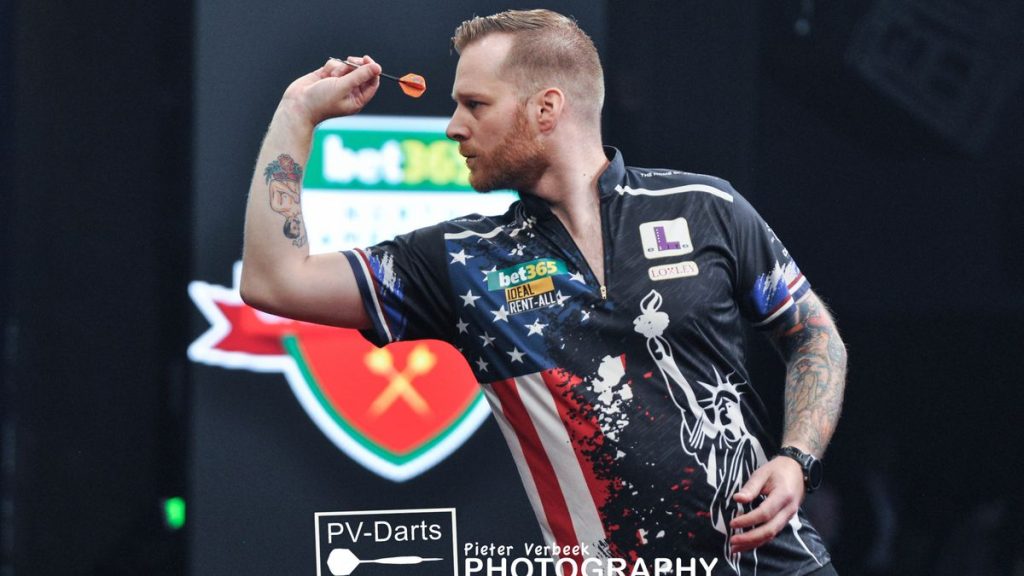 Jules van Dongen was knocked out in the first round of the US Darts Masters at Madison Square Garden. Still, the Dutch American enjoyed the experience.

Van Dongen lost 6-4 to Michael van Gerwen. “It’s always nice for Americans when an American is on stage, especially against a world-class player. And I’ve embraced that atmosphere myself. That Michael didn’t see it coming surprised me. Even the fans with a Van Gerwen jersey were cheering me on,” says The Dutch Dragon in front of AD.nI.

Van Gerwen said afterwards that it was the match of his life for Van Dongen, but Van Dongen disagreed. “No, not really. I was on the podium at the UK Open, I participated in the Euro Tour in Prague and I qualified for the WDF World Championship in Lakeside. It’s a lot more special. It was certainly cool, but it was just an exhibition game.

With these World Series in New York, the PDC hopes to increase the popularity of darts in the United States. Van Dongen is skeptical, however. “In the United States, soft tip darts are still pretty popular, but that’s about it. On TV they show air guitar competitions 24 hours a day and throw that game with those bags in a hole , but darts don’t step in. Last year there was a tournament in New York with the top 16 North American darts players, but there were maybe just under fifty people in the audience.

Sports betting is banned in many US states and finding sponsors is often quite a task. Van Dongen is therefore struggling to make ends meet financially. “Hotels, flights and everything around it takes a lot of energy and money. And if you lose somewhere in England or Germany in the first round, you start to wonder why you’re actually doing it. That becomes very negative. I almost always have to fly to tournaments in North America. In Kansas City (where Van Dongen lives) there are 2.5 million people, but if I gather 16 players from darts is a lot. It helps me to have a positive attitude as a person.”

Van Dongen has lived in the United States since 2013 and does not yet have a US passport, but is from there. “I live here and I learned to play darts here. My whole darts career is American and in this way I can also help to advance darts in this country. I will not name names, but I receive comments and remarks from other darts they do It’s an easy job Finding a way to qualify for tournaments like World Cup of Darts But it really bothers me they are not my friends.