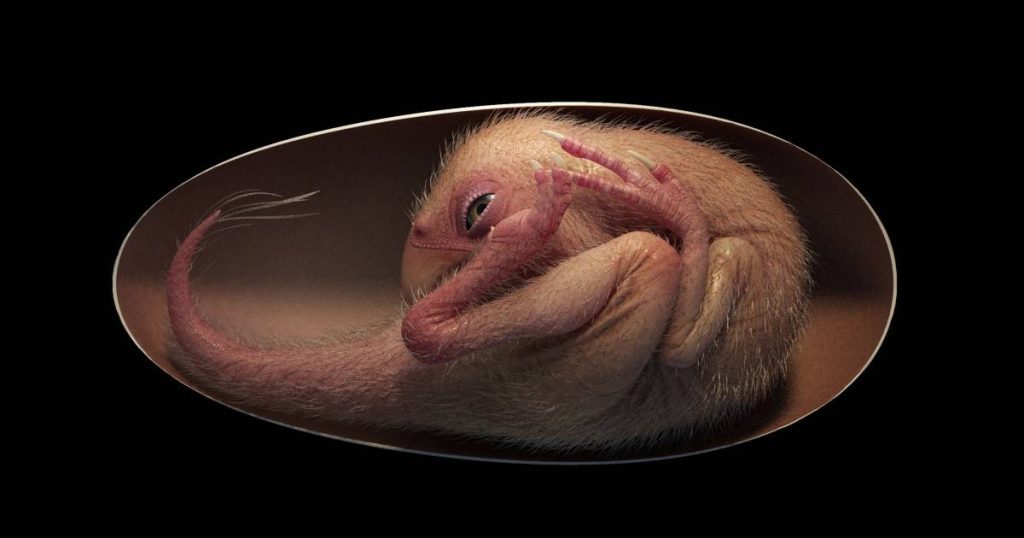 Never before has such a detailed fossil of a baby dinosaur curled up in an egg been found. For scientists, Baby Yingliang, the name they gave the dinosaur, is further confirmation of the relationship between dinosaurs and birds.

Scientists from the UK, Canada and China have found the 70-million-year-old fossil in records in China. It turned out that he had already been excavated in 2000 in Jiangxi Province, but now Baby Yingliang had been largely forgotten and had been collecting dust for twenty years in the warehouse of Yingliang Group, a Chinese stone company. The fossil resurfaced during the construction of the Yingliang Stone and the Natural History Museum.

In the fossil, you can see the bones of an embryo of Oviraptor, a type of dinosaur that roamed the land near Mongolia 75 million years ago in the Cretaceous Period. The species is also referred to as “the egg thief” because the dinosaur was found on an egg nest when it was discovered. Scientists later found out that this was unfounded: it was probably his own eggs.

The fossil is very special, says Darla Zelenitsky of the University of Calgary in Canada. Baby dinosaur bones are very fragile, so an intact embryo in an egg is very rare. “It’s a fantastic specimen… I’ve been working with dinosaur eggs for 25 years and I’ve never seen anything like it,” Zelenitsky told CNN. “Until now, little was known about what happened inside a dinosaur egg before it hatched. There are so few embryo skeletons, especially if you want them to be complete and also in a “living” position.

After examining the 17-centimeter egg, the scientists concluded that the Oviraptor moves in the same way in the egg during the incubation process as birds. In a process that ‘fold backThe embryos curl up in a way that makes it easier for baby dinosaurs to hatch from the egg, just like chicks.

This once again confirms the theories surrounding the connection between dinosaurs and birds, Zelenitsky explains. Specifically Theropoda, a group of dinosaurs that walked on two legs, a link to bird behavior is increasingly being found. From hatching eggs to feathers, these dinosaurs, although much larger, likely resembled modern day birds. And this is again confirmed by the Baby Yingliang fossil, Zelenitsky said. The T-Rex, known from the Jurassic Park movies, was also part of the Theropodas.