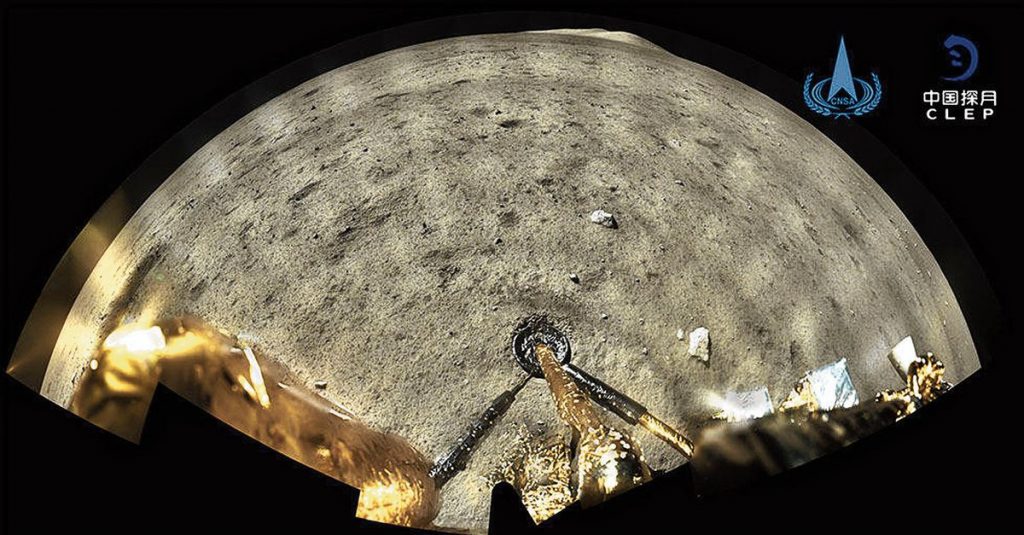 Two billion years ago, volcanoes were still active on the Moon. This is much shorter than the previous measurements suggested. A group of international researchers came to this conclusion thanks to two new moon rocks that China’s Chang’e 5 unmanned lunar mission at the end of last year. brought back to earth. Researchers published the results this week Science.

The Moon is approximately 385,000 kilometers from Earth. It is much smaller (3,474 km in diameter) than Earth, but it is the fifth largest of the more than two hundred moons in the solar system.

The moon has had active volcanoes. The surface is strewn with cooled lava, and some of the rocks that previous lunar missions have brought to Earth contain basalt. This type of rock is formed by volcanism. The eruptions likely resembled so-called hotspot volcanoes, like those in Hawaii. A piece of the earth’s crust is melting from below due to a constant local flow of hot, partially molten rock. Due to the increasing pressure under a thinned crust, magma eventually bursts through the crust.

While satellite images of the moon suggest there may have been more recent volcanic eruptions in some places, evidence has only been found from active volcanoes that are at least three billion years old. Among the 380 kilograms of rock brought to Earth by the Apollo missions until 1972, and later among rocks from other missions and lunar meteorites, there was not a single volcanic rock less than three billion years.

But between the new moon samples, there were now two rocks from younger volcanoes. The stones were picked up by the Chinese robot lander Chang’e 5. It landed late last year in Oceanus Procellarum, a large lava plain on the moon. A carefully chosen location. The surface appears there younger than the rest of the moon. After shoveling and drilling, Chang’e 5 lifted a capsule filled with rocks to a mothership orbiting the moon. The mothership sent the rocks to Earth in orbit around the moon for laboratory research. Analysis of different lead variants in individual basalt crumbs revealed that the volcanic rock is two billion years old.

“Finds it exciting,” says Wim van Westrenen, moon researcher at VU University Amsterdam and not involved in the study. “Two billion years ago, according to the models, the mantle had cooled too much for volcanism. However, it is possible that heat-producing elements in the mantle locally warmed the magma. These elements give off heat by radioactive decay. “A lot of these pieces behave together like a kind of big local radiator, which could still create a hot spot two billion dollars ago. Only, strangely enough, these heat-producing elements were not found in the new samples at all. “

Does this mean that a still unknown process will soon cause another volcanic eruption on the Moon? “It is very, very unlikely. The moon cools much faster than the earth. The moon is much smaller and barely has an atmosphere. And there is no water, which makes it easier to melt. stone I think the volcanic eruptions of two billion years ago were really the last.

According to Bart Root, a planetary researcher at Delft University of Technology and also not involved in the study, the most interesting thing about the discovery is that these planetary researchers are helping to calculate the age of other geology. celestial bodies. “To do this, we use a model based on the moon. He’s taking rock samples in the laboratory on Earth, and so far we’ve only had them from the Moon. We apply this model to other celestial bodies, such as Mars, Mercury, and Ganymede.

A version of this article also appeared in NRC on the morning of October 8, 2021