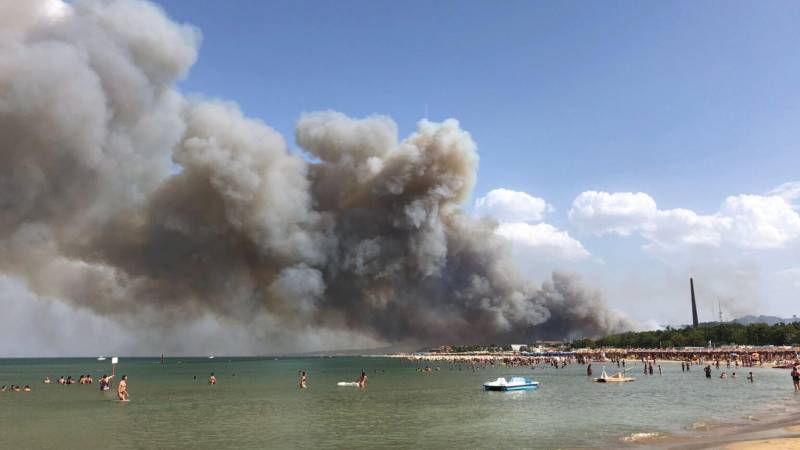 At least five people were injured and tourists evacuated by forest fires in the Italian town of Pescara. This is what the Italian media report. Three injured people reportedly tried to put out the fire that had reached their home.

The fire started in a 53 hectare central park and quickly spread further. More than 800 people were evacuated, including nuns from a convent and residents of a retirement home. A school burned down and several cars caught fire. According to Italian media, the bathers were evacuated and some beach visitors fled.

“We had to evacuate several houses and seaside resorts because of the smoke,” Mayor Masci de Pescara told Italian news agency Ansa. “We are doing what we can to limit the damage.”

The Abruzzo region, in which Pescara is located, has requested help from the government of Rome. The fires have also interrupted traffic in some areas. Ansa reports that trains on the railroad tracks along the Adriatic coast suffered delays of up to more than 6.5 hours yesterday. Long traffic jams also occurred due to the closure of toll gates.

In Italy, firefighters called more than 800 times last weekend, especially in the south of the country. Italian firefighters mainly report numerous fires in Sicily (250) and in Puglia and Calabria (130). Dozens of requests for assistance with the deployment of firefighting planes came from across the country. Hundreds of firefighters were deployed to fight the blaze.

There are also major problems due to forest fires in other parts of southern Europe. Including in Turkey, where forest fires have gripped much of the Turkish Riviera. So far, eight people have been killed in Turkey. Hotel guests and employees had to be evacuated by boat near Bodrum town.

In Greece, parts of the island of Rhodes are without electricity, according to the Greek broadcaster ERT. Forest fires damaged the electricity grid. Authorities have called on residents of several villages to leave amid fears the fires could spread.

The government is warning of power cuts and urged people not to use too much power. It could be 44 or 45 degrees in parts of Greece in the coming days. People are urged not to set the air conditioning below 26 degrees.