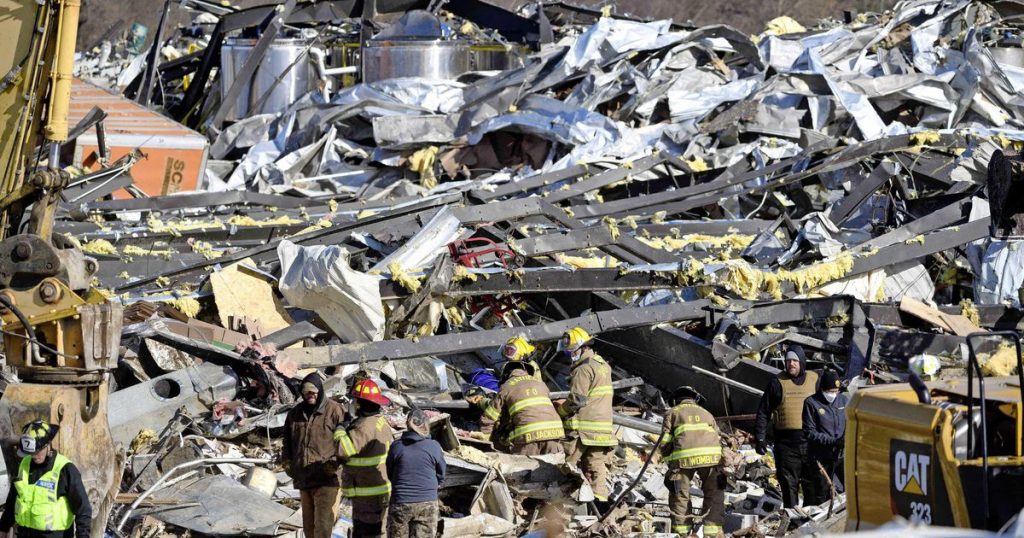 President Biden on Wednesday announced his intention to visit the Kentucky disaster area. He had previously paved the way for additional funds from Washington to help the hard-hit state.

The natural disaster almost wiped out places in Kentucky like Mayfield. But other states have also reported significant deaths and damage from the unprecedented series of around 30 tornadoes labeled “historic.” At least six people have died in a collapsed Amazon warehouse in Illinois. The authorities have opened an investigation into the circumstances.

The Kentucky dead ranged from five months to 86 years old. The governor expects more casualties. Shortly after the disaster, he expressed fear that more than a hundred of them had been killed. The exact extent of the disaster will only become clear in the coming weeks, he expects.

In Mayfield, among other places, a candle factory was destroyed. At least eight people have died here. At least 94 of the 110 employees managed to get to safety, management suspects.

A boat is sucked out of a showroom by a tornado, in Mayfield, Ky.

The situation in Bowling Green Kentucky.

Aerial view of the situation in Mayfield, Kentucky.

In the Amazon warehouse.

A woman walks past what remains of the candle factory.

Local media report that dozens of people have been killed in Mayfield after a candle factory collapsed. Of the 110 employees, 70 have not yet been found. It will be a “miracle” according to Beshear if anyone is found alive there. Reports of some deaths come from other states. Three known deaths in Tennessee, two in Arkansas, one in Missouri.

At least six employees were killed at an Amazon warehouse in Edwardsville, Illinois. An unknown number of people were buried under the rubble after a tornado ripped off the roof of the building and part of the building collapsed. It is not known how many people are still trapped in the warehouse. We fear for the lives of dozens of people here.

Amazon CEO Andy Jassy said on Twitter he was “deeply saddened” by the deaths of his employees. “Our hearts go out to their families at this difficult time. Founder Jeff Bezos also expressed his condolences on Twitter. The second richest man in the world said Amazon will work to support the community. Bezos also expresses his thanks to the emergency services on site.

In the states of Tennessee and Kentucky alone, at least 200,000 homes are without electricity.