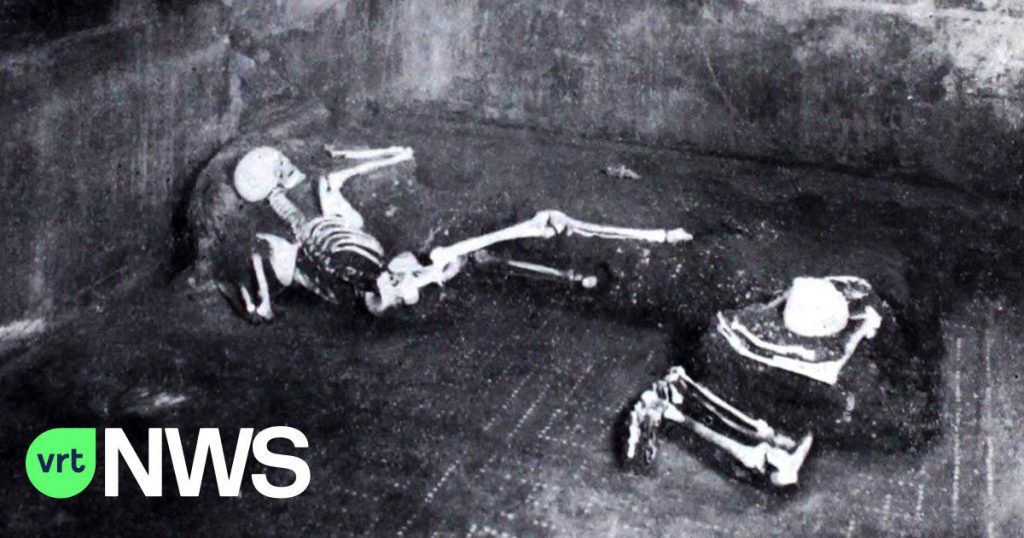 A gigantic volcanic eruption, and yet not receding. It was the bizarre discovery that archaeologists made in the ruins of Pompeii in 1933. In AD 79, Vesuvius erupted, wiping Pompeii completely off the map – or rather, spreading a blanket of lava and ash over the city. Roman, which had about 20,000 inhabitants. The site has become an archaeological treasure, because the vestiges of men, human activities and animals have been particularly well preserved there for two thousand years. Entire murals, streets and shops have already been found and the buried city has become a UNESCO World Heritage Site.

A well-preserved street in Pompeii.

Too sick to run

In 1933, archaeologists encountered something strange there: two people buried but who did not seem to run away. They were lying in the dining room, leaning over a “triclinium”, a sort of lounge chair from which people often ate at the time (see photo below). The researchers concluded from their posture that, contrary to what one might suspect, they were not running towards a disaster that suddenly occurred in broad daylight.

Now scientists may know why the duo are here: In a whole genome scan of the genetic material of the 35-40 year old man, researchers found traces of a bacterium that causes tuberculosis. A thorough examination of a vertebra showed that it was vertebral tuberculosis: a serious form of tuberculosis also called “Pott’s disease” which affects the vertebrae, as shown in the photo. He was probably too weak to run away.

Photo and digital x-ray of the vertebrae of a man with spinal tuberculosis.
Scorrano, G., Viva, S., Pinotti, T. et al.. Bioarchaeological and paleogenomic portrait of two Pompeians who died during the eruption of Vesuvius in 79 AD. Sci Rep 12, 6468 (2022).

Except in matters of health, they probably weren’t suckers, or at least not the man. Both were found in the “Casa del Fabbro”, or blacksmith’s house, although researchers now suspect it was once a furniture maker. A successful furniture maker, you can imagine: the house showed a lot of luxury for the time and was spacious enough for about thirteen people. Perhaps other occupations were also exercised in the house.

A sick man and woman who have been attacked by a disaster, it appeals to the imagination. But this discovery is above all of great scientific value: it is the first time that a complete genome of human remains from Pompeii has been “sequenced”, that is to say that the DNA has been completely deciphered, from of bones excavated some 90 years ago. . The powder was made from a piece of the man’s skull, from which the DNA was then “read” by a machine.

Pompeii is like a picture from 79 AD. Now we have opened a new opportunity to study it.

With this data, researchers can now get to work mapping the genetic information of humans. They compared his DNA with that of a thousand others from the same period and with the DNA of some 400 modern Eurasians. They found similarities with others of the time in that region, as well as with people from Sardinia.

This is not so surprising, because the Romans then traveled a lot and the Empire spread widely. At that time, the city of Rome alone had a million inhabitants. This is according to Professor Gabriele Scorrano of the University of Copenhagen, principal researcher of the new study, on British broadcaster BBC Radio 4’s “Inside Science” radio show. And this led to high genetic variability in the population at the time. It’s hard to draw big conclusions.

Why is this discovery so important? “Pompeii is like a photo of 79 AD, of the people of that time. It’s unique in the world,” Scorrano points out. Genetic material can now be added to this photo. “We’ve opened up a new opportunity for people to research this population.”

Working for the victims of a natural disaster is an emotion that is difficult to describe.

And researcher Serena Viva, an anthropologist at the University of Salento (Italy), is also impressed. “Working with the victims of a natural disaster is an emotion difficult to describe. These people are the silent witnesses of one of the most famous historical events in the world.” And that’s no exaggeration: Vesuvius’ eruption was the deadliest ever seen in Europe, killing 2,000 people from its immediate impact.