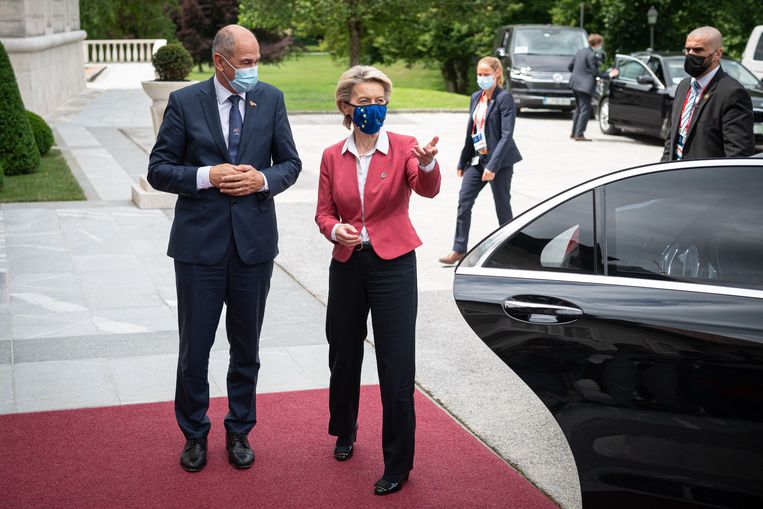 Slovenian Prime Minister Janez Jansa says it without the slightest irony. He had “not at all noticed” that European Commissioner Frans Timmermans had refused to take a picture of himself with him in protest. – I only heard that today. There are also so many people on stage for the family photo. ‘

Unfazed, Jansa takes a press interview with European journalists on Friday morning to sharpen the quarrel with the European Commission. He accuses Timmermans of childish behavior. An hour earlier his Home Secretary Ales Hojs had suggested he would like to call Timmermans a “pig”, which he will come back to later. The start of the Slovenian EU Presidency this week could have been more harmonious.

The fire was lit Thursday afternoon at a festive all-Commission lunch with the Slovenian government in Brdo (near Ljubljana), kicking off the Slovenian EU Presidency . During this lunch, Jansa says he doesn’t want judges with a party color he doesn’t like. Commission President von der Leyen is unhappy, Timmermans downright annoyed. He refuses the traditional family photo with Jansa.

On Friday morning Jansa not only said he missed Timmerman’s absence, he said the Dutch EU commissioner should have acted more mature. “If you have a problem with Slovenia, pick up the phone or send a letter.” Continue: “If Timmermans feels assaulted, well: we haven’t started this case. If he can’t stand the truth, that’s his problem.

The Prime Minister says he is in favor of a “vigorous debate”, but he does not want his country to be lectured by Brussels as “a second-class EU member, as an EU colony”. He has already experienced this: when Slovenia was part of Yugoslavia and there was nothing to say.

Judges dismissed from their posts

According to Jansa, the Commission behaves like a club of haughty and unilaterally informed bureaucrats. “Here in Slovenia, judges campaign politically on Sunday, and on Monday they hand down their sentences again. The judiciary is not independent. The fact that he wants to remove judges from their positions is to strengthen the rule of law.

He also has candid ideas about media freedom. Responding to criticism that he is financially pinching the Slovenian news agency STA, he shows a 16-minute video on Slovenian media. This is a series of “examples” of how previous “left” governments have gagged the media. With harsh attacks also against journalists who are now spokespersons or politicians of a party he does not like. Jansa denies the fact that he himself was a journalist: it was another time.

The biggest danger for the EU is the use of “double standards” for member states, Jansa says. His country, but also that of his friend Viktor Orbán, the Hungarian Prime Minister, is held responsible for matters which allow other EU countries to free themselves. Fearing the Hungarian and Slovenian rule of law, media freedom and recently the possibility for young people to be able to learn about a sexual orientation different from that of heterosexual men and women, according to Jansa, this could cost the head to the EU. EU countries are different, treat them equally and respectfully, Jansa says. “Otherwise, the EU will choose the highway to collapse.”

After the video on “the real lack of media freedom” in her country, Jansa admits that the images will not convince the Commission. ‘I don’t have that illusion either. But remain critical of my country.

Sigrid Kaag sets the bar high, but doesn’t always exceed it herself. To what extent are the harsh criticisms of the leader of D66 justified? Listen to our political podcast with columnist Sheila Sitalsing, editor-in-chief Pieter Klok, political leader Raoul du Pré, political journalist Natalie Righton and presenter Gijs Groenteman.