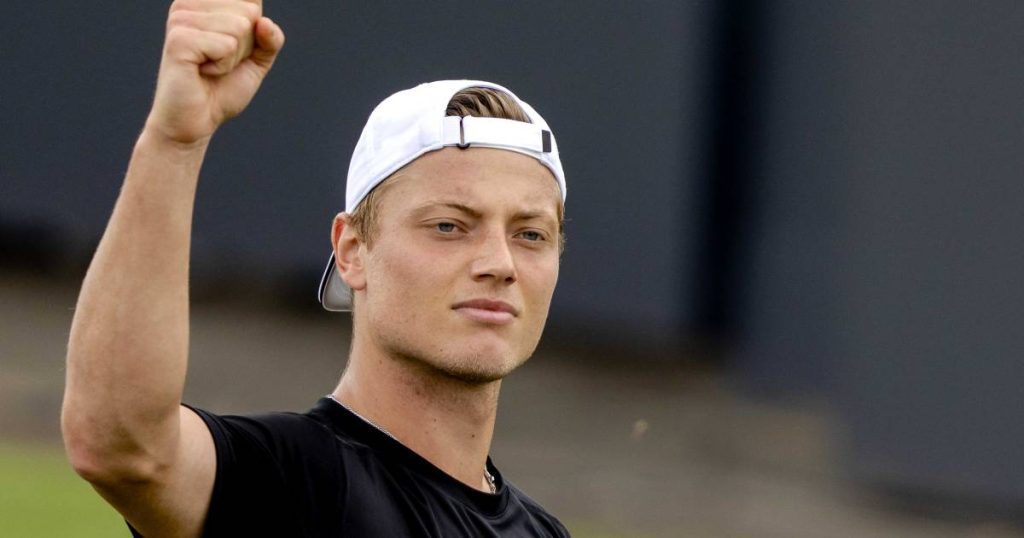 with videoTim van Rijthoven secured a place in the semi-finals of the lawn tennis tournament in Rosmalen. World number 205 was too strong for Frenchman Hugo Gaston with 7-6 (2) 6-4.

Van Rijthoven, 25, thus gave his surprise victory over American Taylor Fritz on Thursday a fitting follow-up. The number 4 of the Netherlands had never won a match at the highest level before this edition of the Brabant tournament.

Van Rijthoven finished on his first match point with a forehand down the line. The very serving Dutchman won no less than 38 of the 40 points played on his first serve. He didn’t give up a service game and hit twelve aces. A break, midway through the second set, was enough for him to win the match after convincingly winning the first set tie-break.

The only remaining Dutchman’s singles match was played on Court 1, as on Friday the men’s and women’s combined tournament Daniil Medvedev and Felix Auger-Aliassime – numbers 1 and 2 in the men’s tournament – will play on center court.

On Saturday, Van Rijthoven will face Félix Auger-Aliassime in the last four. The second-placed Canadian in the last eight defeated Karen Chatsjanov of Russia 7-6(5) 6-4. Auger-Aliassime, the world number 9, overturned a 5-3 deficit in the first set. He then won the tie-break with difficulty and only one break in the second set was enough for the victory.

Auger-Aliassime (21), winner of the ABN AMRO World Tennis Tournament in Rotterdam earlier this year, can become the first tennis player since 1997 to win the title in both Ahoy and Rosmalen. 25 years ago, Richard Krajicek succeeded.

Van Rijthoven, the surprise of the tournament, can prevent this special performance. ,,We have known each other since we were young. He’s a tough opponent, a boy with solid groundstrokes and a good forehand. I hope to be there on Sunday,” said the Canadian about the number 4 in the Netherlands.

Medvedev with a lot of effort for the semi-finals

Daniil Medvedev reached the last four of the Rosmalen grass tournament with some effort. The world number two managed to avoid a blow from Belarusian Ilya Ivashka with 7-6 (8), 6-4.

In the first set, in which both lost their service game twice, Medvedev used his third set point at 9-8 on the tiebreak. In the second set, he beat world number 48 at 5-4 on love. On the first game ball, Ivashka hit a backhand.

Medvedev is hoping to win his first title since last year’s US Open in Rosmalen. The Russian was a runner-up at the Australian Open earlier this year and has had a less clay-court season due to minor back surgery.

On Saturday, Medvedev will face Frenchman Adrian Mannarino in the semi-finals, winner of the last edition in 2019. The defending champion, world number 70, fought his way past American Brandon Nakashima in three sets.

Demi Schuurs dropped out in the women’s doubles semi-final of the Rosmalen Lawn Tennis Tournament. The world number 15 in doubles has injured his back.

Schuurs, 28, and her partner Desirae Krawczyk of the United States trailed 4-1 against Slovenia’s Tamara Zidansek and Australia’s Ellen Perez.

Schuurs won the doubles tournament in Rosmalen in 2018, along with Belgian Elise Mertens.

Olympic tennis champion Belinda Bencic was eliminated in the quarter-finals of the grass court tournament in Rosmalen. The No. 2 seed on the list lost 6-4 6-2 to Veronika Koedermetova of Russia.

The sixth seed Koedermetova (25), who competes under a neutral flag at the Autotron, never gave up her service game against Bencic. The world number 24 claimed victory after an hour and 27 minutes. Bencic, world number 17, won gold at the Tokyo Olympics last year. The Swiss reached the final in Rosmalen in 2015. She then lost to Italy’s Camila Giorgi.

The Russian loses on Valencia clay

For tennis star Arantxa Rus, the Valencia clay court singles tournament is over. The 31-year-old Dutchwoman lost in the quarter-finals of the WTA 125 tournament against Sweden’s Mirjam Björklund: 6-3, 6-7 (4), 2-6.

Björklund (23) is world number 134, the Russian is in 77th place. The Westland player preferred the tournament in Spain on her favorite clay to this week’s grass tournament in Rosmalen. ,,Because there are no points to be won at Wimbledon, I prefer to continue my season on clay for a bit longer,” Rus said last month after his first-round elimination from Roland Garros. reached the quarter-finals in Valencia without dropping a set, but after winning the first set things turned sour against Björklund.

Rus reached the doubles final. Along with Alexandra Panova of Russia, she defeated Anastasia Detiuc and Miriam Kolodziejova of the Czech Republic in the semi-finals: 6-4, 5-7, 10-8.