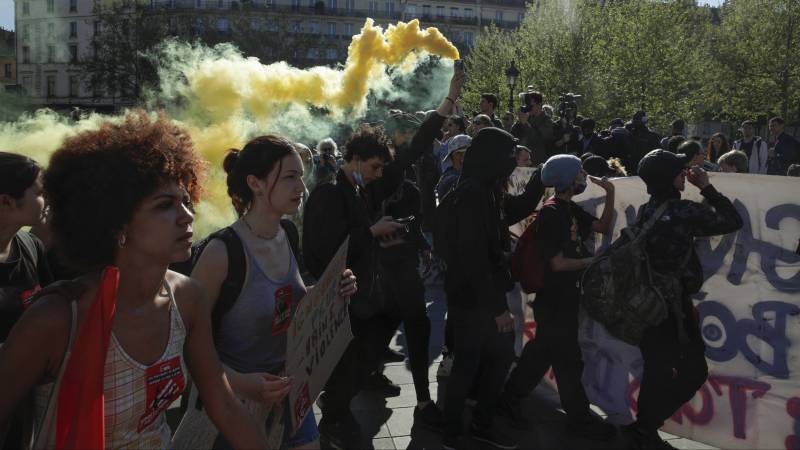 Several thousand people demonstrated in France against the extreme right. The organization of protests had called for demonstrations in more than thirty cities to prevent the coming to power of the right-wing populist candidate Marine Le Pen. The second round of the presidential election will take place next Sunday.

Tear gas was briefly used at the protest in Paris as the protest seemed to spin out of control for a time, but protests around the country were ultimately largely peaceful. According to the organizers, 150,000 people were on the road throughout the territory and 40,000 in Paris. But authorities say there were far fewer participants: 9,200 in the capital and less than 25,000 nationwide.

In the first round of the presidential election, Le Pen obtained more than 23% of the votes. Current President Macron received more than 27%.

“Against right-wing extremism. For justice and equality. Le Pen not at the Élysée,” read a banner of activists in Paris. Students, feminists, trade unionists, environmentalists and anti-fascists, among others, have expressed fears that Le Pen might win the election.

“If the far right comes to power, it will be a blow to democratic, anti-racist and progressive currents,” the president of SOS Racisme told Reuters. He hopes those supporters of these movements disappointed with Macron will see it when they go to the polls later.

Le Pen was campaigning today in Saint-Rémy-sur-Avre. There, she dismissed the protests as undemocratic. “The establishment is worried,” she told a Reuters reporter. “For people to demonstrate against the election results is very undemocratic. I say to these people: go vote.

His opponent Macron held a large campaign rally in Marseille today. There, the president praised his environmental policy and his future plans in this area, with the aim of reaching as many young voters as possible.

Next week, the two presidential candidates will debate among themselves on Wednesday evening.