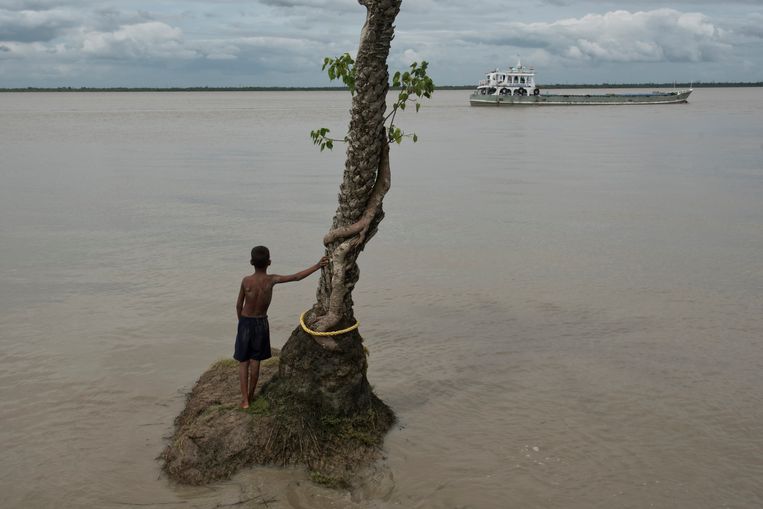 They made a model of sea level rise taking into account for the first time oceanic eddies: a kind of eddies with a diameter of tens of kilometers that keep the warming of sea water at a distance from the sea. ‘Antarctic.

Their model differs from previous models on an important point. It works with much higher resolution. In other words: in this model, the ocean is not divided into sections of 100 by 100 kilometers, but of 10 by 10 kilometers. As a result, the effect of ocean eddies can suddenly be included. This fine mesh requires enormous computing power: the Dutch supercomputer spent more than a year computing it.

“What we are seeing is that the warm water is pushed away from Antarctica by these ocean currents,” says Van Westen. Thus, the Antarctic ice will become more isolated from the rest of the ocean. As a result, some areas near Antarctica are even cooling rather than warming – even as the temperature across the ocean increases.

If the water around Antarctica stays cooler, ice shelves in the sea will melt less quickly. As a result, less land ice slides into the sea and sea level rise remains limited. According to the model of Dijkstra and Van Westen, the melting of the ice sheet will remain on a third of the previous forecast.

By 2100, that would make a difference of about a quarter of the total sea level rise. After all, the melting ice around Antarctica is not the only cause of the sea level rise. sea. The disappearance of glaciers, the shrinking of the North Pole and the expansion of seawater also play a role.

“We were very surprised with these results,” says Van Westen. “You often read that the melting of Antarctica is accelerating, that expectations are deteriorating. Our article has a more positive message.

What does this mean for a low-lying country like the Netherlands? Is there more time to deal with rising sea levels? “No, you can’t draw that conclusion,” says Erwin Lambert, a polar oceanographer at KNMI and not involved in the study. “I think the most important idea is that the current models still contain a huge amount of uncertainty. You need models with higher resolution. Otherwise, you’re missing out on something as crucial as the effect of ocean eddies.

Yet this new model isn’t perfect either, Lambert says. “At the moment, the ice in West Antarctica in particular is melting rapidly. But you don’t see that in the model at all. So this does not correspond to reality. It would probably be necessary to work even more closely in the area near Antarctica to be able to make good predictions.

All of this is of great importance to the Netherlands. Once the polar ice melts, it will not spread evenly over the seas of the world. It is expected that precisely the melting of Antarctica big consequences could affect sea level rise on the Dutch coast.