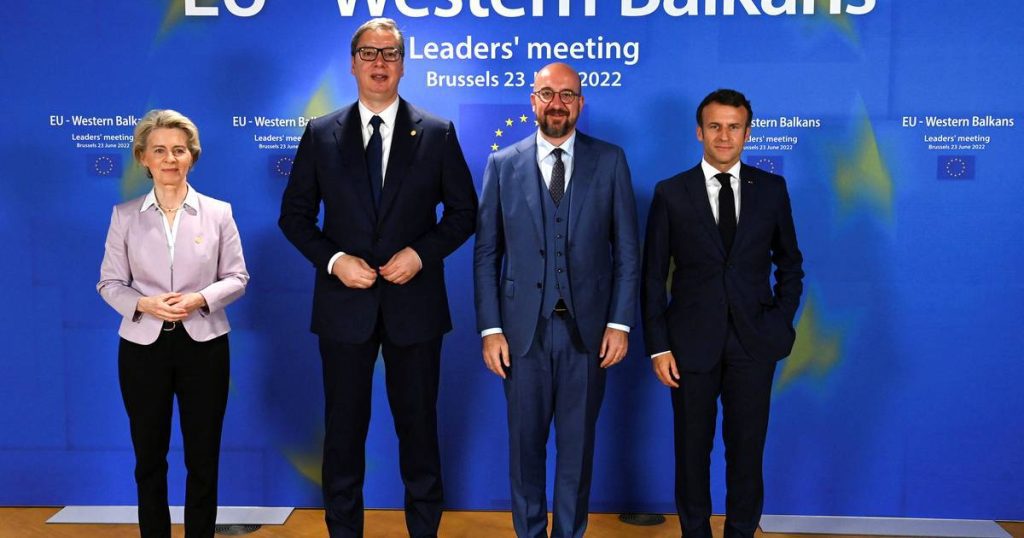 EU summitThe Western Balkans (including Serbia, Kosovo and Albania) are also counting on a rapid rapprochement with Brussels now that Ukraine, Moldova and – with some delay – Georgia are fast becoming EU candidate countries later in the day. The six countries will make their case today at a summit with the EU’s 27 national leaders.

“We are counting on a clear and unified message,” Kosovo President Vjosa Osmani-Sadriu said upon arriving in Brussels this morning. She welcomes candidate status for Ukraine and Moldova, but wants equal treatment for the Western Balkans. “Ukraine’s candidate status is of great geopolitical importance, but we also need it. If we don’t get clear signals from Brussels, others (Russia, editor’s note) will fill this space.

The 27 EU leaders should have decided today to open accession negotiations with Albania and North Macedonia, an important step for the whole region. But EU member state Bulgaria is obstructing for domestic political reasons. “A disgrace,” said Albanian Prime Minister Edi Rama. “A NATO country that takes two other NATO countries hostage in wartime. And 26 other countries watching helplessly in a chilling way.

The time between the granting of candidate status and the start of membership negotiations is therefore far too long, according to Rama. “North Macedonia has been a candidate country for seventeen years, we have eight. I think it’s a good thing that Ukraine now gets candidate status, but I hope Ukrainians don’t get too many illusions.”

I think it’s a good thing that Ukraine now gets candidate status, but I hope Ukrainians don’t have too many illusions

Serbian President Aleksandar Vucic has shown a rather indifferent rapprochement, which is currently out of the question for Serbia anyway due to the pro-Russian path the country is taking. ,,If decisions are made, so much the better, if they do not come too. In any case, we are already satisfied with the investments from Europe.

Brussels is outraged that Serbia does not support sanctions against Russia, but Vucic said Serbia condemned the Russian invasion at the United Nations and strongly defends Ukraine’s territorial integrity. “And for Serbia, but it is not always respected in Europe.”

Osmani-Sadriu thinks Serbia should choose: ,,You can’t take a Russian path and a European path at the same time. She accuses Belgrade of contributing to Russia’s influence over the entire Balkan region through its attitude.

Charles Michel, President of the European Council, promised “a strong message” to the Western Balkans on his arrival this morning, but the countries concerned will have noticed that his first statement was for Ukraine, whose candidate status has not been announced. until later in the day. summit is on the agenda. The Balkan countries will long have gone home with their “strong message”.