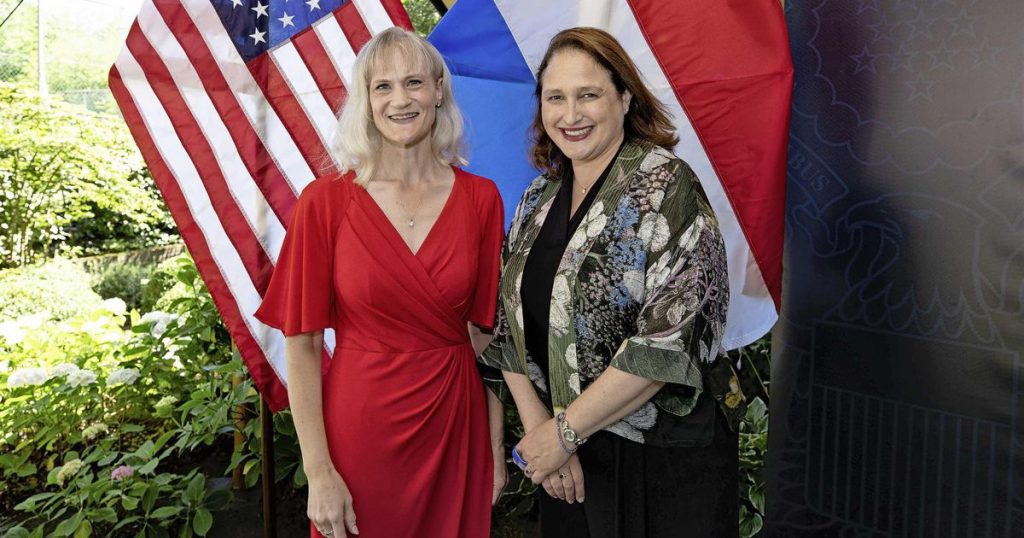 What is clear is that the proposed new ambassador, Shefali Razdan Duggal, is a loyal party leader to the Democrats: she was chair of the women’s movement that campaigned for President Joe Biden.

While she’s gone, Aleisha Woodward becomes an agent, or charge d’affaires, as she’s known in embassy circles. “I’ve been a diplomat for 24 years,” she said during Independence Day celebrations. The party with beer, cola and burgers was in the garden of the official residence of the uninhabited residence of the American ambassador in The Hague. The Chargé d’Affaires has his own residence on the Sophialaan. “Before that, I was in Washington busy with the annual arrival of 350,000 exchange students to the United States from around the world.”

She succeeds Marja Verloop, who will become Chargé d’Affaires in Frankfurt on 1 August. She said goodbye to one celebrity after another on the holiday celebrated in the United States on July 4, the day the Americans became independent from the British in 1776. Her main agenda items in recent years focused on military affairs: “mutual cooperation in Afghanistan and in recent months in Ukraine”.

From left to right Mac Mootry, with the Marine Corps working on the new barracks at Nieuw Milligen, military attachés Stein Johannessen (Norway), Juris Jansons (US) and Mark Maddick (GB) with Jan Hut, commandant of the Marine Corps.

In the smell of the barbecue on the lawn, under the tent with blue-white-red luminous garlands, the military attachés of certain NATO countries stood relaxed. “Finland and Sweden joining NATO is great news!” said US Colonel Juris Jansons. “Especially for us as a northern country,” added Norwegian Colonel Stein Johannessen. “I have to go to the House of Representatives,” Marc ter Haar, director of the Dutch-American chamber of commerce AmCham, told Merijn Boender, Dutch president of the Netherland-America Foundation. “I will ask for a more stable business climate for American companies. Now departments sometimes work in contradiction with each other!

South Korean Ambassador Yeondoo Jeong said: “King Willem-Alexander has invited our president to come to the Netherlands next year.”

The boss of Aon and director of AmCham, Marguerite Soeteman-Reijnen, had just returned from Bangkok for SER Topvrouwen, of which she is the president. She was looking forward to September: “Then the royal couple will go on a trade mission to California and Texas.”

Preparing is a big task for the new US Consul General Kate Nanavatty. She succeeds Jennifer DeWitt-Walsh, who will join Verloop in Frankfurt in a year.

Panna Orban, from the hotel school in The Hague, served a bloody patriotic drink: ,,Strawberry syrup topped with vodka and blue curacao lemonade. The American flag !”