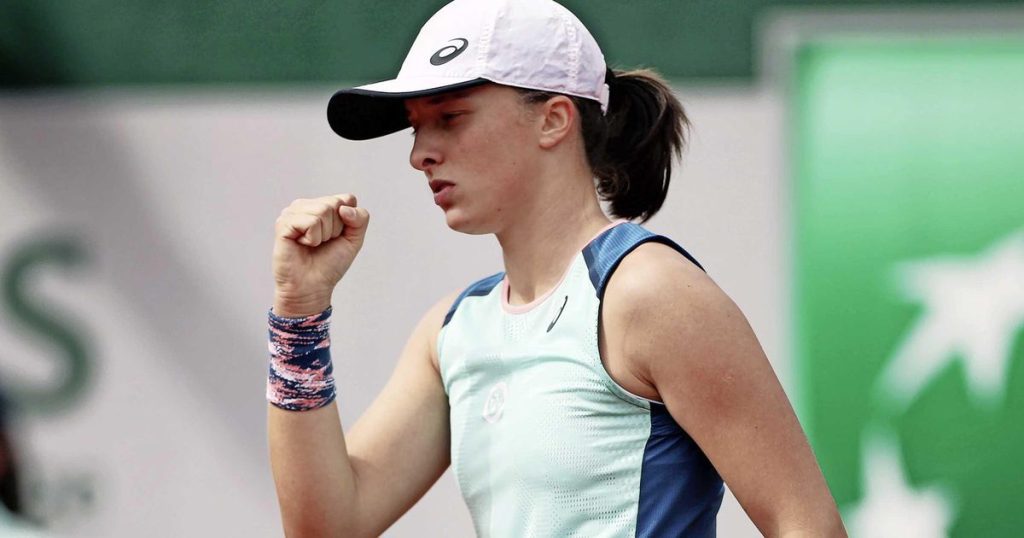 After 61 minutes, Swiatek capped it all off with a strong comeback, which proved too powerful for the world No. 43. Swiatek dominated from the first to the last point, gave no break points to his opponent and hit no less than 23 winners.

For Swiatek, it was already his thirtieth consecutive victory. The last defeat of the 20-year-old Pole dates back to mid-February. She then lost in Dubai to Jelena Ostapenko of Latvia.

“It’s about staying focused and putting pressure on my opponents. It’s quite difficult, because for each match, you have to get “in the zone”. I’m happy to play so well, especially my first time on the Suzanne Lenglen court,” Swiatek said.

In the third round, Swiatek will face Montenegro’s Danka Kovinic.

Former champion Simona Halep has already been eliminated in the second round at Roland Garros. After a strong start, the 30-year-old world No. 19 lost 2-6 6-2 6-1 to Zheng Qinwen, the eleven-year-younger Chinese.

Halep won the Grand Slam tournament in Paris in 2018. Four years ago, she was too strong for American Sloane Stephens in the final in three sets. A year after her title at Roland Garros, she was also the best at Wimbledon.

The only 19-year-old Zheng, world number 74, has never played in the main tournament at Roland Garros before. She made her Grand Slam level debut earlier this year at the Australian Open. In Melbourne, she reached the second round.

The Romanian asked the doctor at the end of the first set she had won. “It was a panic attack,” she said. “I didn’t know how to react, because I don’t have to deal with it often. I led the game, I played well, but I completely lost. I couldn’t concentrate anymore.”

Halep, who in addition to Roland Garros also won Wimbledon in 2019 and was world No. 1 from 2017 to 2019, said she had a pretty tough time after the match. “But now it’s starting again. I have recovered and am learning from this moment. It was nothing dangerous. The doctors checked everything and everything was fine.

Halep struggled on the track:

The tournament is also over for ninth seed Danielle Collins. The American had to recognize her superiority to her compatriot Shelby Rogers with 6-4 6-3. Earlier this year, 28-year-old Collins reached the final battle at the Australian Open. She lost in straight sets to Ashleigh Barty in Melbourne, who ended her career earlier this year.

Karolina Pliskova was also eliminated early in the day. The Czech, who finished eighth, was 6-2 6-2 without a chance against France’s Leolia Jeanjean, who sits 227th in the world rankings.

Paula Badosa, number 3 on the placement list, managed to avoid elimination. The Spaniards had to go deep to get rid of Kaja Juvan of Slovenia: 7-5 3-6 6-2.

The female title holder, the Czech Barbora Krejcikova, was eliminated in the first round.