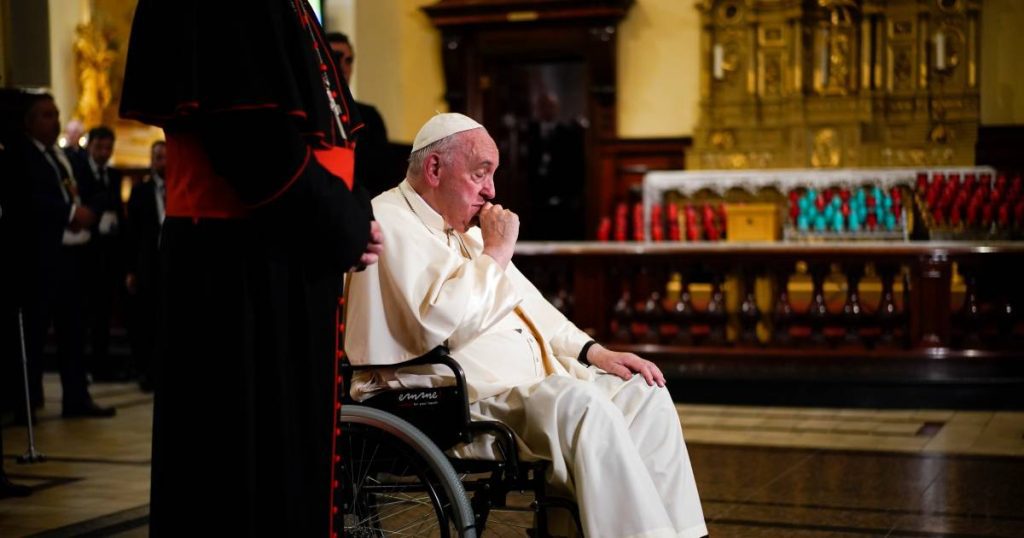 Pope Francis wants to slow down because of his health problems. The 85-year-old church leader shared this on his way back from his special trip to Canada. It is time, he said, “to think about the possibility of withdrawing”.

The pope mentioned the trip to Canada, where he impressed with his apologies to the natives, ‘a challenge’. The Pope has been suffering from knee problems for some time since straining ligaments in his right knee earlier this year. Earlier this month, the church leader had to cancel a visit to Africa because of laser and magnet therapy he was scheduled to undergo.

On his return from Canada, the Pope shared, “I think that at my age with these limitations, I have to conserve my energy to continue serving the Church. It is also time to think about the possibility of resigning. It is not yet so far that he will actually resign, Francis reassures journalists, but “the door is open”. According to him, there is nothing wrong with a pope resigning. “It is not weird. It’s not a disaster. You can change the pope,” the church leader himself said.

In 2013, his predecessor, Benedict XVI, became the first pope to step down due to health issues, both mental and physical. Francis has often shared that he didn’t think it was a rash decision and that while his health was deteriorating rapidly, he saw it as well.

Pain when standing up

The pope may have impressed in Canada, but it was clearly an arduous journey for the 85-year-old. For example, he had to be moved in a wheelchair and he needed a cane to support himself. It was also clear that the pope was in pain when getting up from the chairs. An operation is not possible at the moment, according to Francis himself. He is said to be still suffering from his abdominal surgery in July 2021, which required the removal of 33 centimeters from his colon.

So far, things seem to be going well in Vatican City — the pope looked just as energetic on day six as he did on day one in Canada — but it’s unclear how long that will last. “I try to travel as much as possible and be close to people, because I think that’s the best way to do my job as pope. I can’t say more than that.