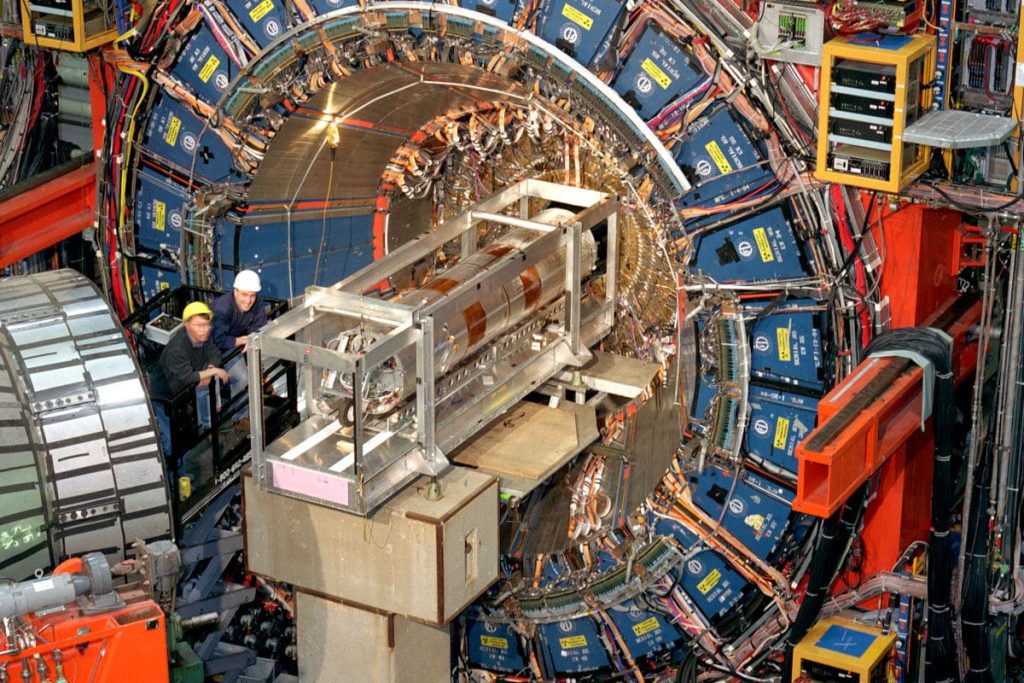 The mass of the so-called W boson is larger than previously thought, a team of physicists have concluded after years of analysis. And that could indicate new particles.

By itself, we have a theory that works well for particles and the forces that act between them: the Standard Model. The problem is that this theory cannot explain everything. For example, gravity is not one of them. And also black matter — the invisible stuff that makes up about 84% of the universe — is not made up of particles that are in this standard model.

This is why it is always very interesting when a the measurement does not seem to correspond to the standard model† Because it may be a first indication of particles, forces or other phenomena which still fall outside the Standard Model – and with which a number of open questions can be answered. Latest example: the mass of the W boson which, according to the team behind the American CDF II particle experiment, is slightly larger than the standard model predicts.

First of all, what type of particle are we talking about here? The Standard Model contains three forces, or three ways particles can interact with each other. They are the electromagnetic force, the strong (nuclear) force and the weak (nuclear) force.

For each of these forces, there are one or more “messenger particles”. For example, particles that attract or repel each other as a result of the change in electromagnetic force photons from. The strong force is transmitted by so-called gluons. And the weak force messenger particles, which among other things play a role in radioactive decay, are the so-called W and Z bosons.

These are the W bosons. We know that it must weigh about eighty times more than protons and neutrons – the particles that make up atomic nuclei. Particle physicists have been trying to determine more and more precisely what this mass is for decades.

They do this with particle accelerators like the Large Hadron Collider (LHC) near Geneva. In it, the particles collide with each other at enormous speed, resulting in the formation of other particles. One particle that can appear in such a collision is the W boson. This then decays in a fraction of a second into other lighter particles, but from these other particles you can deduce – with great pain and efforts – what this short-lived W boson must have weighed.

The physicists behind Fermilab II’s Collider Detector (CDF II) have now achieved the latter with twice the accuracy of previous measurements. They used quite “old” data: the CDF experiment recorded collisions in the American particle accelerator Tevatron, which was already retired in 2011. But the data that this machine produced is still being updated. to analyse.

And in this case, such an analysis produced a rather surprising result. Based on more than 4 million particle collisions that produced W bosons, CDF scientists arrive at a mass of 80.433 megaelectronvolts (MeV). (The electronvolt is the unit of mass particle physicists like to use. A proton or neutron weighs about 1 MeV.)

Why is it crazy? Because you can also calculate the mass of the W boson, using the standard model. You then plug in the masses of all sorts of other particles, such as those of the Higgs boson discovered in 2012.and then you get… 80,357 MeV.

What could be the cause of the difference between the calculated and measured mass of the W boson? For example, because of particles that have so far gone unnoticed in experiments, because they are too heavy or because they show too little of themselves. “Such particles can alter the predicted mass of the W boson,” says CERN particle physicist Maarten Boonekamp, ​​not involved in the CDF study.

What kind of particles are they? In their article, incidentally the cover of the scientific magazine Science, CDF scientists list a number of options. Maybe the Higgs boson is secretly made up of smaller particles. Or who knows, there may be so-called “dark photons” that barely interact with ordinary matter.

But in fact, we have no idea at this point. “Dozens of theoretical papers are likely to appear in the coming weeks and months investigating the implications of this result,” predicts Boonekamp.

What could be behind the result if it were not new particles or phenomena? According to Boonekamp, ​​the CDF team’s experimental analysis is exceptionally good – but the team uses outdated theoretical calculations. “The team does not mention the many developments in this area over the past 20 to 25 years. Whether this matters for their results remains to be seen. But for the moment, it is an important point of attention.

An important next step is to see if other teams can confirm the result. The eyes are mainly on the various experiments that study collisions in the LHC particle accelerator. So far, they are still far behind the CDF team in terms of accuracy, “but they are working to reach the same level”, explains Boonekamp.

Additionally, data collected with another Tevatron experiment, D0, could be reconsidered, write particle physicists Claudio Campagnari and Martijn Mulders in a commentary on the CDF article. And future particle accelerators like along 100 kilometers Future circular collider will also be able to tell more about the mass of the W boson – but this is in the longer term.

For now, we are only talking about a team that came up with a surprising measure. A measure that could potentially have far-reaching consequences – but which could also be discarded if other physicists rush into it.