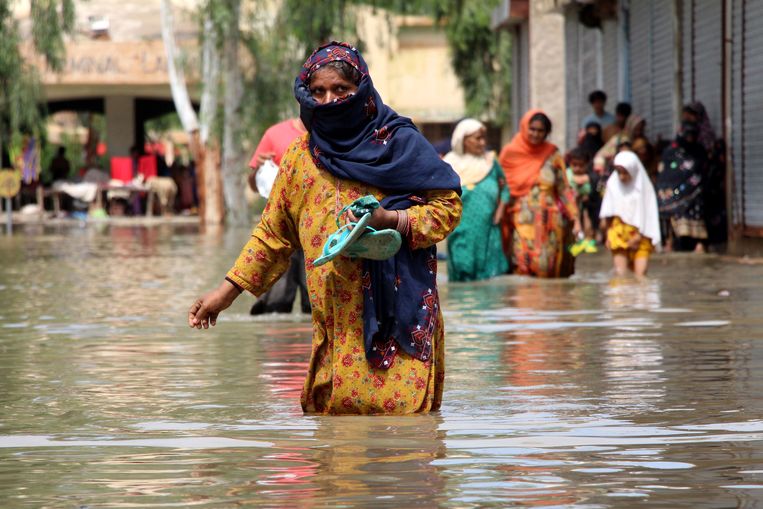 The Pakistani government has requested international assistance as the disaster is beyond the country’s capacity. The United States, United Kingdom, Iran and the Emirates have already provided aid, but it is still far from sufficient.

The country has almost nothing of its own, as its economy was already in free fall before the flood. According to Home Ministry official Salman Sufi, Pakistan “had just recovered when the monsoon disaster struck”.

Prime Minister Shebas Sharif has made 45 million euros available for the worst affected areas, but this is only a fraction of what is really needed. According to the Prime Minister, 33 million people have already been affected, or 15% of the entire population. A million houses were reported destroyed, 150 bridges washed away, roads badly damaged and an unknown portion of crops destroyed.

For many residents, the warnings come too late. Or too early: Many warnings went off in the middle of the night, and as a result people were again surprised by the rapidly rising waters in the morning, so they had to be rescued with helicopters and boats. Rescue efforts are also made more difficult in places because the water, which comes from the snow-capped mountains, is freezing cold.


Sharif categorically compares the current disaster with those of 2010 and 2011, which have so far been considered the worst flood disaster in the history of the country, where floods occur almost every year.

Senator Sherry Rehman warns that the current “monstrous monsoon” is not isolated. Pakistan is also grappling with heat waves and wildfires, putting it on the front lines of climate change. Rehman calls what is happening now a “serious climate catastrophe”, which in Pakistan’s case is also fueled by melting glaciers in the mountains to the north.

“Pakistan has the most glaciers of any country outside the Arctic.” Global warming is melting those more than 7,200 glaciers faster and faster and overflowing high-altitude ice lakes, adding to all that rainwater, Rehman says, and amplifying the monsoon catastrophe. Rehman told Turkey’s TRT: “By the time the rains subside, a quarter or a third of Pakistan will be under water.”

The water cargo from the northern mountains is now moving slowly, including via the Indus River, to the south, where Sindh province has also been badly affected. On Sunday alone, 119 people died from flash floods in Pakistan, mostly in the northern province of Khyber Pakthunkwa. Tens of thousands of people had to be evacuated from the northern basin of the Swat River.