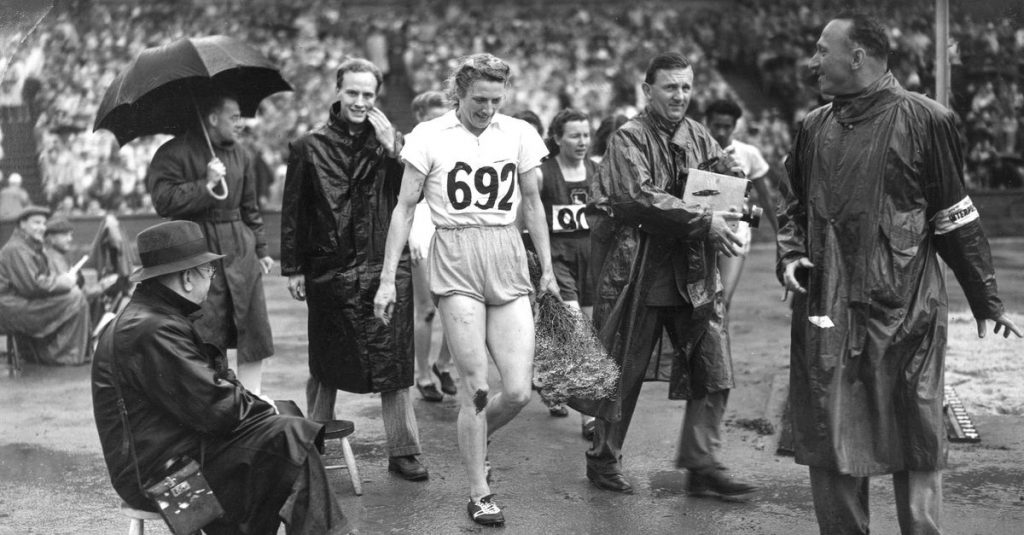 Anyone entering the French Olympic Committee building, located at number 1 Avenue Pierre de Coubertin in Paris, will not miss the bronze statue of the baron himself, founder of the modern Olympic Games. It stands in the center of the room, on a marble plinth, its name inscribed in gold letters. De Coubertin has had his hands free in his pocket since 1992. A mask is placed over his nose and mouth.

A statue has stood in a corner since March of this year. It is a more modern work of art, made of lacquered wood, silver leaf and metal, and made by students of a French art academy. A plaque bears the name of Alice Milliat, “to whom we owe women the opportunity to participate in the Olympic Games”. The statue is an omen of things to come in three years in Paris: the first fully equal Games. A historic moment.

Because the Olympic movement has come a long way in terms of women’s equality. De Coubertin, historian and teacher, disliked women’s sport – neither practical, aesthetic, interesting, nor appropriate. No woman participated in the first Games in Athens, in 1896. The Greek Stamata Revithi did not leave it at that time. The day after the Olympic marathon, she ran alone on the same course as the men. She did not reach the finish, as she was stopped at the gates of the Olympic Stadium. Women would not be allowed to run a marathon before the 1984 Games in Los Angeles.

In Paris (1900) women took part in the Games for the first time, but only in areas which, according to De Coubertin, would not detract from their feminine charm; tennis and golf. Archery, figure skating, fencing, and swimming all became Olympic for a time, but also faded from the program. The share of women at the Antwerp Games (1920) was only 3%. Meanwhile, a feminist movement was underway in France, led by Alice Milliat, teacher and passionate rower.

In 1919, she asked the International Olympic Committee (IOC) if women could be added to the Olympic athletics program, but to no avail. She then founded the Fédération Sportive Féminine Internationale (FSFI), of which she herself became president. With this organization, she organized the first Women’s Games in Monaco in 1921. It was a one-day event, with an Olympic-style opening ceremony. Initially, five countries participated, but the event became a success. In the Parisian suburb of Vincennes, on August 20, 1922, 15,000 people saw women compete in all the sports disciplines that were refused to them by the IOC.

Milliat is acquiring more and more international influence with its movement. Women’s sports federations have been formed in Britain and the United States, and pressure on the IOC to allow women to participate in the Games has increased. Milliat insisted that women should be allowed to compete in all areas of athletics and that there should be an equal number of women and men at the board level. The IOC was prepared to consult whether it would stop calling its annual Women’s Games “Olympics”. Milliat agreed, and at the 1928 Games in Amsterdam, women were allowed to participate in athletics and gymnastics for the first time.

Journalists used grotesque terms to describe what they saw after the 800 meters. According to the., Women should Chicago Tribune were thrown to the ground completely exhausted. It was far too dangerous, a British newspaper reporter thought. Time. At Pittsburgh Press they did not find it “very edifying” to see a group of women destroy each other. At the following Games, the 800-meter was dropped, to be added again in 1960.

In the Netherlands, at the end of the twenties, we did not expect an Olympic emancipation movement, but under pressure from the IOC, the athletics association appointed a coach for women. One woman of all has won the only Dutch athletics medal: Lien Gisolf, silver in the high jump.

Women’s participation in the Games was never taken for granted in the years that followed. At the Los Angeles Games in 1932, the Olympic Village was exclusively male. The women were accommodated in a separate hotel.

It was the story of Fanny Blankers-Koen’s success at the 1948 Games that showed women around the world that a 30-year-old mother of two could be capable of great things – win four gold medals and become the star of this tournament. But that didn’t mean the CIO was opening all ports.

Until 1960, for example, women were only allowed to participate in individual sports. From the Tokyo Games in 1964, non-contact team sports were added – first volleyball. Twenty years later also team sports with contact; hockey, football and water polo. From this point on, the graphs of male and female participants converge, but do not yet intersect. The most conservative sports are cycling, strength and martial arts. Weightlifting and boxing did not become Olympic until after 2000. Until 1996, the IOC carried out gender tests which were only compulsory for women. Men were exempt.

At that year’s Games in Atlanta, 7,000 of the 11,000 participants were men, 26 of the more than 200 countries did not send women, including many Arab countries. In this light, it is particularly remarkable that women have accounted for two-thirds of all Dutch Olympic medals in history.

Recognizing the need to evolve with the times, the IOC has added a chapter to the Olympic Charter in which it undertakes to “promote and encourage women’s sport and achieve equality between men and women”. The process was to be completed by 2024. The maximum number of participants has also been reduced to 10,500, half of whom must be women in three years in Paris. Although the IOC has indicated that this target has been achieved in Tokyo, this is not entirely correct; 48.8% are women, 51.2% are men. However, it has never been so “fair”.

The gap was partly closed in Tokyo by the introduction of mixed numbers; women and men compete in the same match. For example, Nigerian athlete Patience Okon George was able to run against men in the mixed 4x400m relay. She entered the final lap with a huge lead over her male teammate, who was sprinting against the women, but was passed. It was above all a spectacular spectacle. The Mixed Nations Cup in Judo has been one of the most exciting additions to the Olympic tournament.

Administratively, the committee also wanted to be a better reflection of the times, with more United Nations Member States. Until 1981, no woman had been a member of the IOC. The proportion of women IOC members has increased from 21% to 37.5% over the past two years. Women sit on 48 percent of IOC committees. It was 20% a few years ago. For the first time, the Tokyo Athletes Committee has more women than men; 11 to 6. The highest post, that of IOC President, on the other hand, has never been held by a woman. One of the four vice-presidents is Arubaine Nicole Hoevertsz, elected in Tokyo.

The Games will probably never be gender equal. Although the IOC has asked all countries to nominate both a male and female flag bearer for the opening ceremony, countries like Oman, Djibouti and Ethiopia have refused to do so. It remained without consequences. This does not mean that the IOC does not have weight. Prior to London 2012, the committee threatened to exclude Saudi Arabia from its participation if it did not delegate a woman. The country gave in to the pressure and appointed a judoka and an athlete. Nine years later, that number is still as low as ever.

Gender equality at the Games became a vital issue at the start of the year when Yoshiro Mori (83), head of the organization in Tokyo, said women are endless in meetings and it’s boring. When this became known, he had to resign. And this in a country where women’s rights are under pressure. Japan has been in the bottom – 120 out of 156 countries – in the World Economic Forum’s Global Gender Gap Index for years. But when the world is watching during the Games, things are a little different.

Two weeks ago there was a stir when Norwegian beach volleyball players decided to play their Olympic bronze medal in shorts instead of bikini bottoms. The union considered this inappropriate and imposed a fine of 1,500 euros on the duo. German gymnasts were allowed to wear long clothing during the Games, instead of the traditional leotards. Women have twice claimed their equal place at the Games.

All this should culminate in the first Games in the history of gender equality, in Paris in three years. But the host country of France still has a lot of work to do. Of all the countries in the world, they had the worst score in five Games between 2000 and 2016 in the distribution of gold medals between men and women – the Netherlands were the best. The French become Olympic champions more than twice as often as the French. In other words: the least emancipated top-level sporting country organizes the most emancipated Games. If this does not change until 2024, it could have consequences for the level of medals. To avoid this, France must train more women. It would have sounded like music to Alice Milliat’s ears.

With the cooperation of Jurryt van de Vooren