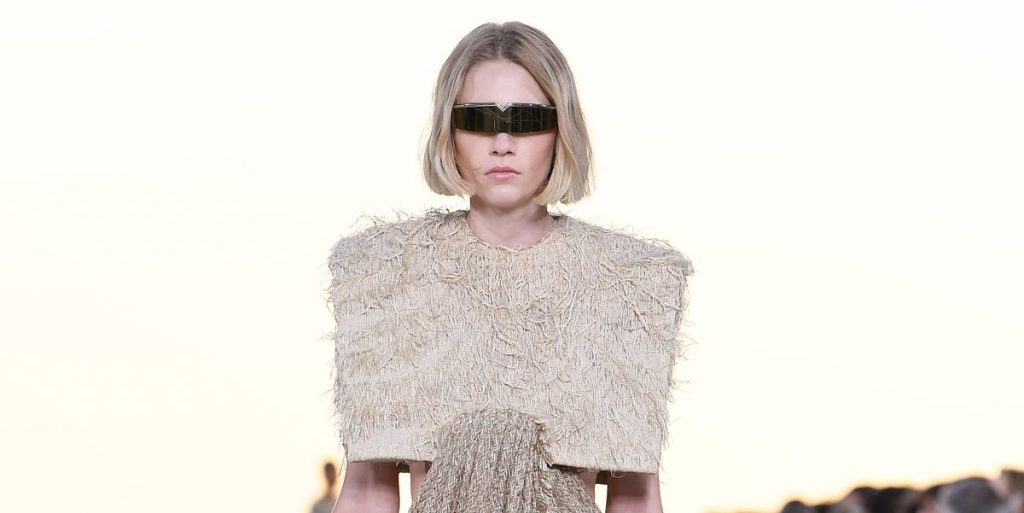 We cruise to the north, towards La Jolla. We leave behind the verdant parks, tall skyscrapers and surreal purple lilacs of San Diego. The landscape scrolls at a slow pace and reminds of a desert, interspersed with green oases with palm trees rising to the sky. It is almost six o’clock in the evening, the temperature is still mild, the daylight is slowly giving way to a warmer light and the sky is turning pale pink. Our final destination is a vast expanse by the sea, where Louis Vuitton creative director Nicholas Ghesquière found his dream location for the Cruise Show: The salt institute† This is where scientists gather during the day to conduct research in genetics, neuroscience and plant biology. From now on, it is mainly international (fashion) journalists, fashion editors and ambassadors of the French luxury house who spend the evening here. From time to time, a flash between cars and taxis skateboarder past, surprised by the crowd. Interesting detail: drive a few hours further and you are in that other place where creatives and entrepreneurs meet: Silicon Valley. Or, who, like Kim Kardashian, is captivated by Marilyn Monroe: a little further on is the hotel in which she shot the scenes of the film. Some like it hot Coronado, not too far from the Mexican border.

Jonas Salk is the namesake of the famous scientific research center. He started it in the 1960s. His good friend Louis I. Kahn designed the building, drawing inspiration from the serene architecture of monasteries and monasteries retreats for artists. Kahn (1901-1974) is consistently mentioned in the list of America’s most influential modern architects. The Design Museum in London devoted another exhibition to his work in 2018, including the Phillips Exeter Academy Library and Dining Hall in New Hampshire, the Yale University Art Gallery in Connecticut, and the National Assembly building in Dhaka, Bangladesh.

Louis Vuitton has a penchant for architecture. For example, the house often took its customers and its press to buildings designed by great masters for the inauguration of the Cruise Shows. Like the Bob Hope Estate in Palm Springs by John Lautner, the Brazilian MAC Niterói by Oscar Niemeyer, the Miho Museum in Kyoto by Ieoh Ming Pei, the Maeght Foundation in Saint-Paul de Vence by Josep Lluís Sert or the TWA Flight Center from JFK New York Airport by Eero Saarinen. After the pandemic, this is now the first time that Nicolas Ghesquière has presented his Cruise Collection outside of Paris. “It’s such a fascinating convergence of elements here: surfers on their boards meeting the Salk Institute scientists on the beach, the steep cliffs and the sunlight playing with the building. Yet I also feel a harmony here, and I also want to see my designs as reflections. A moment of contact between light and men, with the sun as guest of honour.’

The site is surrounded by low shrubs, tall palms and low citrus trees. We weave our way through the hundreds of visitors who, like me, stare at the water for minutes. At the exact time the sun is about to set into the azure sea and the magical California daylight is replaced by the candy pink evening light, the lights come on. †The show is about to begin’, the crew beckons us. The music of the Sparks, one of Ghesquière’s favorites, reverberates through the speakers, and that’s where the first model appears. Like Ghesquière’s guest of honour, the sun, he plays with light. He created designs that celebrate the sun and designs that want to protect you from the sun.

Fast glasses, bright colors, to hit materials and architectural influences – with a touch of Art Deco – were the predominant tone. Here and there, the collection even resembled the famous Indie Sleaze trend, which is currently making a comeback. Anyway, Nicolas Ghesquière presented last night his boldest collection to date. The mannequins paraded in shiny shields, which symbolically protect against the world we live in. One called them Amazons, the other saw them as Greek heroines, but above all Ghesquière considered them as goddesses† The 2023 resort collection is arguably its boldest yet. Creative director breaks all the rules, lapt dress code to his boot and this gives unique silhouettes. Ghesquière explains: “We have been experimenting for several seasons with the creation of technical effects with natural materials. The collection is a complete illusion. We used a lot of linen, as well as silk and jacquard materials. The prints are inspired by the location and photographed with a thermal camera. This leads to an optical illusion; we did not use glue or other adhesive materials. Not only that: metallic embroideries will oxidize over time, thus changing color.

Then a bit of pride nearby: Lous and the Yakuza opened the show and Felice Noordhoff closed. Lous wasn’t the only celebrity: Olympic skier Eileen Gu, model Lauren Wasser and athlete and Olympic champion Dalilah Muhammad were also there.

Editor-in-chief Miluska van ‘t Lam personally attended this magical fashion rendezvous: “When I leave the field with all the guests after the show, I see this quote printed on the stones at the last minute. †Hope lies in dreams, in imagination and in the courage to make dreams come true“, declared Jonas Salk. Mission accomplished, will say Ghesquière after this evening.

This is now Lous’ second time running for Louis Vuitton. Like Vuitton’s resort collection, the music of the Belgian singer-songwriter is downright majestic†

A modern version of the harness, in an almost animal form: the seventh look of the resort collection has been very successful. Asymmetry, superposition and here and there a nod to the animal kingdom.

The emphasis is impeccably on the waist, which is reflected in almost every look. Despite the coarse layers and protective elements, the body can be displayed again.

The gold, blue and cognac brown are directly reminiscent of Greek mythology. Goddesses wrapped in mysterious and indefinable fabrics, sexy and seductive.

In addition to mystical elements that allude to the distant past, the collection is largely focused on the future. Take the glasses frames, faster than light and protective against the elements. There’s no doubt that we’re going to see a lot of these frames. And that’s not all; Nicolas Ghesquière not only left his visitors with magical memories, he also made them want to be one of his goddesses be.

On your marks, get set, Monaco: welcome to the Chanel Cruise 2022/23 collection