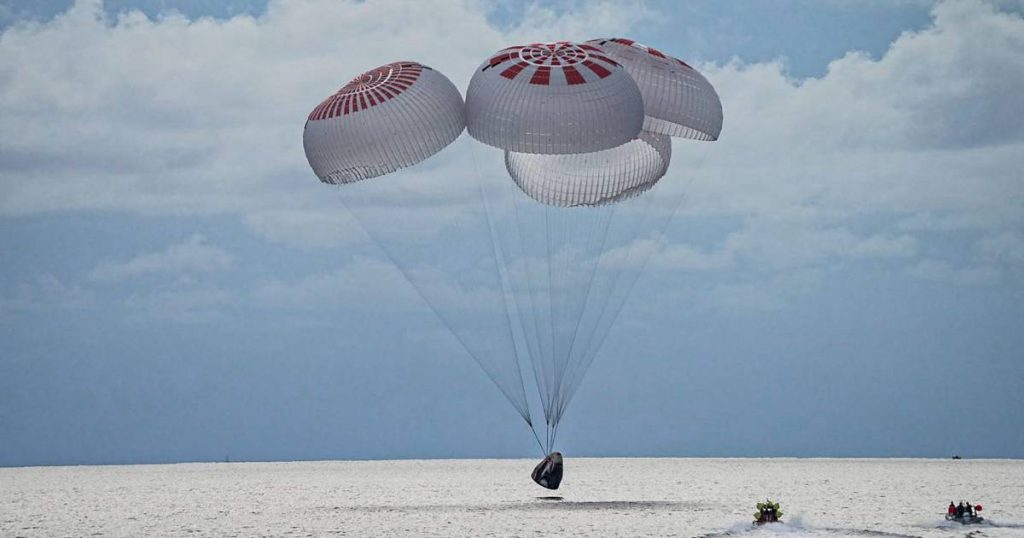 The SpaceX capsule with four American space tourists on board plunged into the Atlantic Ocean overnight from Saturday to Sunday, just after 1 a.m. as planned. This successfully completes the first space mission with only non-professional astronauts on board.

Four large parachutes slowed the descent of the Dragon capsule before landing in the water. The boats immediately set off to retrieve the boat. “Congratulations, Inspiration4,” SpaceX boss Elon Musk tweeted after the water landing.

Three days around the earth

The spacecraft with four civilians on board took off from Kennedy Space Center in Florida overnight Wednesday through Thursday. In total, the members of the “Inspiration4” mission circled the earth for three days, at a distance of up to 590 kilometers at a speed of about 28,000 kilometers per hour. Each day, space tourists have seen up to 15 sunrises and sunsets. was further from the Earth’s surface than the International Space Station, which orbits the Earth 420 kilometers away.

“Inspiration4” was the first fully commercial manned space flight. The occupants were individuals without a professional or institutional astronaut orbiting our planet for the first time. Their trip was preceded by barely six months of training.

During their flight – which will be the subject of a Netflix documentary – the quartet conducted health experiments that were paid for by SpaceX, among others. They have also set up activities to sponsor St. Jude Hospital. Talks with actor Tom Cruise and SpaceX founder Elon Musk were also on the agenda, as was the virtual ringing of the closing bell on the New York Stock Exchange on Friday.

Isaacman, who funded the mission, is the third billionaire to go to space from the United States in a matter of months. In July, Briton Richard Branson (Virgin Galactic) and ten days later Amazon founder Jeff Bezos (Blue Origin) preceded him. They only made a short trip to space and were only there for a few minutes and at a much lower altitude.

After landing at sea, the four space tourists were picked up by SpaceX and then transported by helicopter to the Kennedy Space Center. “It has been an amazing trip for us, and we are just getting started,” Isaacman said shortly after landing.

SpaceX’s next fully commercial flight is scheduled for January 2022, when the U.S. space company will launch three businessmen into space.

4 tourists go alone in space. Can they? Our expert explains