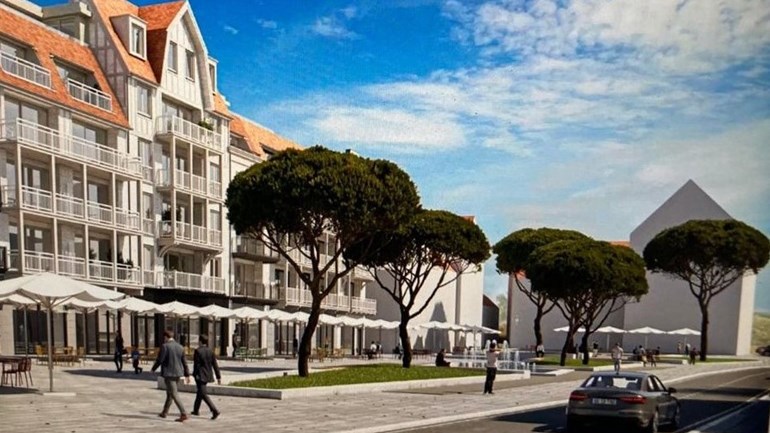 Around 100 residents and owners of second homes in Cadzand-Bad were informed on Thursday by the municipality of Sluis of the latest developments on Boulevard de Wielingen. The Duinhof is the next place for renovation in the coastal village.

The transformation of Cadzand-Bad is not yet complete, as high-rise buildings are also to be built at the southern entrance to Cadzand-Bad. On the website of the hotel Noordzee and De Wielingen. The zoning plan project made a lot of noise last month. The municipality is currently carrying out an inventory of the objections that have been submitted.

Ho, stop, so far and no further

Due to the many objections and concerns of local residents, the city council took over decision-making which would first fall to the city executive. The plan for the North Sea-De Wielingen should be on the board in June.

Alderman Peter Ploegaert informed the public on Thursday that the municipality had simply embarked on the tourist development of Cadzand-Bad – enshrined in all kinds of political plans – and could not stop. He admitted that there is also a group of people who say: “Enough is enough” or “who aspire to the Cadzand-Bad of thirty years ago”.

However, the train does not want to and cannot stop, Ploegaert believes. “It’s hard to say in the meantime, ho, stop, so far and no further. That wouldn’t be realistic or fair to say to those who have been planning for years.”

For Duinhof-Noord, Compagnie Het Zoute, in collaboration with the contracting company Van der Poel, is developing a building with shops on the ground floor and 46 apartments above. These are spread over four floors with an underground car park below. The location of this Duinhof-Noord is, according to Davy Labeeuw of the Compagnie het Zoute, a place of great importance for the entrance to Cadzand-Bad. “This is the first place you meet.”

Duinhof is traditionally a small square with shops and a parking lot. The buildings on the north side are quite dated. In recent years, the Badhuis building has already been built on the dunes, the Caricole beach pavilion has been renovated and the Hotel De Blanke Top has been renovated and extended. A new apartment complex will therefore be added after this year.

Stroll past the shops

The public did not comment on the construction plan, probably because the height is still limited. But a number of people questioned whether there was enough interest from entrepreneurs to occupy the commercial spaces under the apartment complex.

“We have to pay attention to it, so that it becomes attractive for people to walk and shop in Cadzand-Bad,” said Alderman Ploegaert. Davy Labeeuw of Compagnie Het Zoute assured that most stores are already optional. Sales will start at the end of this year.

Cadzand-Bad should be car-free as much as possible, Ploegaert said. Long-term guarantors can use the existing car parks. People do not intend to park in the center for a longer period, for example at the shopping center on Duinplein. The question of whether the access roads can cope with the growing crowds is included in the research on mobility on the coast.