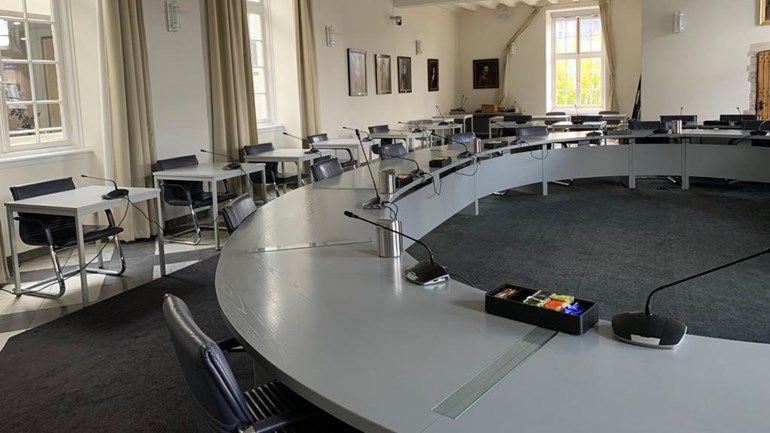 Yesterday’s agenda included the renovation of the council chamber at Hulst town hall, and this publication sparked much discussion in the city council. For no less than 180,000 euros, this room undergoes a complete metamorphosis. Not only with new furniture, but also with new carpets, new curtains, better ventilation, good air conditioning, better acoustics and a coffee corner. Loose cables are also neatly concealed in all tables.

After thirty years the chairs are really worn out

The boardroom gets the same look and feel like the current committee and conference room, which has already been redeveloped. The chairs are also the same, so it’s easy to slide between the two pieces. According to the college, the renovation is not ahead of its time, as most of the furniture is already twenty to thirty years old and is now badly worn.

It can always be more luxurious, but it still looks neat and it’s still pretty good “

Paul van Kerckhoven from Groot Hontenisse found that not too bad. “It can always be more luxurious, but it still looks neat and it’s still pretty good.” As far as his group goes, there are more pressing issues that Hulst can spend his money on. “Look at the sports facilities, these are also the city’s calling cards.”

Good businesses in your town

CDA member Wim Verdurmen also struggled with the investment. “Can’t we rent the boardroom to get extra income,” he suggested. He found it particularly bad that a furniture store from his own municipality was not chosen, instead of a company from Zuidzande. “There are really good businesses in the town, even Dethon can do it!

Morres would certainly have liked to win the job, Jos van Eck van Hulst Plus knew that. “Buy local is the motto. Then Hulst has to follow the text on the poster himself. If not, what signal would you send to citizens? “

Mayor Jan-Frans Mulder reacted with pity to the suggestion that the council was not looking at its own businesses. “As if we weren’t doing it!” We still do. According to him, a specialist company was chosen which also supplied the furniture for the committee room. He said there had been a good discussion with Morres to purify the air.

Mulder assured that Hulster firms had been hired for the technical adjustments of the boardroom. He felt nothing to rent the space, to recoup money from the investment, or to postpone the renovation. “The council chamber is not a party center. And the costs will only increase with the delay, he fears. “Do it or don’t do it,” he advised.

The soup was ultimately not eaten as hot as it was served. The bill was passed with fifteen votes in favor, five against and one abstention.