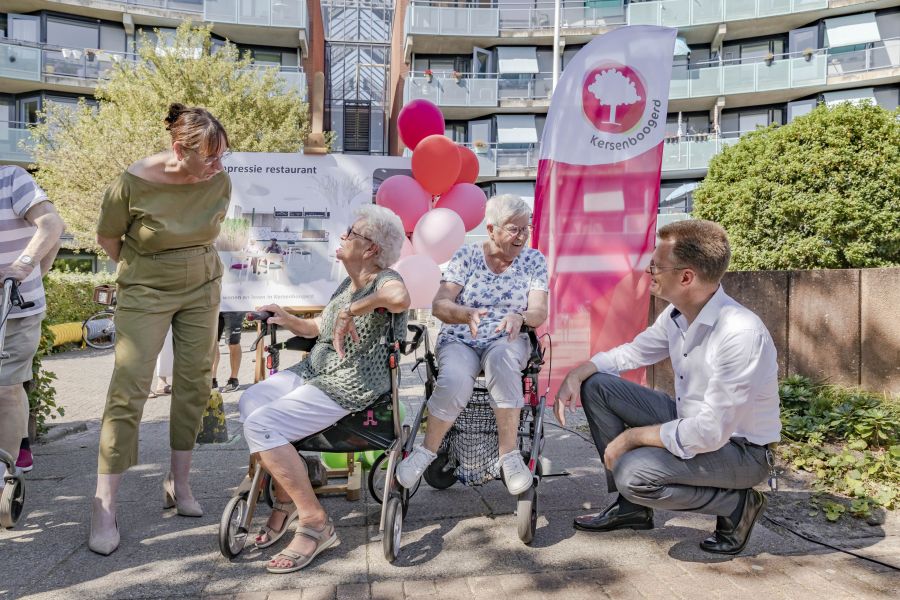 Betsy Perk work begins at the end of August

The first activities in the central area of ​​the Kersenboogerd are at Betsy Perk. The contractor Hemubo begins, on behalf of Intermaris, with the maintenance and durability of the houses. Such as replacing windows, painting window frames, installing mechanical ventilation and replacing water and energy meters. Intermaris also opts for climate adaptation. A green roof is an example of this, which has a cooling effect on the entire immediate environment. And Betsy Perk is also the first residential complex to eventually be connected to a heating network.

“In addition to making the houses more sustainable, we are also creating a beautiful ‘living room’ for the neighborhood. The construction company Ooijevaar will work on it. We have put a lot of energy into it,” says Cees Tip, Managing Director of Intermaris “It is a good place to call home, but also a space for meeting and social activities. These issues are not part of our main task, but together with our partners and the residents, we are there. lets go.

Alderwoman Karin Hakhoff agrees: “For Betsy Perk, the municipality is carrying out an exercise course and the redevelopment in place Olga Commandeur as an incentive to do additional exercise. The rest of the central area will also be made scalable and a safe and beautiful public space will be created. Neighborhood for the neighborhood and with the inhabitants.’

From the neighborhood program Opportunities for the Kersenboogerd, the Patio-Pergola-Prieel neighborhood is the first to act. In the spring, Intermaris visited the inhabitants. Cees Tip: “In addition to an explanation of the works and a registration of the house, the residents were invited to think about the plans. Many residents signed up. This resulted in a think tank. At the beginning of September, Intermaris and the municipality will discuss with the inhabitants the plans for rental accommodation, porches and passageways.

These will then be further developed with the focus group. Alderwoman Karin Hakhoff adds: “These developments increase safety in the neighborhood. No more stealth creep. We also guarantee this security through the approach that we will adopt in public spaces, such as interior courtyards, meeting spaces and the development of greenery. In the fall, we will continue with the inhabitants in order to realize this safe and sustainable public space.

“The many conversations with residents also revealed a need for a social neighborhood approach that we are working on. This reduces the vulnerable position of the residents of the central zone. A neighborhood social table was created with strong collaboration between entrepreneurs, social organizations and residents. And since the beginning of the Kansen voor de Kersenboogerd program, many initiatives by residents have been stimulated and facilitated.

Pleasant to live and live in the central district of Kersenboogerd