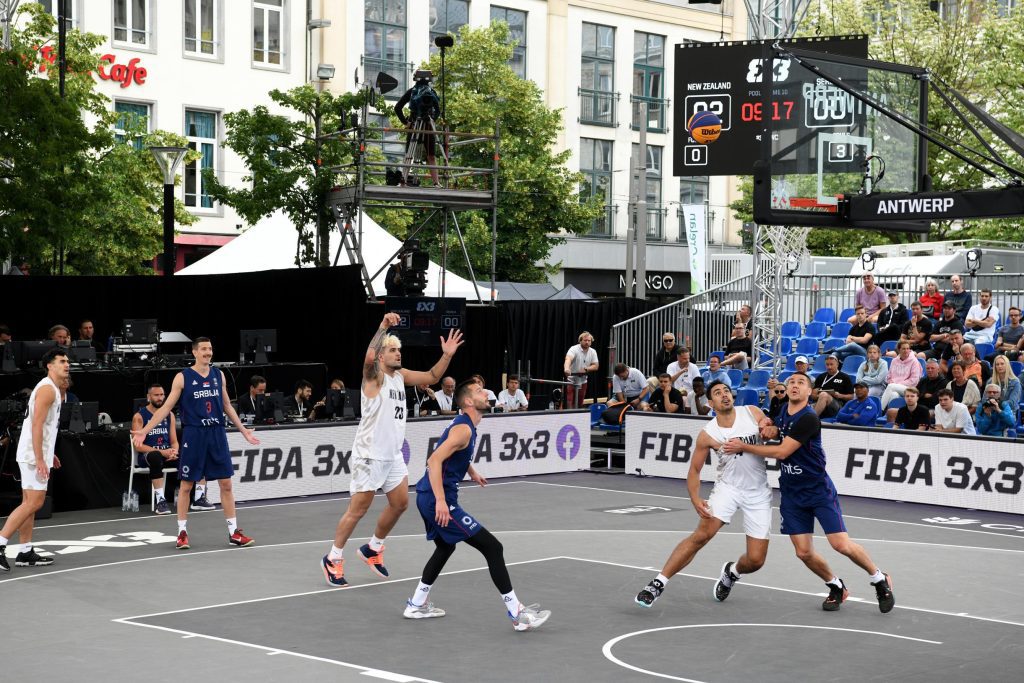 READ ALSO. IN PICTURE. Antwerp Groenplaats transformed into a basketball paradise for the 3×3 World Cup

Admittedly, with four players such a haka is not as impressive as with a full rugby team, but it can still count to open a 3×3 Basketball World Cup. The New Zealand players faced Serbia in one of the first games of the five-day tournament.

It happened under the leadership of a somewhat hyperactive DJ who had brought his best hip-hop records and under the cheers of many supporters, who usually don’t like 3×3 at all, but surrendered at the Groenplaats for the atmosphere.

READ ALSO. Antwerp is the basketball capital of the world: everything you need to know about the 3×3 World Cup

Sixth-grade students at Sint-Lievenscollege had the most decibels on Tuesday morning. To celebrate the end of their exams, they were allowed to take a trip to the world championship. The 3×3 has few secrets for them.

“Through the Belgian Basketball Federation, our students received a 3×3 initiation at school during PE class. The basketball players among them already knew a little about the sport, but for the rest it was new. Now they can see how it really works,” says Professor Jeroen Mertens.

We are allowed to disturb classmates Jules (12) and Iker (11) in between. But not too long, because the concentration on the match is excellent. “We are basketball players ourselves and have played 3×3 before at the club. It is sometimes a pleasant change, and above all fun to watch. It’s a shame that we can’t see the Belgians playing, we’ll have to go back to school to train for our proclamation,” they say.

The Groenplaats has been transformed into an arena with several stands. Not only the fans take their seats there, but also the stars of the other teams, who secretly want to keep an eye on the competition. Among them Anja Fuchs-Robetin, Alexia Allesch, Camilla Neumann and Michaele Wildbacker: four nervous Austrians in red sweaters. They will be on the field for the first time tomorrow.

“It’s our very first world championship, so we don’t know what to expect. In regular basketball, we could never become champions; or at least not for the first two hundred years. In 3×3 much more can happen and it all depends on the match itself. It’s unlikely that we’ll do really well here, but never say never,” laughs captain Anja.

The 3×3 World Cup will be held in Austria next year. “I hope it will be tackled as big as here in Antwerp. It’s great fun to be able to practice our sport in front of such a large audience. 3×3 is gaining popularity everywhere thanks to the Olympic Games. We can only congratulate ourselves. »

Tonight at 5:30 p.m. our very own Lions are due to play for the first time. Only then are many people expected. We will have to wait until Wednesday for the Belgians. The World Cup runs until Sunday.