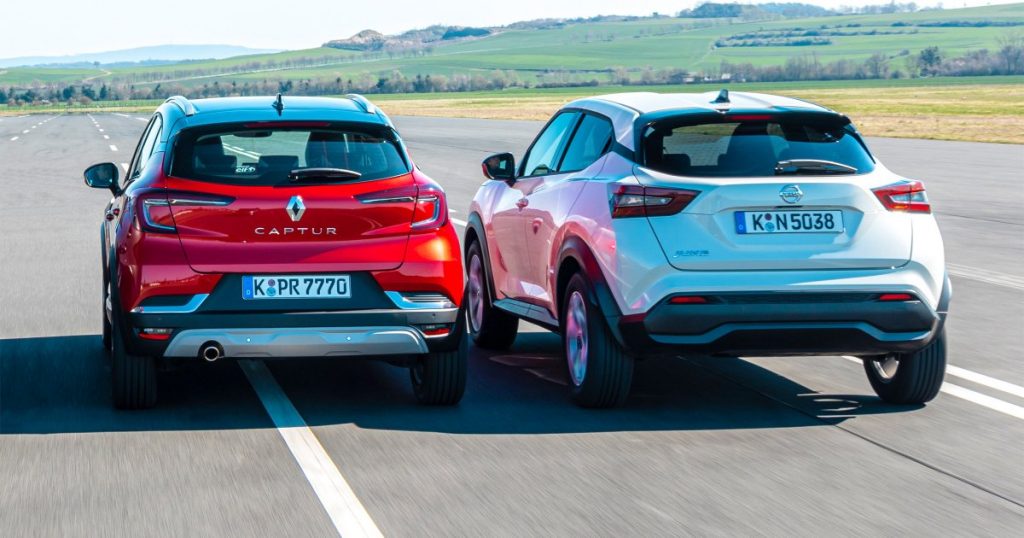 Like the current Renault Clio, the Renault Captur and Nissan Juke are on the Common Module Family B (CMB) platform. You don’t just see from the outside that it doesn’t have to produce a uniform sausage. You also notice it when you settle in there. especially in the back. The Captur offers the best feeling of space in both rows of seats and adds a sliding rear bench. With the bench seat in the standard position, average rear passengers have ample legroom.

Behind the benches, there is still room for 422 liters of luggage. Do you carry bench seats with short legs and large bags in the Renault Captur? Slide the sofa forward and there is a 536-liter luggage compartment at your disposal. If you put the sofa in the rearmost position, the rear passengers can stretch their legs considerably, but only 351 liters of material can fit in the rear.

What is the size of your Nissan Juke?

In the Nissan Juke, there is nothing to slip with the back seat. If you need more luggage space than the standard 422 liter, you have to fold down (part of) the rear seat backrest. Rear passengers, on the other hand, must comply with the standard legroom. Which is slightly more limited than in the Captur. In addition, the side windows of the Juke curl quite far inwards, which limits the lateral headroom.

There was a time when French car manufacturers tried to give their models an increasingly “German” driving style. This gave fans of the French ‘old-fashioned’ suspension a lot of heartache. Meanwhile, French brands are reluctant to retrace their steps. This is exemplified by the Renault Captur, which gently but fairly treats ledges, manhole covers and even severe frost damage. Fortunately, this smooth suspension tuning at high speeds on a wavy road surface does not degenerate into a swaying body. It would be a big step in the past.

Anyone who drives the Nissan Juke won’t easily sing a lullaby – quite the contrary. The Japanese have a firmly tuned suspension. Short bumps are clearly communicated to occupants. That hustle and bustle on board never really goes away, also because the rear axle is an even bigger field jump than the front axle.

With its flexible and balanced chassis, the Renault takes its Japanese cousin in a firm grip. When the Captur also throws in its finer furnishings and better sonic comfort, the Juke must quickly throw in the towel in the comfort chapter.

Are you curious to know what is the link between the Renault Captur TCe 140 EDC and the Nissan Juke DIG-T 114? You can read it in our full comparison test Auto preview number 4 of 2021.