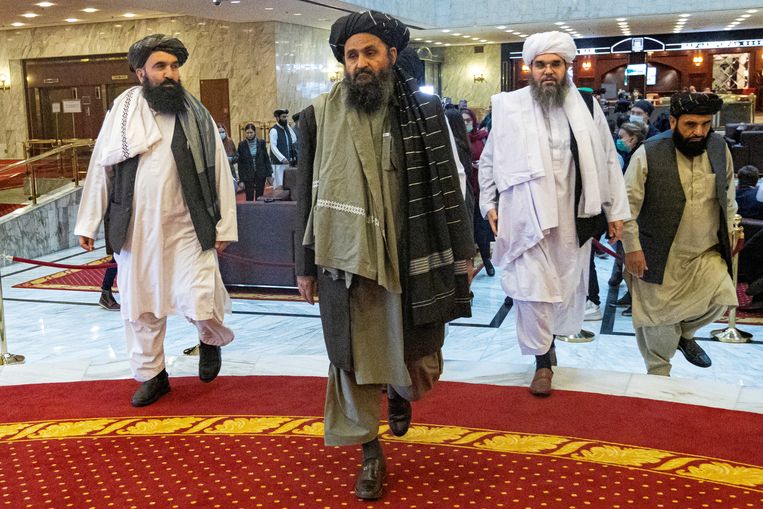 As Baradar was greeted by supporters in Kandahar, the hometown of the Taliban, the evacuation of Western personnel and Afghans finally began. Two Dutch evacuation flights were also able to take off.

The return of Baradar, the second man in the movement, indicates that the Taliban will soon form a government to officially take power. He has been busy discussing this with the rest of the upper Taliban in Qatar, the Gulf state where the United States made the agreement for its withdrawal from Afghanistan.

Baradar was flown to Kandahar by the Qatari Air Force in an American-made C-17 transport plane. Just before his departure, Qatari Foreign Minister Mohammed Al-Thani called on Baradar to “guarantee the progress made by the Afghan people in recent years”. Taliban leaders have emphasized in recent days that they will protect women’s rights, but it is still unclear what that will mean in practice.

As the supporters chanted “Allah akbar,” Baradar was taken in a convoy to a safe haven in the city upon his arrival. It is still not known when he will travel to Kabul. Earlier this week, a satisfied Baradar in the Qatari capital of Doha, along with other Taliban officials, watched footage of Taliban fighters breaking into the presidential palace on a laptop.

The Taliban leader fled Afghanistan to Pakistan after the 2001 US attacks. He had been in prison since 2010, after the Americans finally found him after years of searching. However, in 2018 Baradar was released at the request of the United States to begin negotiations for a political solution in Qatar, where he has remained since.

Britain’s top military leader Nick Carter made a strong appeal on Wednesday as the world fumbles in the dark over how the Taliban will rule. Carter advocated giving the benefit of the doubt to the Taliban leadership, who ruled Afghanistan with a firm hand until 2001. “We have to give them the space to form a government and show their credentials,” the official said. high soldier. British Prime Minister Johnson later told parliament that London would judge the Taliban by their actions, not what they shouted.

Mike Pompeo met with the head of the Taliban’s political bureau, Mullah Beradar on September 12, 2020.

Beradar is now on the verge of becoming the new president of Afghanistan.

President Trump released Beradar from a Pakistani prison in 2018.

The Americans want to dramatically increase the evacuation of their own embassy workers and Afghan citizens in the coming days, to around 5,000 to 9,000 a day. On Tuesday alone, 11 military transport planes brought out of the country some 1,100 US citizens and their families, as well as Afghans who had worked for the United States. The United States has reportedly evacuated approximately 3,000 people.

President Biden’s national security adviser Jake Sullivan said the Taliban had secured a “safe retreat” from civilians during the talks. The Pentagon has confirmed that US officers are holding several daily security meetings at the airport.

It is not known until when the Taliban will be ready to accept evacuation flights. The top US commander for the region and the Middle East, General Frank McKenzie, made a surprise visit to the airport on Tuesday. McKenzie also maintains contact with the Taliban.

Evacuation flights from other Western countries have also intensified. UK Home Secretary Priti Patel said London has so far evacuated 1,000 civilians a day since the Taliban took power. The first transport plane landed in Germany with around 130 evacuees.

Minister Kaag announced that the first two Dutch evacuation flights had taken off in the morning. The number of people on board has not been revealed. An earlier attempt to retrieve Dutch and Afghan citizens failed, in part because US soldiers did not allow Afghans to enter the airport.