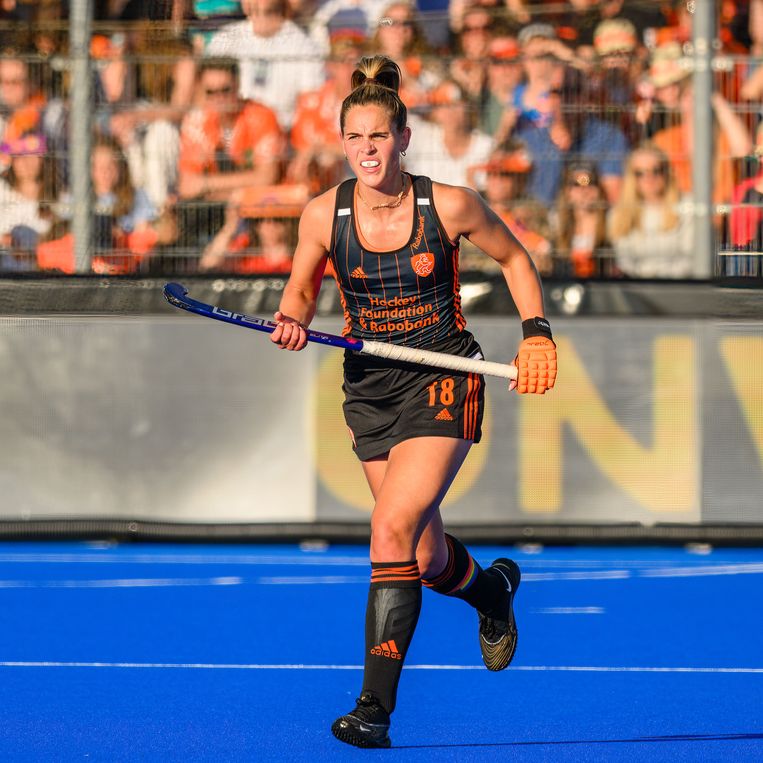 There she comes onto the pitch first, waving to the crowd, at the front of the lineup, in a full Wagener Stadium. Look for family and friends. Wave once more and sing along with the Wilhelmus. “I had goosebumps when I got up. Really cool,” says Pien Sanders proudly.

It is her turn against Germany to wear the captain’s armband during this World Cup, a tournament she missed in 2018 due to a concussion. “I won’t deny that it’s something special. You are captain at the World Cup, of the Dutch team, against Germany. And then a big smile. Sanders didn’t see his election coming, she admits. “I’m surprised, yes. In a positive way. I am honored.”

Three captains were democratically elected. Each player received two notes, wrote a name on them and placed them in a box. Most votes counted. Besides the 24-year-old Den Bosch defender, Xan de Waard (26) and Marloes Keetels (29) have also been highlighted. For example, the different age categories are represented within the selection.

The Sanders captaincy is nothing new. She also wore the band in Pro League duels with USA and China, but now it’s different. “In the Pro League it seems a bit elusive because a lot of girls have carried the band. Now that you’re at a World Cup, you think more about what you want to say up front. You want to hit the girls anyway .

What did she say during the pre-match chat against Germany? Sanders thinks back to the moment for a moment. “Frederique Matla is playing her hundredth international match, in a sold-out Wagener, against Germany. I don’t think it could be better. Enjoy and show everyone how insanely good we are.

Three captains. Good. But who wears the belt when? Do they play rock, paper, scissors? “No,” Sanders replies with a laugh. “We came onto the pitch with the special jackets for the first time against Ireland and Xan knows all about that statement (more attention to diversity and inclusiveness, red.), Marloes wanted to be against Chile, so that she could immediately visit family and friends after the duel with Germany. And against Germany, it seemed very pleasant to me.

There are no rotating captains in any other sport. “Maybe we are precursors,” jokes Eva de Goede, the undisputed captain until her serious knee injury. To allow him to rehabilitate in peace, the tape was (temporarily) removed from him. Then seriously: “I think it’s good that three people share it. It’s not just these three girls, either. Everyone realizes that we are all responsible for “us”.

Sanders doesn’t think it’s a bad choice either. “Whether it’s one person or six people or maybe all eighteen; It’s about making the team feel comfortable here. Interim national coach Jamilon Mülders doesn’t care. “The captain is the representative of the team, not the national coach” is his position.

Does Sanders consider himself one of the new leaders of this Orange? “Not necessarily. Under the new national coach Paul van Ass, it could just be different,” replies the team booster, who takes full advantage of it.

Sanders does not yet know how the distribution will be done later in the tournament. “We think it would be good if Marloes was on his very last international game.” Of course, she hopes for the final.