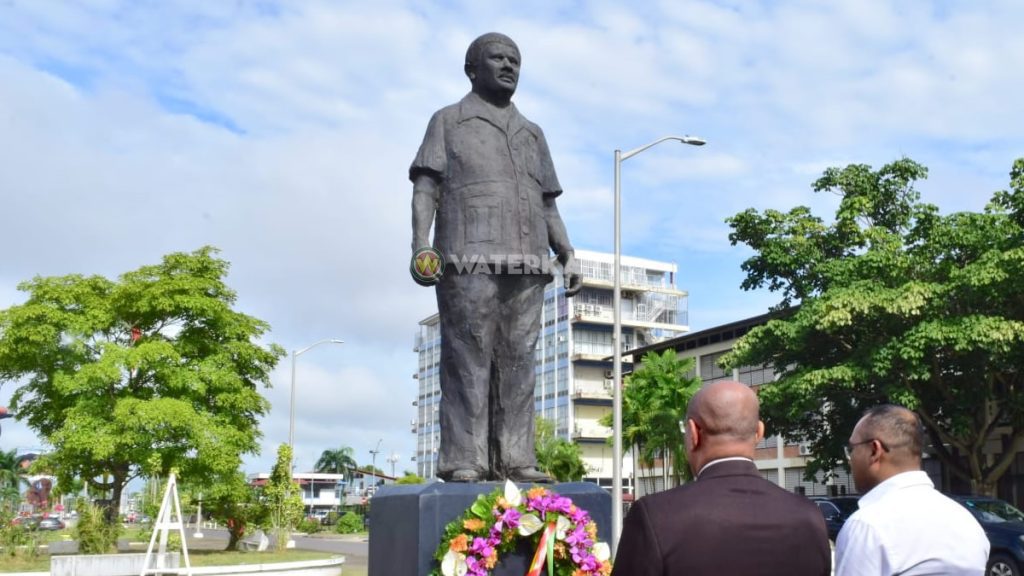 The statue of murdered union leader Cyrill Daal has secured a new spot on Pater Weidmanplein on Dr. Rue Sophie Redmond. The statue once stood on the grounds of the General Union of Trade Union Movements of Suriname (AVVS De Moederbond) on J. Lachmonstraat.

The board of the Moederbond, the management of Assuria NV and the family of the deceased Daal agreed that the statue deserved a better public place. After coordination with the Directorate of Culture and the Heritage Preservation Committee, it was decided to position the statue on Weidmanplein, where several monuments of major trade union leaders already stand. A ceremony was held on Thursday, November 24 to commemorate the moving of the statue.

Minister Steven Mac Andrew, responsible for labor policy, was present at the ceremony and indicated that moving the statue from a private site to a public one will enhance the appreciation of this great labor leader. This, especially given his contribution to the trade union system and to improving the welfare of the working class in Suriname.

Mac Andrew also said Daal’s statue now stands with other union comrades in arms, such as Fred Derby and Hendrik Sylvester. He therefore believes that society as a whole will benefit from offshoring and not just the family and the trade union movement, because looking at the image one can reflect on the struggle that the trade union movement has waged for the betterment of the lot of workers. and their families.

The Minister also took this opportunity to emphasize the importance of social dialogue and referred in this context to the concept of decent work, to which the social partners are committed. Mac Andrew also mentioned that he meets with RAVAKSUR almost monthly to discuss work issues to address issues discussed through consultation and collaboration.

Carmen Daal, daughter of the late union leader, was pleased with the public place where her father’s statue was donated. She sees it as an appreciation of her father’s struggle for the working class. Moederbond President Errol Snijders and Mario Merhai, CEO of Assuria NV, are convinced that with the new location of the statue, the name of this trade union leader will not be erased from Suriname’s history.

The statue was made by the famous artist Erwin de Vries and has great artistic value.