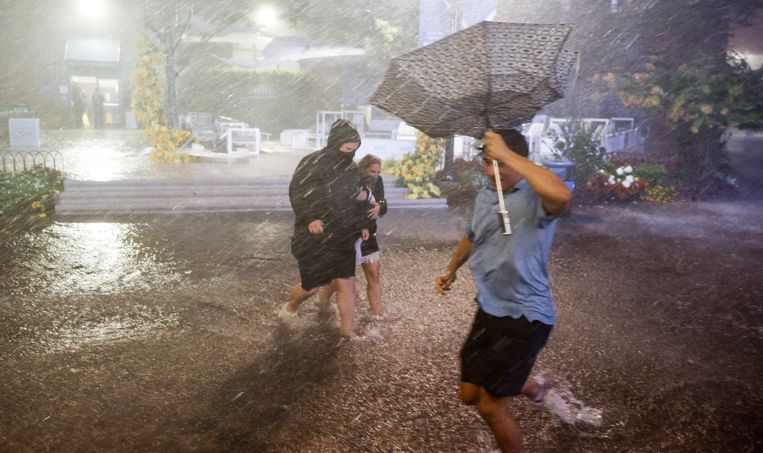 The unusually heavy rainfall led to dangerous situations on the roads and in cities from Wednesday evening. According to the Associated Press 8 people died in New Jersey, 3 in Pennsylvania and 12 in New York. New York Mayor Bill de Blasio called it a “historic weather event”. He banned all traffic until Thursday morning. The main access roads to the city were completely flooded.

Almost all metro lines have been closed. Several New York subway stations were flooded. A number of subways are stranded between stations, but carrier MTA says no one is in danger. “If you get stuck in a subway, stay in the car. It is the safest place, unless the driver decides otherwise, “the company wrote on Twitter. Images on social media show how water flows through various underground stations, the streets are completely under water.

De Blasio called on residents to remain vigilant. New Yorkers have also been given a warning on their cell phones to stay indoors unless instructed to evacuate. New Jersey Mayor Hector Lora told CNN know that the floods in his town killed at least one. It is an elderly man who was in his car. The vehicle was dragged by the water. Firefighters who tried to save the man found themselves under the car, but escaped unharmed.

The US Open tennis tournament, which takes place in the Queens borough, has interrupted a large number of games. The matches have also been postponed due to the extreme weather conditions. Only the indoor courts could be played for some time, although the roof of the Louis Armstrong stadium could not cope with the heavy rains.

Tornado warnings went into effect Wednesday in the states of Pennsylvania, New Jersey and Delaware. “This is a life threatening situation, the flying debris can be fatal,” the US Weather Service said. It is possible that the storm will also cause tornadoes in New York City, although forecasts still differ.

Parts of New Jersey fell 10 to 20 inches of rain, according to CNN. “Don’t go on the road, stay home and stay safe,” Gov. Phil Murphy said. There are at least 57,000 households in the state, according to The New York Times without power.

We are working to get customers off the trains after the bad weather of the evening. If you are on a train between stations the safest thing to do is stay on the train, FDNY is on the way. 1/2