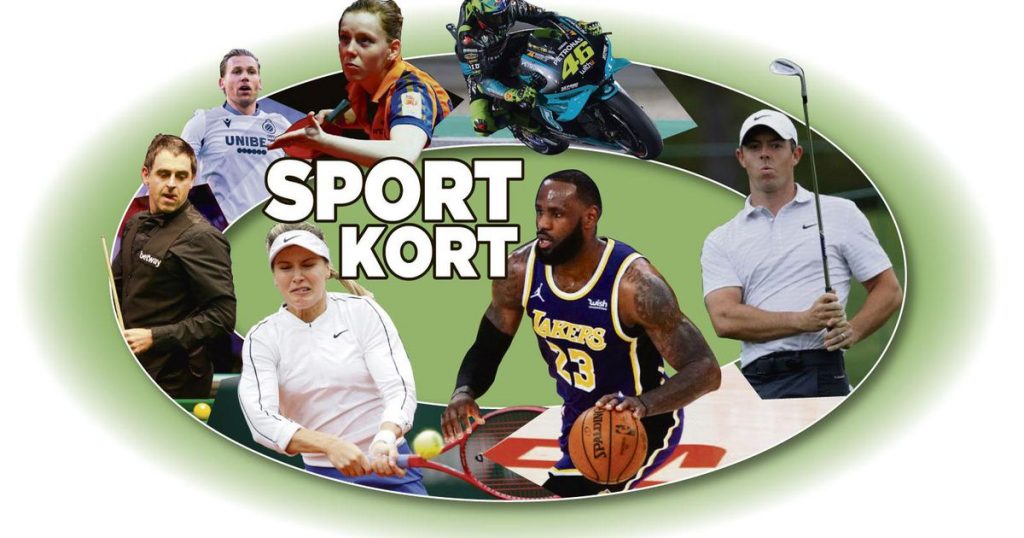 Argentina and Italy move up the world rankings

11:31: The football countries Italy and Argentina, winners of the European Championship and the Copa America respectively, have climbed the FIFA world rankings. Both have gained two places; Italy is now fifth, Argentina sixth.

Belgium remains number 1, although the country was a bit disappointing with elimination in the quarterfinals of the European Championship. Brazil, finalist of the Copa America, is second, ahead of France. The United States, which won the Gold Cup last summer, is now in 10th place.

The Dutch national team, which were eliminated in the round of 16 in the fight for the European title, are now 12th.

10:29 a.m.: Simona Halep was eliminated in the second round of the Montreal tournament on her return to the tennis court. The Romanian, who was granted a bye in the first round, lost in three sets to American Danielle Collins: 2-6 6-4 6-4.

Halep, 29, last played at a tournament in Rome in May, where she injured her calf. She then had to withdraw from Roland Garros, Wimbledon and the Tokyo Olympics.

His return to the Montreal tournament was also short-lived. Despite this, Halep was positive about his game. “After three months of playing little tennis, I am playing an almost three hour match at a very high level against a player who is currently winning matches and games. tournaments, “said the Romanian.

Collins, 27, won the Palermo tournament in late July and the San José tournament last week. She has been undefeated for 12 consecutive matches.

Jones out of Liverpool with concussion

08:11: Curtis Jones will be out of Liverpool next weekend in the season opener against Norwich. The midfielder appears to have suffered a concussion during the exhibition game with Osasuna last Monday. He was substituted in the first half.

“He’s feeling good again,” said coach Jürgen Klopp. “But the protocols prescribe a few days of compulsory rest for this injury. Of course, we stick to that. I expect Curtis to be able to practice again starting on Sunday.

Andy Robertson is also absent from Liverpool. The Scottish defender and international suffered an ankle injury during preparation. He hopes to be back in a few weeks.

08:04: Cyclo-cross racer Katie Compton, four-time vice-world champion, has ended her career. The 42-year-old American does so after a positive doping test, which resulted in a four-year suspension. “I’m innocent, but I can’t prove it,” Compton said.

Compton tested positive for anabolic steroids in September. “It wasn’t until early February that I was told that a re-analysis of the same sample had found an anabolic steroid,” Compton said. “I hired a lawyer and tried to find out how the substance got into my body, but since it was five months between the sample being taken and the report it turned out. impossible. So I decided to stop this expensive and difficult fight and accept the sanction.

Compton is her country’s most successful cyclocross racer. From 2004 to 2018, she won the United States Championship 15 times in a row. She has been on the podium five times during a world championship. She has won over 130 cyclocross races.

Before starting as a cyclo-cross racer, Compton won two gold medals, one silver and one bronze at the 2004 Paralympic Games in Athens. She did it in tandem, as a pilot for the blind Karissa Whitsell.

07:16: Four in ten professional football players in the Netherlands say that racism and other forms of discrimination are a regular feature of professional football. 14% experienced it themselves. For players with an immigrant background, this share is even higher at 25%. The Mulier Institute reports this after a survey of 118 professionals from the Eredivisie and Kitchen Champion division.

For the study, 1,044 professionals were approached through their captain. Although not everyone answered, the Institut Mulier speaks of a representative study, also because many speak of a taboo and indicated that they had difficulty speaking about it.

A quarter of players indicate that jokes or negative comments are sometimes made within their team about skin color, origin or religion. Opinions differ as to whether such jokes are unwanted.

A fifth of the players say that there is a taboo in professional football on discussing prejudices and stereotypes based on skin color and origin. This opinion is more frequent among players with an immigrant background (31%). These players in particular also find it important that more coaches, managers and administrators of color enter professional football (65 percent, compared to 14 percent of non-migratory players).

Regarding the fight against racism, the survey shows that almost all professional footballers believe that action should be taken against negative statements from the public or players regarding skin color, ethnicity or religion . Players assess the KNVB’s approach to racism with a narrow pass. The approach of their own club, the other players and themselves is more than satisfied.

Negative reactions from supporters, public opinion and societal norms and traditions are seen as the main obstacles to the fight against racism. Only a few players think clubs are a barrier. Besides the sanctions, the positive attention of football journalism, KNVB and clubs is considered the most important measure which contributes to the fight against racism in professional football.

The KNVB was not involved in the poll, but is aware of the result. “Anyone who discriminates and excludes others has no place in football,” replies the national football federation. “Football is a team sport. The profit is celebrated together and the loss is borne together. A match is not possible without opponents, referees, coaches and volunteers. Professional football is not possible without spectators and supporters.

In the Netherlands, around 8 million people are involved in one way or another in football. “Everyone plays a role and is welcome,” says the KNVB. “Football connects. We should not only be very proud of this, we should also keep it. To fight against discrimination, we have implemented around twenty new or reinforced measures over the past year and a half. For example, the duration of stadium bans has been doubled to 10 years and players can be banned from 5 to 10 matches. In addition to sanctions, we are also working hard on awareness, cooperation and identification. “

We also have personal conversations with professional football players to explain to them what we are doing in this area and to ask them about their personal experiences and ideas. “The border is clear: discrimination and exclusion are not tolerated in any form. Not by us and as far as we are concerned by no one. So let’s collectively reduce that 14 percent to 0 percent as quickly as possible. Because only zero is acceptable.