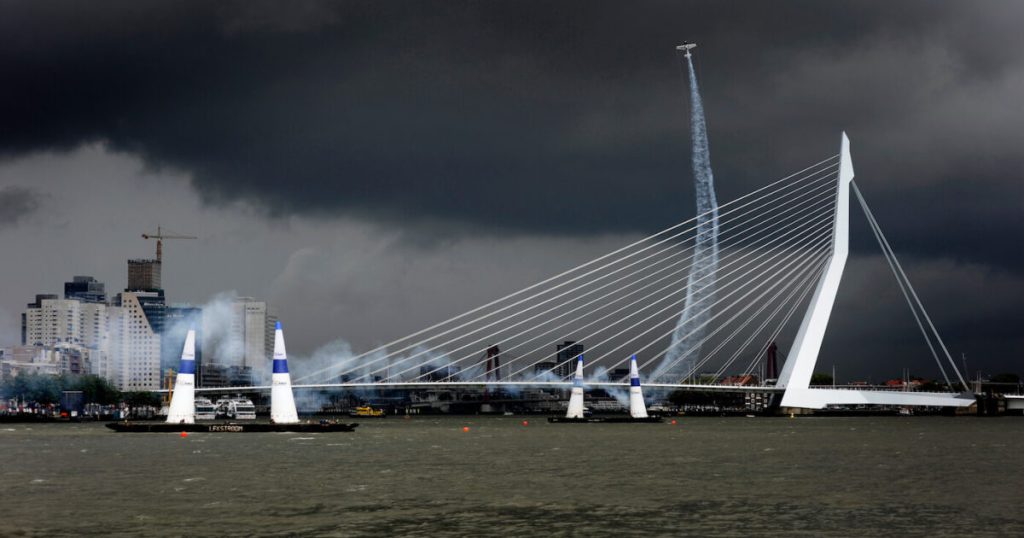 The Red Bull Air Race takes place twice in the Netherlands; in 2005 and 2008. With its port and its characteristic Landmarks an ideal location for the Red Bull Air Race. Zigzagging quickly and tilting constantly, the pilots pass at more than 300 km / h between the Air Gates, pylons inflated up to twenty meters high, and under the Erasmus Bridge. It is a spectacle that has never been seen in the Netherlands before and around 800,000 visitors take place on the banks of the Meuse.

The idea for the Red Bull Air Race came from stuntman Péter Besenyei. The Hungarian became a pilot and in 1990 took second place at the World Aerobatic Championships which revolve around stunts, originality and technical ability.

In Red Bull Air Races, speed is the deciding factor: which pilot will reach the finish line fastest, like a slalom skier with wings. Red Bull, always in search of big sporting ideas, saw something there and in 2002, Besenyei carried out the first test flight through the Air Gates. The following year, six drivers took part in the first official race in Zeltweg, Austria. A great success, which was repeated in Budapest the same year. A year later, the pilots visited three cities; again Budapest, Kemble and Reno, in the western United States.

Now is the time to broaden the concept. The Red Bull Air Race World Series will be introduced in 2005, a series of seven races – in addition to Rotterdam, also in Abu Dhabi, San Francisco and Budapest, among others. The best driver in the world has to win, which also changes the role of Red Bull.