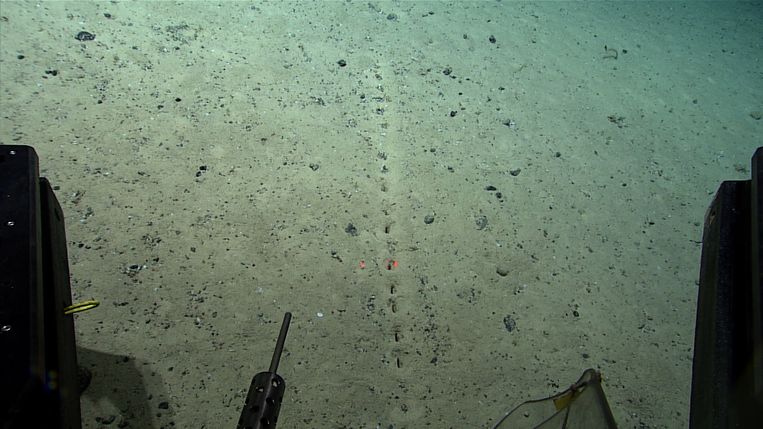 Given the small mounds of sediment surrounding the holes, they appear to have been dug by “something”, writes NOAA, an American institute that studies the oceans. This isn’t the first time scientists have come across something similar: Similar series of deep-sea holes were discovered as far back as 2004. No trace of the makers has ever been found, not this time either. It shows how hazy life on the high seas still is.

The Saturday #Okeanos diving, we saw several sub-linear sets of holes in the seabed. The origin of the holes puzzles scientists. The holes look like they were man-made, but the little piles of sediment around them suggest they were dug by… something.

What is YOUR hypothesis? pic.twitter.com/iGezxV9TK8

Precisely because of all these question marks, NOAA scientists sent an unmanned submarine into the depths this year. With that, they met last Saturday the first holes on north of the Azores, more than 2.5 kilometers deep. On Thursday, they saw holes nearly 500 kilometers away, more than a kilometer deep. It almost looks like humans punched through the seabed, that’s how tight the pattern is, notes NOAA. Sediment samples were taken with the submarine.

The holes are likely dug by bottom-dwelling animals or by bottom-dwelling organisms that, for example, stick body parts together for food, marine biologists wrote earlier this year. In the magazine Frontiers of Marine Science they describe that the holes are elongated and several centimeters long. They form straight or slightly curved rows several meters long in some cases. It is not known if they are connected by a tunnel.

In any case, it is clear that “something” has been making holes in the seabed for much longer. There are fossilized holes in fossilized pieces of petrified seabed hundreds of millions of years old. They can form all kinds of patterns: coiled, branched or in the form of pentagonal honeycomb structures.

These honeycombs were found on the seafloor as early as 1976. Researchers found them on the eastern flank of the Mid-Atlantic Ridge, the 10,000-mile-long undersea mountain range on the boundary between two tectonic plates drifting. These holes are interconnected with tunnels.

But even then, it remains a mystery where they came from. They could have been dug by an animal, but they could also be the remains of a sponge growing in the ground, wrote an international group of researchers. in 2009 after an in-depth analysis. Even genetic research has yielded no answers. A fascinating detail that has become apparent: these holes have a lip, the shape of which is such that fresh seawater is constantly pumped through the tunnels due to the movement of the water, and therefore possibly also food fresh.