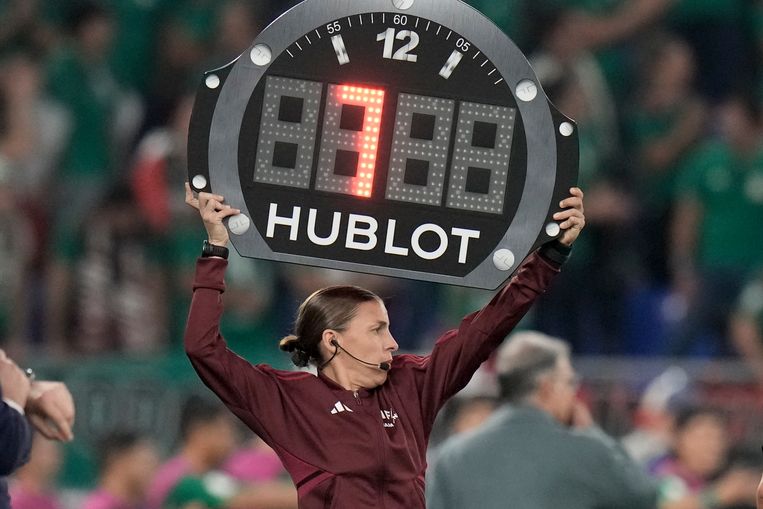 After forty games it started to stand out a bit and there was grumbling from many sides. Before the World Cup in Qatar, FIFA had the first of three female referees in the world’s most important football tournament. They just couldn’t whistle for even a minute.

Tuesday evening finally came the watchword for Stéphanie Frappart, who will be in charge of Costa Rica-Germany on Thursday. Until this meeting, she had only held up signs along the sideline. Like Japan’s Yoshimi Yamashita and Rwanda’s Salima Mukansanga, she was only used as a fourth official.

This has led to speculation about the host country, Qatar, where women do not have the same legal and social status as men. Could female referees join the list of beer and rainbow attributes in stadiums? Things that the Qataris, on closer inspection, did not really want to do.

After Frappart’s appointment, these theories can go to waste. The fact that it took a long time is mainly due to the complicated puzzle that referee boss Pierluigi Collina has to solve. He vowed ahead of the tournament that the women could lead every game, but added that it would depend on their “performance in training” and “our opinions, of course”.

The criteria are not well established, but it is clear that it is a mixture of refereeing qualities and political reasons. For example, all regions of the world must be represented at a World Cup. Matthew Conger from New Zealand is undoubtedly a great referee, but he is not necessarily among the top 36 in the world.

Experience at the highest level

Female referees have now also been thrown into this mix, of course with the intention of encouraging women to whistle. They just have to compete with referees who have dozens of top competitions to their name. Experience at the highest level matters, of course, and even a heavyweight like Frappart has to lose.

The Frenchwoman has been considered for years as the best female referee in the world. She led the 2019 Women’s World Cup final and also regularly refereed matches for the men. She refereed two Champions League matches, she was active in the last European Championship and led the European Super Cup match. She received a lot of praise for the way she did it, but her CV does not match that of István Kovács, for example.

The Romanian has refereed fourteen Champions League matches, the highlight of which was last season’s semi-final between Manchester City and Real Madrid. Moreover, he was also allowed to lead the Conference League final with Feyenoord. Kovács is also in Qatar and he hasn’t officiated a game yet, but this has only been criticized in his own country.

Does Frappart now have the right to go to work because questions about the absence of women have multiplied? Collina will undoubtedly deny this and refer to his earlier comments. Frappart has the right to whistle thanks to his “achievements” and “our opinions, of course”.