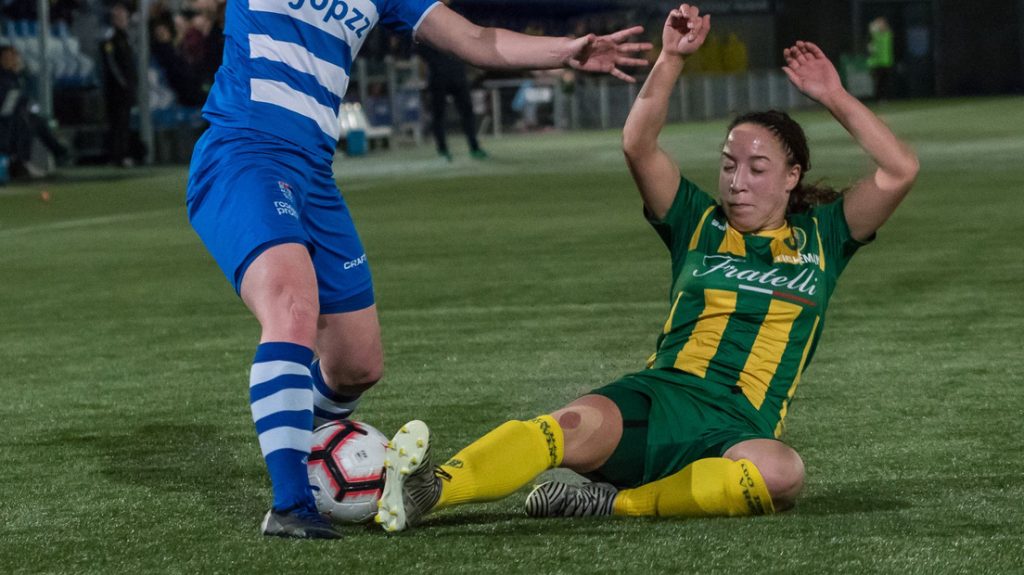 THE HAGUE – After 106 appearances, Sharona Tieleman’s employment with the women of ADO Den Haag ended last summer. After suffering serious knee injuries for the second time, the Zealand defender must leave ADO. However, she remains combative: “I have the impression that my football career is certainly not over yet. I want to get back in shape as soon as possible and regain the fun that I have missed the last few years. ‘

With a mother who plays soccer, the sport was taught from a young age to Sharona, 26, and her twin sister Sylvana. Watching training or matches and playing football in squares enabled the sisters to enroll from the age of eleven at the village club VV Vogelwaarde in Terneuzen. In this club, they played between the boys. “At that time, there were no women’s teams near us.”

Sharona’s talent did not go unnoticed, she was part of the national youth teams from an early age. “I was advised in Zeeland to play football at a higher level and train more often.” With this tip in his pocket, Tieleman decided to look for a new challenge. She has received offers from CTO Amsterdam (Center for Top Sport and Education which works in close collaboration with KNVB) and FC Twente. She trained with FC Twente for a week. “The level was very high, but Enschede is far away and I will go to Twente on my own.

From Ajax to ADO The Hague

At CTO Amsterdam, his twin sister was also allowed to test. “After that we heard we could both stay, it made it easier for me.” So, at the age of sixteen, Tieleman left the peaceful Zeeuws-Vlaanderen to realize her dream of becoming a professional footballer.

“At the CTO, living, studying and playing football were in harmony,” says Sharona. “We trained once or twice a day. The teenage dream of turning professional came even closer in the capital for the sisters as they were allowed to train once a week with Ajax Women at De Toekomst sports park. “Then we wore Ajax clothes. It was a great experience.

Victory in the cup final

Sharona developed so well in Amsterdam that she was allowed to join ADO Den Haag at the age of eighteen. ‘ADO was looking for a left-handed player who could fill the position of left-back and left-winger. At the time, they were the best in women’s football in the Netherlands with Sarina Wiegman as a coach. ‘

The first season Tieleman played at ADO, the team played in the BENE-League, a competition with Belgian and Dutch clubs. This led to several meetings with his twin sister Sylvana, who had made the move to the Flemish KAA Gent. In total, Tieleman played for ADO for seven years. The absolute highlight for Sharona was the cup final won against Ajax in the 2015-16 season. “ADO has always felt like home, I was in the right place at the club.”

But despite her existence as a semi-pro and her work in the care of the disabled, she had time to waste. That’s why she and her sister helped set up Zeeland Ladies beach soccer. In 2018, the first competition in the discipline of heavy football began. At the end of the season, the top four teams can move on to the final weekend, which takes place at The Hague Beach Stadium in Scheveningen. The winner could even take part in a final tournament in Portugal.

In “her own The Hague” Sharona became national champion with Beachsoccer Zeeland Ladies. ‘I was awarded to most valuable player in the premier beach soccer league. It was of course super cool. Unfortunately, I missed the final tournament in Portugal due to injuries. ‘

Best of all, Sharona was invited to the Dutch beach soccer team that year. However, this could not be combined with playing football at a premier league club. “What I like about beach soccer is that it’s very unpredictable, situations arise that you don’t often see on the pitch. I hope more people will see how much fun this sport is. ‘

In the summer of 2019, a visit to PEC Zwolle took a turn for the worse for Sharona. In this competition, she tore her anterior cruciate ligament and suffered damage to the meniscus. “I had never had a serious injury, but I immediately felt that this was not normal and that this injury could last a long time.”

Unfortunately, she was right, it was only after sixteen months of rehabilitation that she was able to make her comeback in a competition with the young teenager. “Anything that could go wrong during rehabilitation has gone wrong. I was in great pain and even had to have an additional operation because my meniscus was not properly sutured. In the long run, I even thought it would never work again.

Things turned out differently. After her match minutes at Jong ADO, she was again allowed to work minutes in the first team. “I didn’t feel like I had come back to my old level yet, I really felt like I had to find myself.” This research was nipped in the bud. She tore the anterior cruciate ligament on her other knee after a strange movement during a workout. “I could just get off the pitch this time, but I already knew it wasn’t once again.”

At ADO The Hague

Due to her knee injuries, Tieleman had to leave ADO and she is not rehabilitating in a football club. Still, the recovery is going well and there are no complications. “It makes this rehab much better than the last one, I can look to the future and do more and more.”

“I don’t think I came back after my first knee injury. Because my knee feels good now, I have confidence again and I want to play football. I don’t think my football career is over. I want to end my career with pleasure and not with injuries. I am now in contact with different clubs in the Netherlands and Belgium and my ambition is to return to the highest level. I also want to continue with beach soccer and maybe now play for the Dutch team. ‘