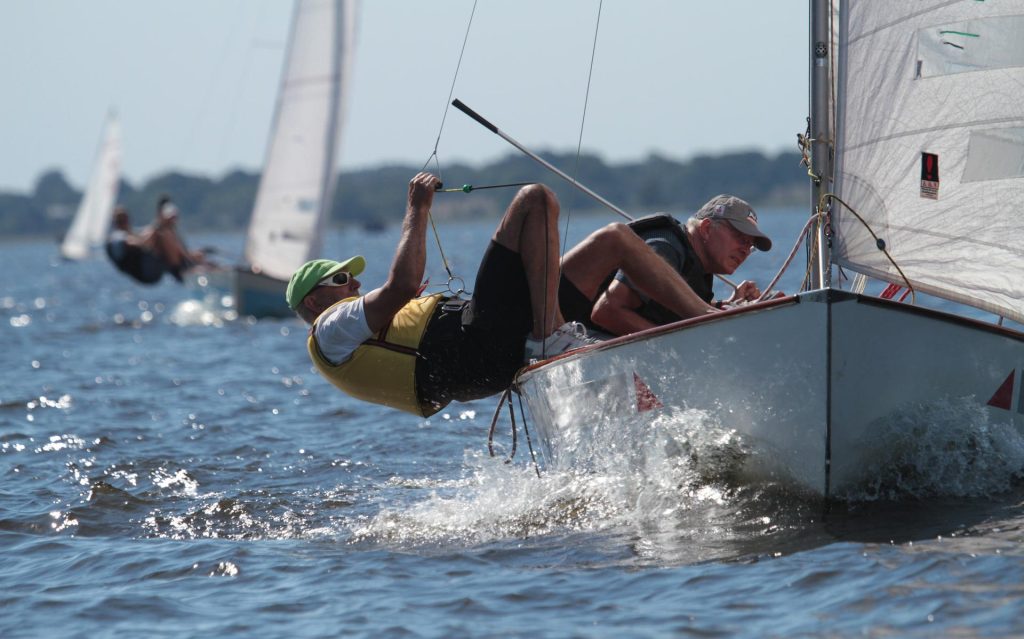 From Friday to Sunday, more than 50 two-man boats competed on the Beulakerwijde for the national championship in the sailing classes Spanker, Efsix and Javelin. The organization of the Sailing Association Belterwiede then reviewed this NK with satisfaction.

Early Thursday afternoon, the first sailors have already arrived at Beulaeke Haven. Get out on the water, explore and try it all. On Friday morning, the rest of the participants arrived. The Dutch national championships for the three sailing classes started on Friday afternoon at half past one. The gods of the Beulakerwijde were favorable to sailors, because on Friday and Saturday there was an easterly wind, stable in strength and direction. With force 3 to 4 winds, even the dangerous center of the Beulakerwijde remained silent.

On Friday, 3 sailing competitions were run and on Saturday 4. After these 7 competitions, the most consistent sailors were at the top as usual. Pascal and Mark Meijer from Breukelen (Utrecht) with their Efsix 2055, Willem Slendebroek and Fred Wildenburg from Ouddorp (North Holland) with their Javelin 578 (7 first places!) and Jan from Bokx and Jons Brack from Hoek (Zealand) with their Spanker 940 topped the leaderboard. These three crews had often chosen the right side of the Beulakerwijde and thus benefited from slightly stronger wind paths there.

The Saturday evening ended with a very pleasant joint barbecue and on Sunday morning at ten o’clock the Dutch championships resumed with the 3 remaining matches. These were handled smoothly by the race management of the Sailing Association Belterwiede, led by Dirk Evers. With a force 2 to 3 wind coming from the south, the NK participants again had no right to growl.

It was not exciting for Pascal and Marc Meijer in their Efsix on the final day: they skillfully built up their lead in the Dutch National Championship standings. At the Javelins, however, the tension hit leading duo Willem Slendebroek and Fred Wildenbrug. This time they became 6th, 4th and 7th, but their points lead was big enough to qualify as Dutch champions. It was so hot at the Spankers that some sailors lost sight of the whole. The crew of the Spanker 898, second in the standings, had a good race. So strong that the crew of the Spanker 940, Jan de Bokx and Jons Brack, crossed the finish line in silence. Full of doubts, these two sailed to port, but only then did it become clear that they had truly become national champions – with a 2 point lead.

In the Javelins, local favorites Jaap and Jeroen Kijkendijk of Meppel in their Javelin 540 sailed honorably in 12th place. After a week of tinkering with their boat, bad luck continues to haunt them. On Friday, the sword broke in the first match, meaning they couldn’t play the remaining matches on that opening day. In the evening they went to Grouw to collect a new sword. In Saturday’s final race, however, the helmsman ran across his back and on Sunday they only contested one race. Nevertheless, the Meppelers were not the last.