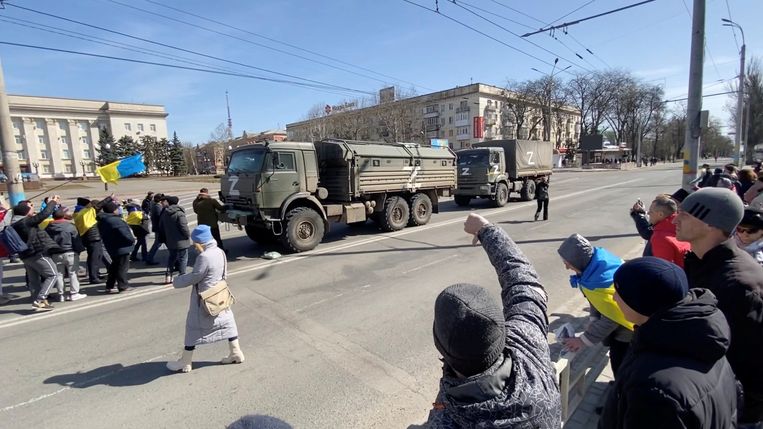 Kherson was the first major city in Ukraine to be captured by Russian troops after President Putin ordered the invasion in late February. The Russian army has now occupied almost the entire Kherson region and local authorities have been replaced by pro-Russian figures.

Initially, there were rumors that the Russian occupiers wanted to hold a referendum on declaring an “independent people’s republic” Kherson, like the republics the separatists proclaimed eight years ago in Donetsk and Luhansk . But those plans have apparently been scrapped.

Kirill Stremooesov, the Moscow-appointed governor of the Kherson region, said earlier this week that he would immediately ask Putin to join Russia without a referendum. According to him, on this basis, Putin can then annex Kherson to Russia by decree.

The Russians may have abandoned their popular vote plan because they fear it will end in a fiasco. According to the inhabitants of Kherson, only a minority of the population supports the Russians, even now about 40% of the inhabitants have fled.

The incorporation would go against the assurances given by Putin when announcing the military operation. He then declared that Russia had no intention of occupying Ukrainian territory. But Kremlin spokesman Dmitry Peskov said this week that incorporation was well and truly on the menu, if locals agree. Earlier, Andrey Turchak, one of the leaders of Putin’s “United Russia” party, had already said during a visit to Kherson that Russia would stay in Kherson “for good”.

Russia is keen to keep control of the region, as it is part of a land corridor to Crimea, the Ukrainian peninsula that Russia annexed in 2014. In addition, the region is of great importance for supply in Crimean water.

If Russia does annex Kherson, it will mean the final end of any negotiations with Ukraine for a peace settlement. President Zelensky has already announced that he would never accept a deal under which Russia could annex entire parts of Ukraine. Mikhail Podoljak, chief adviser to Zelensky, scorned Stremooesov’s announcement. “The occupiers can ask to join Mars or Jupiter,” he said, “but the Ukrainian army will liberate Kherson.”

Militarily, the Russians are firmly in control of Kherson at the moment, but politically their position is still fragile. In the first weeks after the capture of the city by Russian troops, demonstrations against the occupiers took place almost daily. This decreased after the hard action of the army. Still, some residents took to the streets on May 9, when the Russian military and pro-Moscow locals held a Victory Day parade. The army immediately dispersed the demonstrators.

Hundreds of people took part in the parade, carrying Soviet flags and a banner that read: “We are the children of the victors”. Residents say a significant number had been brought in by the military on buses from Russian-occupied Crimea.

Despite popular protests, the new pro-Moscow authorities are already busy preparing the region to join Russia. The ruble will soon be introduced as a means of payment instead of the Ukrainian hryvnja.

Stremooesov also alluded to the distribution of Russian passports to the population so that Putin could set himself up as a protector. This is a strategy that Moscow has also followed in the people’s republics that proclaimed separatists in the Donbass.