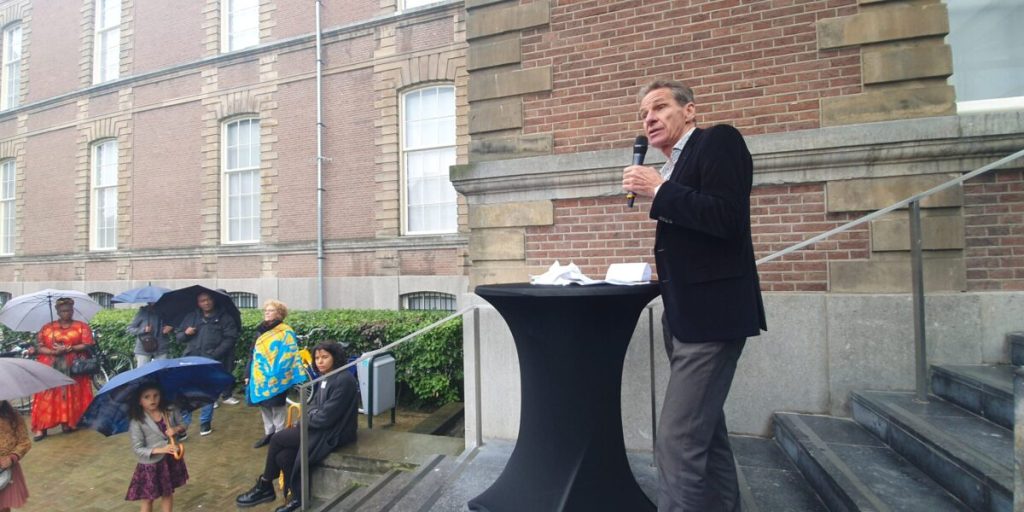 Professor Doctor Gert Oostindie was appointed Officer of the Order of Orange-Nassau this afternoon. Oostindie received the award when he retired as director of KITLV-KNAW.

Mayor Lenferink expressed his great appreciation for the crucial role Oostindie played in earning science in a special way, with administrative strength and commitment. But Oostindie also stood out in the social debate and for the improvement of relations within the Kingdom of the Netherlands.

Oostindie’s closest colleagues at the Royal Institute of Linguistics, Terroir and Ethnology of the Royal Dutch Academy of Sciences characterize Oostindie as a source of inspiration due to his scientific productivity and versatility. In addition, he is also appreciated for his commitment to the link between science and society. His humility, his sensitivity and his expertise make him someone with whom everyone enjoys working.

Excellent
The KITLV-KNAW Institute studies extremely sensitive topics. Oostindie has played a crucial role in improving understanding of Dutch relations with Indonesia and the Caribbean. Despite the budget cuts, he managed to transform the institute into a strongly rejuvenated and thriving institute that focuses exclusively on research. Under his leadership, publications were widely published and external funds were acquired. The KITLV-KNAW even received the highest score, excellent, in the international review in 2018.

Internationally renowned scientist
Professor Oostindie is known around the world as a leading scientist in the research and understanding of sensitive topics such as memory, forgetting and commemoration of the past of slavery and the past (post )colonial. Zijn rol in het maatschappelijke debat is van grote betekenis in een tijd van polarisatie, waarbij men zich in de Nederlandse samenleving breed bewust wordt van het belang het debat over dat gedeeld verleden in alle openheid te voeren, alle perspectieven naar voren te voeren To do.

Oostindie also succeeded in convincing Dutch politicians of the great importance and urgency of research on the period 1945-1950 in the former Dutch East Indies, the period of decolonization. Five departments have commissioned the study, which will be completed shortly. An achievement of exceptional importance. Gert Oostindie was also the driving force behind in-depth research into Rotterdam’s colonial and slavery past.