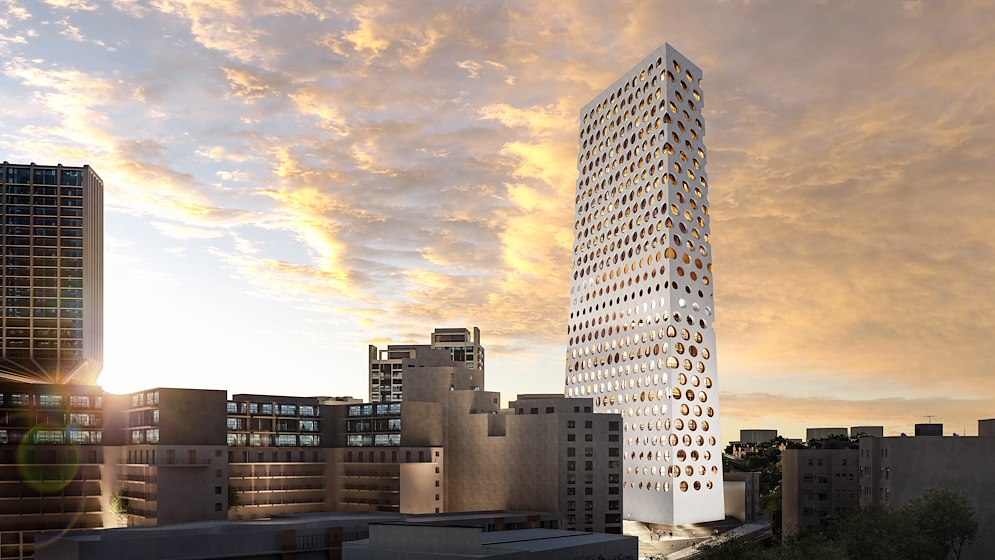 The Rotterdam-based architectural firm 7478 worked with Maltese firm Christian Spiteri Architects to design an iconic mixed-use tower in Malta. The design stems from the architects’ belief that the striking high-rise buildings on the site are smarter than a conventional building that leaves no public space.

7478 and Christian Spiteri Architect carried out the design of the 33-story tower on behalf of the developer of the PX Lettings project. The building is expected to accommodate apartments on the upper floors and offices in the lower part of the building, with catering facilities in the plinth. The plan also includes underground parking on 5 levels.

Create a public space
The footprint of the project covers only 32% of its land, leaving room for a large space that the architects want to make fully accessible to the public. The architects believe that high-rise buildings in such a densely populated area are a better choice than filling the site “with a conventional characterless block that would occupy the entire site and leave no public space open,” they explain.

On an island like Malta, where arable land is scarce, it would be obvious that the developer would completely occupy the land with a horizontally oriented building, explains architect Alessandro De Santis from 7478. “Instead, we chose, with our client, to design high-rise buildings in this specific location, which is already very urbanized.

“This is the best way to preserve and improve public spaces,” continues De Santis. “Freeing up more land creates an open space accessible to all.”

Simplicity and solidity
With the design, the architects also want to respond to what they call “the architectural inconsistency of the immediate environment”. Instead, they have set up a building that creates a clear identity. The design of the tower is inspired by the austerity and at the same time the powerful appearance of the rock formations of Malta.

With their design of the concrete tower, the architects aspire to architectural purity, they explain. They omit anything that is not essential. “It does away with traditional double-walled ornaments and cladding in favor of an elegant, slim and powerful silhouette,” the architects said.

Functional
The building tapers upwards to reduce shadows. Round windows form the facade openings. All service areas and traffic centers are placed on the south side. Thus, the design protects the living spaces from the blazing sun, while the view of the Mediterranean Sea to the north is optimized.

“Malta is an incredibly beautiful island and we try to emphasize this through the beauty and structural purity of the building, while ensuring that it is both functional and climatic,” says architect Federico Pompignoli from 7478. “We hope that this ambitious project will be an important building for Malta. “

With design, architectural firms strive to achieve a high degree of ecological sustainability. The ambition is to obtain LEED Gold certification. A planning permit has been requested and is currently being examined by the local planning authority.